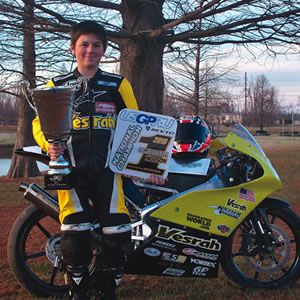 What type of motorcycle do you ride?

For road racing, I ride a Honda MD250H Moriwaki – a 250cc 4-stroke, and I started riding a Suzuki GSXR 600 last year and will be racing that more this season, along with the 250H.  For dirt track racing, I ride a Suzuki 250cc RMZ.
Why did you select that model?

I rode a 125 for a while, but it looked like the Moriwaki would be easier and less expensive to maintain, plus, Honda was offering contingency money to race in sponsored classes in the WERA and USGPRU in 2009, and in USGPRU for 2010. We thought that if we could get a bike that was easier to keep up and possibly win some money, that was a good situation. My dirt track bike was a bike I was able to get access to through the Vesrah Suzuki team (Mark Junge) and Dave Burke Motorsports (Travis Smith).

What else have you ridden?

Where did you get your bike?

All of my Honda Moriwaki bikes have been purchased from Heritage Honda in Maysville, Ky. My Suzuki 600cc came from the Vesrah Suzuki team, and my Suzuki 250cc dirt tracker is from Vesrah Suzuki and Dave Burke Motorsports.

What aftermarket parts are on your bikes?

On my Honda, the stock bike is all stock – no other parts, except my gas tank cover is removed because I am kind of small and it helps me get up on the bike better. On my modified Moriwaki, most of the bike is stock, but there are some internal changes handled by Mark Junge, who builds the engines according to the race rules. My Suzuki 600 bike has some aftermarket parts, like the pro team has — Yoshimura exhaust systems, GPR stabilizers and controls, and Bazzaz computer.

Who works on your bikes?

What dealerships do you visit in your local area?

King Cycle and The Boatman.

Who sponsors your racing?

What’s going on with your racing?

I just returned from Bike Week at Daytona Beach, Fla., racing in the AMA Winter Dirt Track Nationals. I finished second and third overall in the five-day competition.  My road race season will start on April 8 at the Talladega Gran Prix Raceway. I finished the 2010 season as the 2010 MD250H National Champion and East Coast Champion, and I finished third overall in the USGPRU Moto 3 Championship. At the Moto GP race at Indianapolis in 2010, I had a second and a third to finish on the podium at both races.

How did you get into motorcycle racing?

My dad has had a motorcycle for most of my life and one of my grandfathers has, too, so I thought I needed one. I asked for a motorcycle for Christmas when I was 2 – a Yamaha PW 50 that sat in our kitchen, and I would “ride” it. It didn’t have gas or oil in it but it sat on a stand so I could work the gas and brakes and “work” on it with my little tools. I learned how to tell my left from my right by studying the brake and gas set-up of my motorcycle.

My Dad knew the Hayden family, and he and my Mom took me to a couple of AMA races to watch them. I have a really cool picture from the year Nicky won the Daytona 200. Their dad, Earl, let me stand with him on the stage and hold Nicky’s trophy. The whole thing — the crowd, the excitement, the cool bikes and the pits — I liked it all. My mom and dad let me race my first dirt track race at age 3 ½, and I have been doing that ever since that time.

I started road racing at age 9, with the help of Tryce Welch, who modified one of my dirt trackers to a road race bike. I like the ride-n-slide motion of the dirt tracking, but I fell in love with the grip of the road race tires and how you could ride them into the corners. Cornerspeed Race Schools based at Virginia International Speedway let me come to their road race schools to learn the road race bikes, and I worked with their instructors at their road race and dirt track schools. They introduced me to the WERA race organization who has given me a lot of opportunity to race as a young rider. I raced in the USGPRU last year, which was a great
experience, too. I still like dirt tracking a lot, and it is good training for road racing, but I can’t get enough of the the feel of riding a road racer, getting dressed in my leathers, closing my shield to get in race mode and looking for a good place to drag my knee!