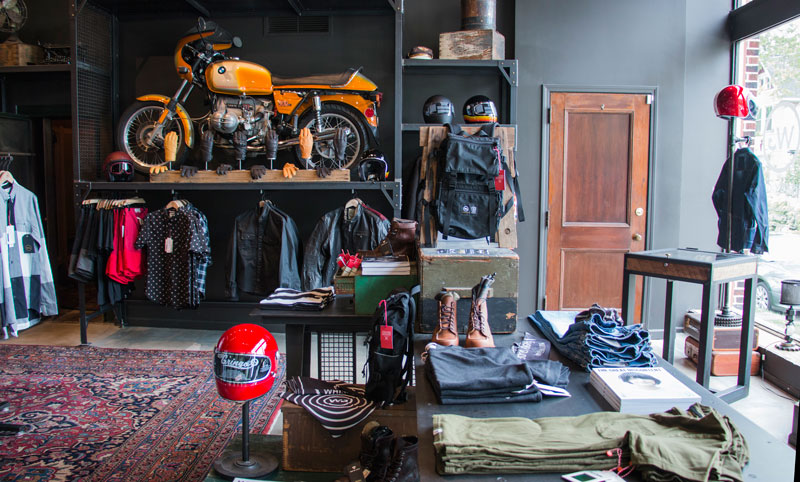 Located in the bustling neighborhood of Ohio City just outside of downtown Cleveland, Ohio is home base for Whiskey Grade, a moto fashion and fuel-inspired apparel store.

[dropcap]L[/dropcap]ocated in the bustling neighborhood of Ohio City just outside of downtown Cleveland, Ohio is home base for Whiskey Grade, a moto fashion and fuel-inspired apparel store. It’s a different concept than most people are used to seeing in the motorcycle industry and for that reason it’s attracting a new crowd to the sport in just its first year.

“People see this and they think it’s different and neat,” says Tom Wronkovich, owner of Whiskey Grade. “I’ve always felt that there has been a lot of everybody looking the same in motorcycling. If you walked into one of my Harley stores, everybody looks the same. Even in European stores or Metric stores everybody seems to have the way they dress, which I don’t have a problem with, but I felt it was time for something different.”

Wronkovich has been in the motorcycle industry for 30-plus years. He’s been a franchised dealer for just about everybody – Honda, Kawasaki, Suzuki, Ducati, Harley-Davidson, Polaris, etc. He currently owns three Harley dealerships in addition to the Whiskey Grade stores.

“Whether you’re Honda, Harley or whatever, at the end of the day they make the rules,” Wronkovich says. “They say this is the product you need to take. I’m at a point now from inception to sale it’s all me. That’s why I wanted to manufacture because I wanted complete control over the entire process and I’ve been a very fashion-oriented guy anyway.”

Whiskey Grade is a Cleveland-based company with other locations in Denver and Los Angeles and manufacturing in California. The store doesn’t focus on functional riding gear, but rather moto fashion.

“With the women’s apparel we swing the pendulum to stuff that is very lacy and very dressy. It’s not unusual to see a Whiskey Grade woman in a beautiful white lace dress with a leather jacket on and maybe some combat boots or high heels. That’s where the look is going right now.”

Just like other well-known retail stores, Whiskey Grade wants you to know when you’re in one of its locations. There is always a little bit of a look and feel so that you can tell you’re in a Whiskey Grade store. Scents and color cues remind people where they are.

“The interesting thing we’ve seen in regards to Whiskey Grade is our business among non-riders,” he says. “We sell Roland Sands Design jackets, and 75% of those jackets go to non-riders because they like the fashion. The majority of the people we sell to are non-riders. You have to remember, less than 3% of the population in the U.S. rides a motorcycle. That means 97% of people out there might want a motorcycle, or can relate to a motorcycle, but they’re never going to buy one. However, they would buy the apparel that is inspired from that.”

“We are starting to see it already this year and sales trending down for no real reason at all other than people are missing customers,” he says. “Harley says it has another 10-15 years out of the Baby Boomers, but I’m thinking we’ll be lucky if we get five years. The youngest Baby Boomer is 51-52 years old, so what’s next?”
Wronkovich is hopeful Whiskey Grade, and its neighbor, the newly opened Ohio City Moto, are part of the answer.

“Whiskey Grade and Ohio City Moto stem out a bit because right now the median age of a Harley-Davidson owner is 52 years old,” Wronkovich says. “The median age of a motorcycle rider in general is 45-46, and it’s not getting any younger. There aren’t many used motorcycle places out there that are offering reasonably priced motorcycles from $1,500 to $5,000.”

Lucky for Wronkovich and Whiskey Grade, the Ohio City location happened to have an adjoining building space open for rent, almost too perfect for a used motorcycle dealership that could attract new people to the sport.

“The space for Ohio City Moto is the right size, meets all the state requirements and is in the right part of town for us, and we’re working on building it up,” Wronkovich says. “The landlord is a motorcycle enthusiast and has some vintage Triumphs. He kept showing the space to architects, engineers, nail salons, gyms, and everything I didn’t want. Finally, I said, ‘Let’s put a motorcycle store in here. That way it supports what we are doing next door real nicely, and with my three Harley dealerships I have the ability to get used inventory in here.’”

Its hottest selling bikes are older Japanese motorcycles like a Concourse or CB550 and things that are priced around the $2,000 to $5,000 price range, including scooters.

While Ohio City Moto doesn’t currently operate under any one OEM, Wronkovich was taking meetings with Royal Enfield to help the dealership get off the ground.
“One of the reasons I’m excited about Royal Enfield is it is better to operate under some sort of OEM flag,” he says. “It does help to get their advertising and things like that. I’m anxious to meet with them because they have the ability right now to change the rules without breaking the law. They have the ability to change things up because they are at the helm of a much smaller ship and they can ebb and flow much faster.”

Another unique aspect you’ll notice about Ohio City Moto is there isn’t a parts department or service department. The shop partners with Skidmark Garage and Cleveland Cycle Works to take care of those needs.

“We sell Cleveland Cycle Works’ bikes too,” Wronkovich says. It’s a bike that is 250cc brand new for $3,000. They are bullet proof and don’t break. And, when that person is ready to move to the next step, we can give them pretty much what they paid for the bike against a new or used motorcycle. It gets them into the sport and allows them to experience it. If they enjoy it, then they can step up to a bigger displacement motorcycle and it’s very cost effective.”

Ohio City Moto markets on Cycle Trader, Craigslist and eBay to get traffic. However, the best results are from getting out and actually going places.
“We just moved in a month ago and we are still figuring out what we are doing and where we are headed,” Wronkovich notes.

In the meantime, Wronkovich continues to spread the word about Whiskey Grade and Ohio City Moto.

“We set up meet and greets, bike nights and other events,” he says. “We also have a lot of non-moto events we go to such as the Cleveland Flea, Miami Yacht Show, a PGA event in Houston, etc. We try to do things where people would never see our brand or motorcycles at all. People see a motorcycle and it attracts the men, and then the women see that we have dresses and they start looking around, too.

“Music is a big part of what we do, too. We bring in acoustic acts here at the store. Everyone does bike nights, but we want to do bizarre. We’re going to bring in different vendors like a purse vendor or Moroccan blanket vendor or food trucks to attract people and mix it with the motorcycles. We like mashups and stuff that doesn’t necessarily belong together. That’s what gets people’s attention these days.”

To further attract attention and a different crowd to his store and the sport, Wronkovich is currently in the midst of doing a traveling event called Motos Across America. 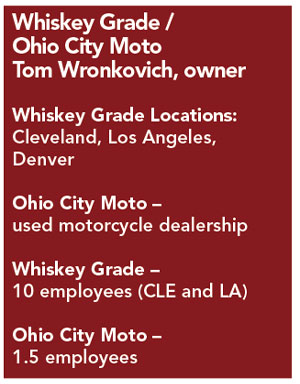 “Progressive, Royal Enfield and Rebel Yell Whiskey are all sponsoring us,” he says. “We just did four cities – Baltimore, Raleigh, Nashville, Indianapolis – and we have another dozen to go to. The vast majority of the people coming to these events are in their early 20s. We bring a Royal Enfield around with us and people are attracted to the price point. For $4,000 – $5,000 you’re rolling. It’s where you start, and then you progress into the Harley-Davidson or whatever else.”

With three Harley dealerships, three Whiskey Grades and Ohio City Moto, you may be wondering how Wronkovich finds time for it all.

“I really enjoy what I do,” he says. “I’m having a blast. I have operating partners at all my Harley stores who are on point, and the same thing here. One of my strengths is team building and getting the right people on the bus and in the right seat. Whiskey Grade is at the point now that we are hitting on all cylinders and it’s a matter of juicing up and getting more horsepower.”