Did 2007 end with a whimper for your business? Where do we go from here?

An industry friend just asked what happened to the motorcycle market. "Where are the sales? This past year was unlike any year ever." This is a valid question if you have been involved in the powersports industry for the past decade.

You might find it hard to believe, but things have been worse, way worse! Just ask some of the old guard who were around when ATC sales were outlawed! However after a full 14 consecutive years of double-digit growth, it looks like something finally had to give. Historically the market went through up-and-down cycles every three to five years until we had this unprecedented record growth.

According to the most recent MIC data, sales for September ’07 were down 12% compared to the previous year. Bad news? Maybe, but collectively more than 116,175 units were still sold in the month. That ain’t chicken feed, my friends. Year-to-date, more than 1.25 million motorcycles and ATVs were sold … the industry hasn’t seen these kind of sales numbers since the 1970s, according to Cycle World publisher and MIC board of directors chairman, Larry Little.

I agree with my friend that this past year was unlike any year ever … it was better! When I started working at another trade publication in the fall of 1991, the industry was coming off five straight years of record losses, reaching an all-time low of 278,000 total units in 1992. I had to wonder why I was getting back into publishing in the first place and really wondered why I would take on a trade publication in a dying industry. Then we took off for a great run of double-digit growth through 2005! In my historical way of thinking, a little market correction is long overdue.

Sure, total sales were off by about 8.2% in 2007, but given that the aftermarket now has 1.25 million more new units to accessorize and repair, is it really that bad? Looking forward, 2008 has the potential to be a banner year for the folks who are ready for the market correction.

"Through years of economic challenges, veteran riders, new riders, Americans from all walks of life have made motorcycling part of their lives," is what Larry stated in the official MIC announcements. "Our research tells us that today’s motorcyclists tend to have a more optimistic view of life, and that’s played a role in new bike sales."

Of course it is easy for magazine guys like Larry and I to play armchair optimist … we aren’t faced with flooring charges or the fact that we had to lay off good employees during the holidays. Rather than me playing Pollyanna, you want the truth? "You can’t handle the truth!" as Jack Nicholson suggests in A Few Good Men. I’m afraid some folks are going to find the days of pre-ordered Harleys priced at a premium and on a year-long waiting list are behind us.

Make no mistake, the low hanging fruit is gone, so all of us in this industry are going to have to work harder and smarter if we want to survive this coming correction cycle. Even putting on my best rose-tinted glasses, things don’t look so rosy for the next 18-24 months for those companies unable to respond to the changing face of the marketplace. What’s worse, the dealers in the trenches are going to have to bear the brunt of it, again!

"Think about the situation that we all faced in 2007: the level of business dropped, the level of inventory was high, and the level of customers coming through the door was low," says dealer Bill Little in this month’s Practice What You Preach column. "Many of us had been riding high from elevated sales in 2006 and life was good when we placed orders for 2007 product."

Of course the road to hell is paved with good intentions and even Bill noticed that the blush was well off the rose by Q4. "By fall, many of us found our fingers aching from being crossed so hard, wishing that people would suddenly burst through the doors. The inventory pile, while smaller, still cast a shadow of doubt across the lot, and the door counter showed little more than employee lunch breaks and the occasional traveler looking for a restroom. Staffing was at an all-time low, parenthesis had begun to form around the bottom of the P&L …"

Okay, maybe even I can’t handle the truth when my friend Bill starts painting such a bleak picture. But a few good men and more good dealers are going to figure out ways to excel in this down market, they always do and always will.

"Fortunately, most of us will pull through this downturn — a little beat up, a little scarred, but hopefully much better for having gone through it," Bill believes. "The truth is that you can’t always be the best at the game, but you never want to lose the same way twice. For that, you need to learn from your mistakes and become stronger for having made them." 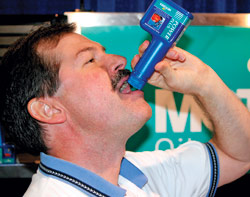 Where did the market go? It is still out there for those willing to learn from their mistakes. And that is the truth!

Slick stuff! I was looking for a magic elixir to survive the malaise of a motorcycle market down-turn, and we just might have hit on the right formula for your business in this issue’s comprehensive look at oils and lubes. The days of easy money are gone, but there are still ways to grease the skids!