[dropcap]W[/dropcap]e received an invite from Tim Buche, Motorcycle Industry Council’s president, to join them in D.C. for the third annual MIC Capitol Hill Fly-In late last month. Problem was, it was just days before we were going to press and we didn’t have a lot of time to spare. Luckily, D.C. is a short hop for us and we made it there in time to have dinner with the MIC Board and Dealer Advisory Council members.

For the MIC Board, fighting for our rights is more than just the name of a Beastie Boys song. Here are some key issues that MIC members lobbied for at the Fly-In:

The RPM Act – which affects powersports and racing industries including the Specialty Equipment Marketing Association (SEMA) and others that have rallied around this issue. The 1990 Clean Air Act authorized the EPA to regulate motor vehicles but had never applied to vehicles converted for racing. In July 2015, EPA inserted language that would make it illegal to convert a vehicle for competition, which naturally got our attention. MIC is trying to rally support for HR 4715, Recognizing the Protection of Motorsports Act (RPM Act), which will clarify that these vehicles are not subject to anti-tampering.

Protecting access to public lands is another major issue for the industry and therefore much of the battle is to continue to fight for off-road access for all of our great ATVs, UTVs and dirtbikes. The Antiquities Act of 1906 grants the President the authority to designate landmarks and other objects of historic or scientific interest on public lands as national monuments. OHV use in designated National Monuments will most certainly be restricted if passed, so it’s imperative to gain support to prohibit use of funding for this provision. 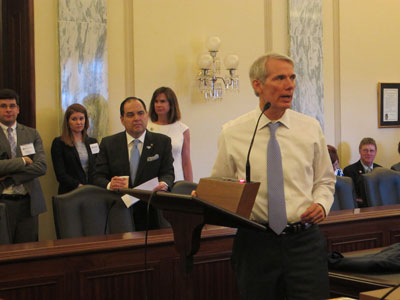 MIC Board Members lobbying at the office of Ohio Senator Rob Portman.

Other key issues on the table were for Reforming the CFPB Indirect Auto Financing Guidance Act. This could potentially eliminate a dealer’s ability to discount credit in the showroom or push marginally creditworthy consumers out of the marketplace for credit all together. HR 1737 would allow public scrutiny of the Consumer Financial Protection Bureau’s attempt to change the vehicle loan market through “guidance.”

These are just a few of issues that we should all be fighting for if we want our industry to survive… and hopefully allow it to flourish. A number of Congress members are on our side, but we need help to gain more of their support. While there are also a growing number of dealers joining MIC, Tim Buche says he would love to have more dealers on the Advisory Council and participating in the Fly-In next year. This is an election season after all, so make your votes count in the industry as well.