Through a partnership with the American Le Mans Series, the company will auction off a “Special Edition” container signed by the drivers who participated in the 2012 Petit Le Mans. Proceeds from the winning bid will be donated to the Prevent Cancer Foundation. The winning bidder will also receive two tickets to a 2013 American Le Mans Series event. 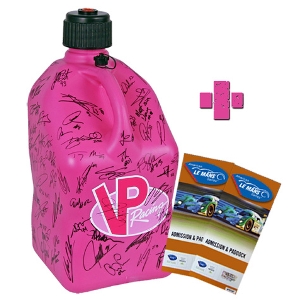 In support of Breast Cancer Awareness, VP Racing Fuels and the American Le Mans Series presented by Tequila Patrón are auctioning off a “Special Edition” pink VP Motorsport Container autographed by the drivers who participated in the 2012 Petit Le Mans, including winners Andrea Belicchi, Neel Jani and Nicolas Prost, as well as Ryan Hunter-Reay, Bruno Junqueira, Scott Sharp, Patrick Dempsey and many others.

Proceeds from the winning bid will be donated to the Prevent Cancer Foundation for its cancer prevention research, education and community outreach programs. In addition to the autographed container, the winning bidder will receive two tickets to a 2013 American Le Mans Series event.

VP introduced the pink Motorsport Containers in October in recognition of Breast Cancer Awareness Month, and has been donating a portion of the sale proceeds from each container to the Prevent Cancer Foundation. “These pink containers have really struck a chord with race fans all over the country who are anxious to fight this disease in any way they can,” said Alan Cerwick, president of VP Racing Fuels. “We appreciate the American Le Mans Series’ support of this auction and the drivers’ commitment in autographing the container.”

“We’re very pleased that so many of our drivers supported this important charity by adding their autographs to the container, making it a valuable collector’s item,” said ALMS Vice President Integrated Marketing Communications Ed Triolo. “I hope fans will be generous with their bids, as all proceeds will go to the foundation.”

Auction bids can be submitted on VP’s website at vpracingfuels.com/alms-charity-auction, where visitors also will find the status of the latest bid. Bids must be received by Monday, Dec. 17 at 10 a.m. CST and bidders must be 18 years of age or older to be eligible.