The product was launched in October as Breast Cancer Awareness Month special release, but the company will keep it as a regular stock item. For each sale of the product, VP will donate $2.50 to the Prevent Cancer Foundation; donations will double during the month of October. 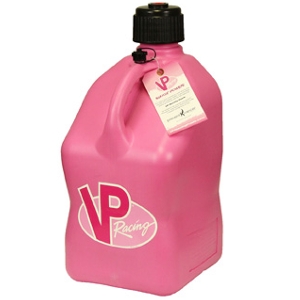 VP Racing Fuels Inc. recently reported that donations to the Prevent Cancer Foundation, in conjunction with sales of pink VP Motorsport Containers, have reached $2,695. This amount is in addition to an auction bid of $2,000 given to the foundation last month for a pink container autographed by three top NHRA drivers.

VP also announced the pink containers, which launched in October as part of Breast Cancer Awareness Month, will be made available as a regular stock item. Donations to the foundation will continue with each sale.

“Our original intent was to offer the pink containers as a ‘special edition’ only during Breast Cancer Awareness Month, but due to their popularity we decided to extend production to generate additional contributions,” said Alan Cerwick, president of VP Racing Fuels. “Going forward, we’ll donate $2.50 to the Prevent Cancer Foundation with each sale of a pink container, while during each Breast Cancer Awareness Month, we’ll double that to $5 per container as we did this year.

“In the spirit of the upcoming holidays, we hope the pink containers will be viewed as the ideal gift – meeting a need among the race fans in your family while also providing a gift to a great cause,” Cerwick concluded.