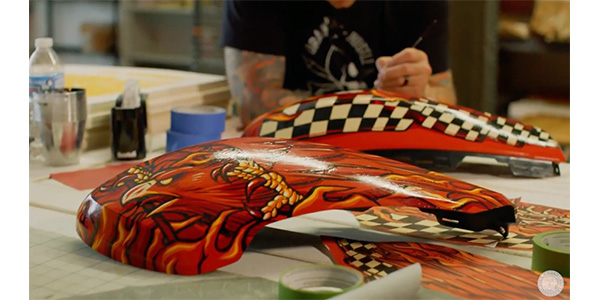 In a dynamic, creative display of artisanship, Indian Motorcycle, America’s first motorcycle company, today announced its FTR 1200 Artist Series, a collaboration with five renowned artists on a limited-edition line of tank covers for its all-new FTR 1200. Only 100 tank covers of each design will be produced, with the five unique designs to be unveiled on June 13, at Wheels & Waves in Biarritz, France. Sets will be available from select Indian Motorcycle dealers for $699.

Indian Motorcycle curated a lineup of artists with extremely distinct styles from street graffiti to modern abstract, in order to appeal to a wider range of consumer preferences. The artistic tank covers will allow FTR 1200 owners to instantly transform their bike into a piece of mobile fine art, while also increasing their personal connection to the FTR 1200.

The five artists include:

The FTR 1200 stands as Indian Motorcycle’s most-customizable platform to date, featuring four distinct accessory collections, designed to modify the bike’s overall look and feel based on the unique tastes and styles of different riders. With its fuel tank located beneath the seat, the FTR 1200 airbox sits directly over the motor where fuel tanks more commonly reside. This allows for tank covers that are easy to remove and interchange, making the process of customization and personalization even more efficient for riders.

“Art and motorcycles share a common thread of self-expression, and for motorcycles, customization is where self-expression truly comes to life,” said Reid Wilson, senior director of marketing and product for Indian Motorcycle. “The FTR 1200 and its diverse accessory collections, were purposefully designed to enable a rider’s desire for self-expression, and the Artist Series serves that same purpose in a highly artistic fashion.”

An episodic content series, Wheels & Waves, will showcase each of the five artists, their design process, and their unique airbox cover designs.