Last month we mentioned the impact of the negative economic news on the powersports market. This month brings more of the same. 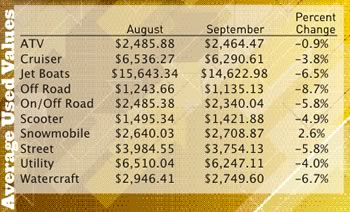 Last month we mentioned the impact of the negative economic news on the powersports market. This month brings more of the same. While Congress has finally resolved the debt limit increase issue, general economic conditions remain challenging, especially among the general public with the current conditions and the lack of consumer confidence.

With bad economic news continuing to arrive on almost all fronts, consumers are holding off on big-ticket recreational purchases more often than not. A large percentage of powersports market spending can be considered discretionary. This has had a corresponding negative impact on prices once again this month.

All segments, with the exception of snowmobiles, are down by significant amounts this month. I was recently in Traverse City, Mich., and even though the PWCs were active on the lakes, I was pleasantly surprised at the number of snowmobiles sitting in the side yards waiting for the season to change. They will soon be getting a fresh tune-up and will be ready for the first big snow.

PWCs and jet boats, which are expected to decline in value at this time of year, are down an unusually large 6.7 percent and 6.5 percent respectively. Street bikes are down 5.8 percent, while scooters are down 4.9 percent. Off-road bikes have dropped a surprising 8.7 percent, while the on/off road segment is down a little less at 5.8 percent. Cruisers are only down an average of 3.8 percent percent. It should be noted that following last month’s declines in values, these are much larger drops than would normally be expected for the fall. The only bright spot is in the ATV segment, where prices have declined by a very modest .9 percent. But even this is unusual as ATVs normally increase in value at this time of year.

Another note of interest continues to be fewer repossessed bikes and utility units available at the auctions. This is a good sign for the lenders, but more of a challenge for the dealers who need additional inventory. The export market continues to be the driver of auction activity. For the off-road purchase, the trade-in values as listed in our guides and data, should be considered for those purchases, not the Auction Wholesale column of listed values.