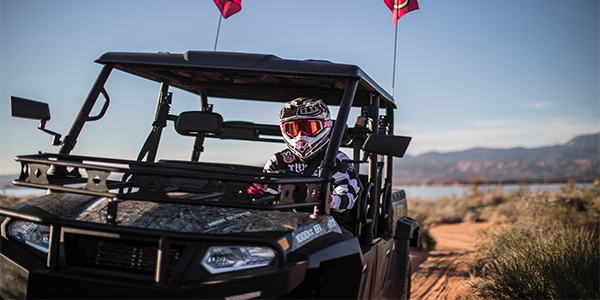 In 2008, the number of UTVs sold in the U.S. was around 270,000 units before the financial crisis took hold. In 2016, that number had grown to just under 411,000! Although, UTV sales numbers are speculative because they are not reported to the MIC like motorcycles and ATVs are. But if our estimation is close, we are talking some serious dollars considering what the average priced UTV costs.

While the ATV market is still respectable, more and more consumers are purchasing side-by-sides over quads. Some industry experts believe the industry is mostly dependent on the strength of SxS sales, whether in pre-owned or new. National Powersport Auctions COO Jim Woodruff told MPN last year that SxS sales are up over 300% since 2006 compared to ATV sales, which were down by a third. Woodruff noted that there were ~40% more ATV/UTV used units sold in 2016 than back in 2006, which he surmises is due to SxS pre-owned sales being up by more than 18x than it was in 2006.

In Editor-at-Large Robin Hartfiel’s October 2017 article, RUVs Rocking! ATVs Rolling! he noted the ratio of pre-owned to new registrations is about 2:1 for the overall powersports market. For the ATV/UTV segment, the ratio is 0.7:1 (and <1:1 the last decade), and 0.35:1 for UTV alone (stable the last 6 years as the market matured).

NPA’s Woodruff said these numbers imply that overall ownership of ATVs and UTVs continues to grow, with demand being satisfied by both new and used units. The used/new ratio may also be <1:1 due to off-road owners being more likely to retain their used units when they buy a new one.

For 2018, the momentum in the market doesn’t appear to be slowing for some UTV manufacturers. “We have seen a great start to 2018 thus far, and we are anticipating the biggest first quarter in company history,” said Ryan Daugherty, HISUN Motors Vice President of Marketing and Sales. “Going into this year, we really set our focus on growing relationships with our dealer network and enhancing the user experience through customer service and online touch points.” 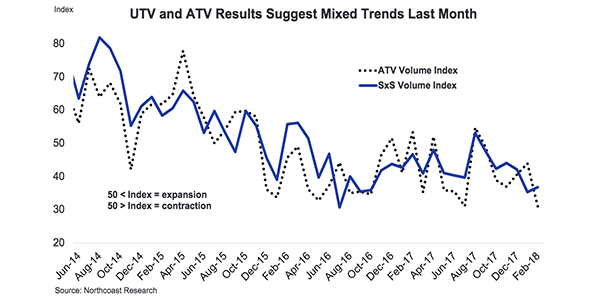 According to MPN contributor Seth Woolf of Northcoast Research, in his latest Market Intelligence Report, a recent survey of powersports dealers indicates that the off-road vehicle market saw weakness in the UTV and ATV segment in January. Some dealers have complained that they had low Recreational/Sport SxS inventory in the early part of the year and that had weighed on sales.

Woolf said that dealers were excited about the effects the new tax bill may have on their customers’ buying behavior. In fact, Woolf noted that optimism among dealers about future retail sales is stronger than it has been in months – which is undoubtedly a good sign.