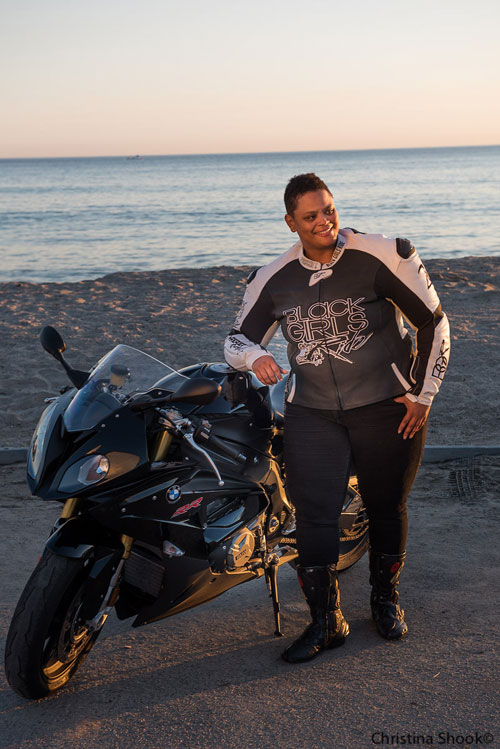 Porsche Taylor, founder and editor of Black Girls Ride Magazine, epitomizes the urban rider. Her definition of good urban riding gear, like mine, is motorcycle apparel that is at once protective while it can easily be worn in other settings as she moves about her daily life.

[dropcap]M[/dropcap]y ‘women and motorcycles’ Google Alerts exploded recently with the “news” of Lady Gaga riding to dinner in Santa Monica on a motorcycle with Bradley Cooper. Quintessential urban riding, to the non-riding motorcycle public it probably seemed a bit exotic, adventurous and romantic. For us motorcyclists who live in the cities (myself in the LA metro area) we often think of it as self-defense against brain-numbing traffic.

Porsche Taylor, founder and editor of Black Girls Ride Magazine, epitomizes the urban rider. Living in Los Angeles and riding a BMW S1000RRR, her daily riding, like mine, is not only doing errands, but often riding to business appointments, often in stop-and-go traffic. Her definition of good urban riding gear, like mine, is motorcycle apparel that is at once protective while it can easily be worn in other settings as she moves about her daily life in the city.

There’s a fine line in finding brands that are fashion-forward but technically functional. “Riding in traffic, splitting lanes in California, you need to have apparel that is light and comfortable. You don’t want anything that’s too constricting simply because there is so much stopping and starting when you ride. You want something that feels like it’s light and it’s there and it will protect you, but it doesn’t have to be super MotoGP technical,” says Taylor.

Extremely popular now are the riding flannels; they look like a lumberjack shirt but are usually made from abrasion-resistant materials and have pockets for optional armor. Examples for men are Speed and Strength’s Black 9 Moto and Scorpion’s Covert Flannel Shirt. Paired with the nearly ubiquitous popular riding jeans, such as those made by BMW, REV’IT!,

Dainese, Alpinestars, Cortech, Rokker and even Klim, form meets function and motorcyclists can feel protected while being dressed for everyday off-the-bike activities.

I’m not a hoodie person, but they deserve honorable mention here, taking urban riders into new fashion horizons by offering built-in protection that’s hardly noticeable off-bike. Fly, Bilt, Speed and Strength, Spidi and Xelement are all offering riding hoodies with armor. Women aren’t left out when it comes to hoodies, either, with offerings from GoGo Gear and Harley-Davidson, as well as offerings from many of the already mentioned manufacturers.

We all know that women come in a heck of a lot more shapes and sizes than men, and for urban apparel fitting curvy female riders like herself, Taylor is a fan of the PowerTrip line by Joe Rocket. Their Diva sizing is more generous than their other lines, and takes into account the plus sizes women riders can be. “They fit really well. They also offer certain buckles and cinches that will accentuate a woman’s curves, which a lot of women gravitate toward. We don’t want to look like a guy on a bike,” says Taylor.

I happen to agree. After all, the woman in me wants to look my best on a bike, in case I run into one of those Hollywood types!