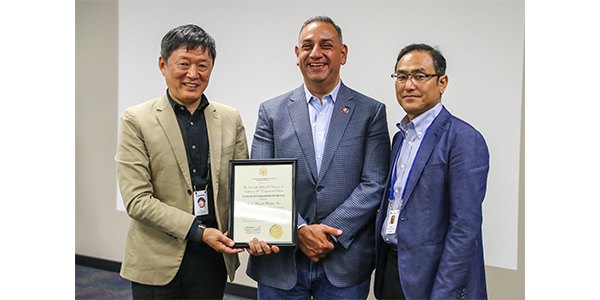 “Companies like Suzuki Motor of America Inc. are the engines of growth and socioeconomic advancement in our district. It was wonderful meeting with Suzuki America’s leadership and the many employees who are 39th District residents,” said Rep. Cisneros. “The 39th District’s highways of commerce and highly skilled workforce make it an ideal place for companies like Suzuki to grow their business while investing in their employees. I’m proud that Suzuki America chose to be headquartered in Brea, in the heart of the 39th, and is a key part of our local economy.”

During their visit, Congressman Cisneros met with Suzuki’s senior executive staff to discuss topics of importance to the powersports industry. Among other things, the group discussed the ongoing international trade dispute, land access issues and ensuring California remains business-friendly. Kerry Graeber, vice president of motorcycle/ATV sales and marketing encouraged Congressman Cisneros to join the Congressional Motorcycle Caucus to broaden his awareness and influence on matters that surround motorcycles.

“It was a pleasure to meet with Congressman Cisneros,” stated Graeber.  “He was genuinely interested in our industry and we sincerely appreciated the opportunity to sit with him and explain Suzuki’s business.”

Though Congressman Cisneros is not currently a motorcyclist, Graeber joked that he would be happy to teach both Cisneros and his wife how to ride a motorcycle.

At the conclusion of the visit, Suzuki employees came together for an informal reception where they had the opportunity to meet Congressman Cisneros, Medrano and Wade, and enjoy snacks and drinks. Suzuki continues to demonstrate its commitment to powersports by connecting with those representing its community and industry.