All gave some, some gave all.” That’s the theme of the tribute rock crawler created by XY Powersports to honor United States Army Staff Sergeant Keith “Matt” Maupin and American military personnel.

“This machine is an ideal way to pay tribute to our military men and women and to honor the memory of Matt Maupin,” says XY Powersports President Steve Claybourn. Claybourn, a Vietnam veteran, was inspired to design this vehicle after discussions with Keith Maupin, Matt’s father. 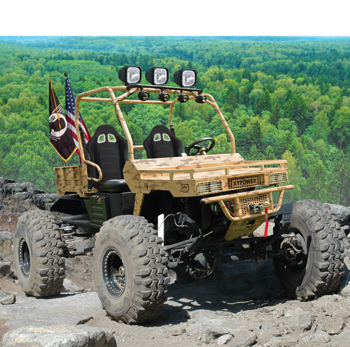 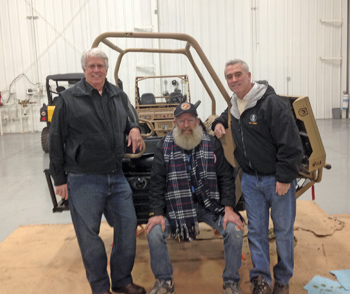 XY plans to showcase this tribute vehicle at various races and UTV industry events in 2014 in order to raise awareness and funds for the nonprofit Yellow Ribbon Support Center, based in Greater Cincinnati.

Matt’s parents founded the Yellow Ribbon Support Center after their son was captured by Iraqi insurgents on April 9, 2004. The center sent care packages, covered with Matt’s photo, to U.S. soldiers in Iraq to raise awareness about Matt and possibly lead to information on his whereabouts.

While focused on Matt, the center realized that U.S. soldiers had basic needs that weren’t being met. The Yellow Ribbon Support Center soon sent care packages to any soldier’s unit whose family supplied an address.

In addition to the Yellow Ribbon Support Center program is the Let Us Never Forget Scholarship Fund, which provides post-secondary education scholarships in the name of fallen military personnel from the Greater Cincinnati area.

Started in 2006, this program has awarded more than $450,000 in scholarships to high school seniors, ensuring that fallen soldiers are remembered and their legacies honored.

“This rock crawler brings a lot of attention to our military personnel and the great work of the Yellow Ribbon Support Center,” Claybourn says. “XY is proud to share this vehicle with racing and UTV fans, and we hope this tribute vehicle supports the efforts of Yellow Ribbon and honors U.S. soldiers.”

For more information about the rock crawler, call: 888-926-8997. For more about the Yellow Ribbon Support Center and Let Us Never Forget Scholarship Fund, call: 513-752-4310 or visit the website at: www.yellowribbonsupport.com.