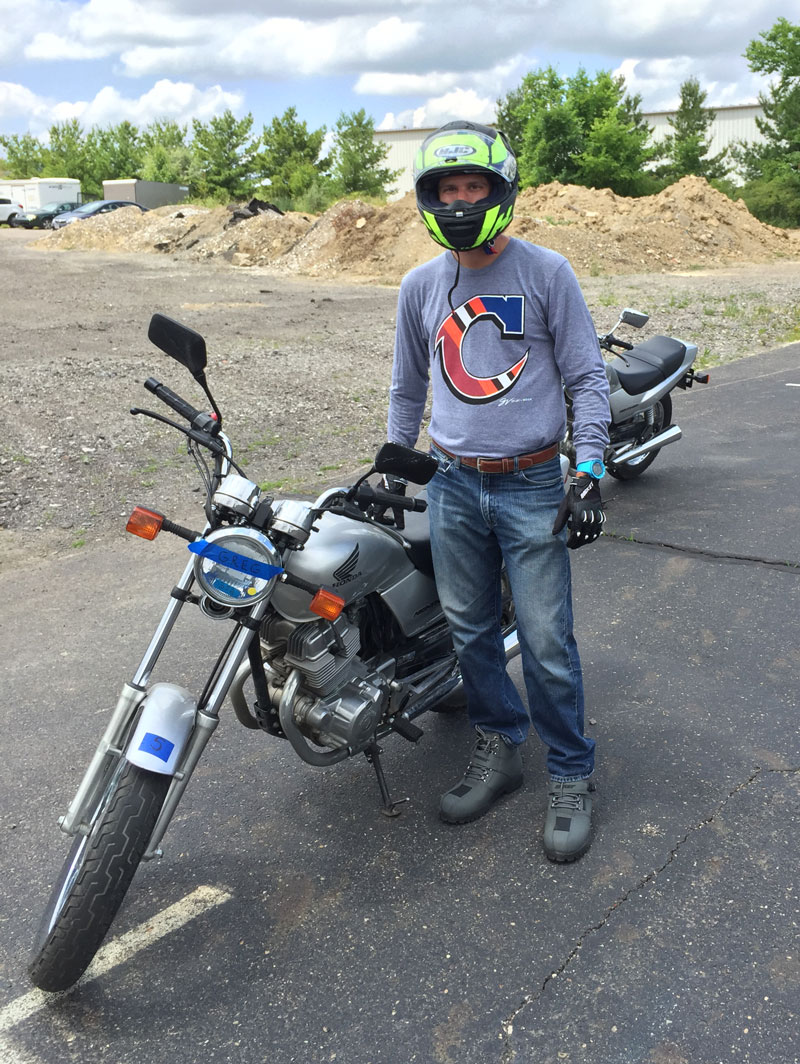 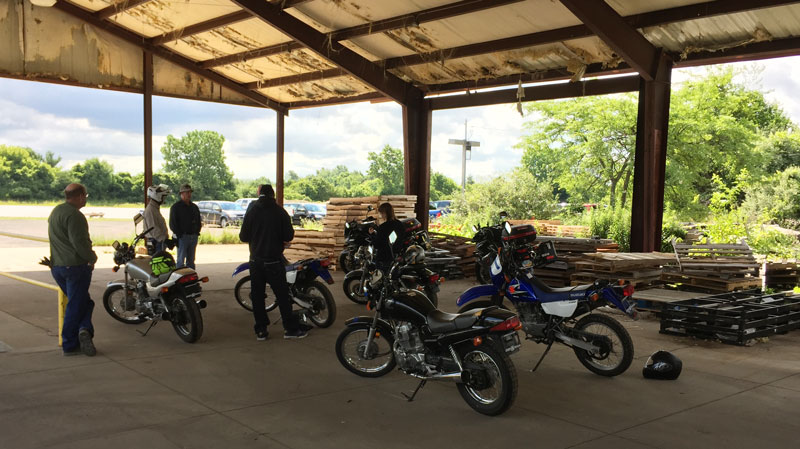 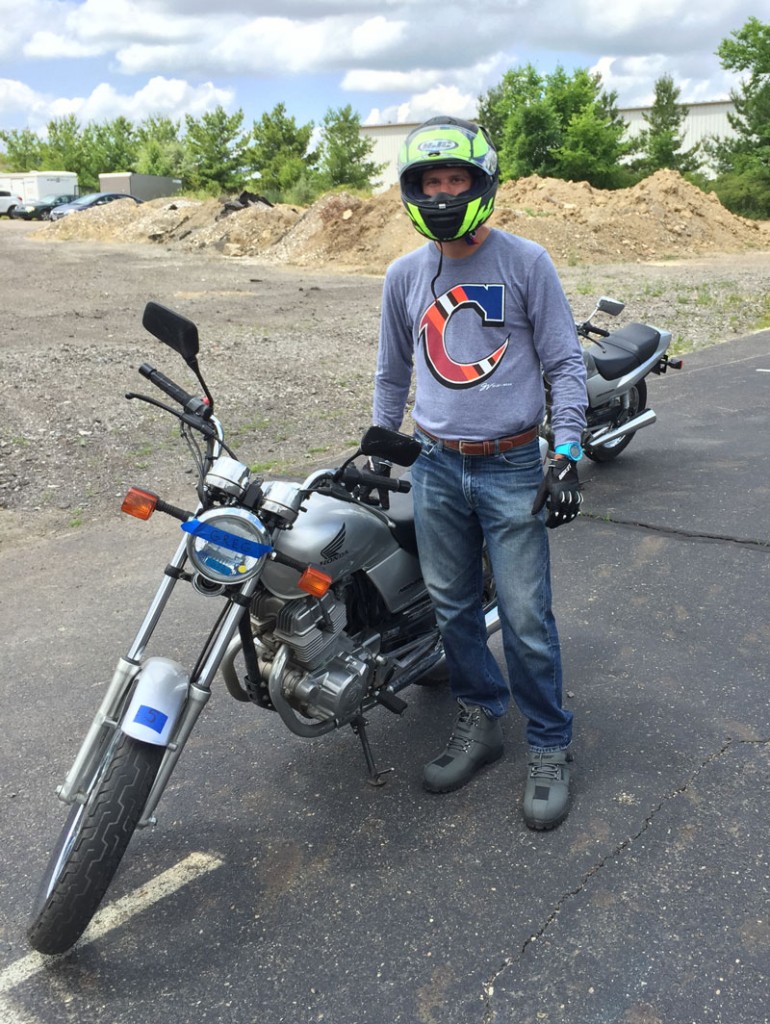 Greg and his Honda Knighthawk for the weekend. Big thanks to HJC, Joe Rocket and Rockwell Watches for the riding gear.

[dropcap]I[/dropcap]’ll be the first to admit that while I’ve been MPN’s managing editor for nearly three years now, I have never ridden a motorcycle. Aside from putting a leg over a bike at tradeshows, I have only ever admired the machines and written about the many makes and models available.

Knowing how to ride a motorcycle was never, and still isn’t a requirement of this job, but it helps, and my admiration for motorcycles and my desire to learn how ride has been growing every year.

To finally quench my thirst for learning this skill and to fully enjoy what this industry offers, a fellow MPN colleague and I signed up for a Basic RiderCourse. We had a few contacts at State 8 Motorcycles, a local dealership that offers Honda, Kawasaki, Suzuki and Yamaha, as well as rider education classes such as an Intro Motorcycle

Outdoor range exercises include starting, stopping, turning and hazard avoidance, using training motorcycles that are 250cc or smaller. The total instruction time was 16 hours, including a skill evaluation at the end of the course. Students who passed the skill evaluation received a completion card, waiving the on-cycle skill test required by the state of Ohio for a motorcycle endorsement.

Before we even qualified to take the course, we needed to pass Ohio’s written motorcycle exam to earn our temporary license. Fortunately, both David and I passed without any issue. Next, we needed some gear in order to be properly protected as mandated by State 8. All students needed a DOT-approved helmet (loaners available), eye protection (glasses or face shield), full-fingered gloves, long-sleeve shirt or jacket, over-the-ankle boots (with low heels), and long pants (jeans with no holes or tears, sturdy material recommended).

Having never ridden a motorcycle before, I didn’t own any gear, so I went looking to change that. Luckily, MPN has some great partners to turn to and I got set up with an HJC RPHA ST Knuckle (MC-4HF) full-face helmet, Joe Rocket Atomic 5.0 textile jacket, Joe Rocket Cyntek gloves, Joe Rocket Big Bang 2.0 boots, and even a Rockwell Rider watch from MTA Distributing. David borrowed a helmet and bought a pair of gloves from State 8, but got hooked up with a Joe Rocket Alter Ego 3.0 textile/mesh jacket. 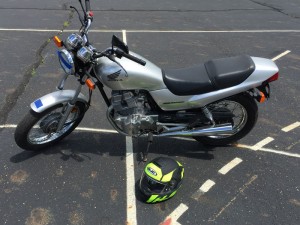 But enough with the logistics, let’s ride, right? The Basic RiderCourse was both Saturday and Sunday, 7:30 a.m. to 4:30 p.m. each day. Ten of us arrived bright and early and were greeted by Tim Coyne, a retired Cleveland motorcycle policeman, and Dick Swartz, an accountant by day with a rich background in motorcycle riding. The two instructors partnered together to teach a RiderCourse back in 2004 and have been teaching these classes together ever since.

We started Saturday morning with a few hours of classroom lessons from the Rider Handbook donated to State 8 by the Motorcycle Safety Foundation (MSF). As mentioned earlier, we covered the basics – controls, operation, riding prep, risk awareness, and street strategies.

Now it was time to get on the bikes. Set up at the back of the dealership was the riding range and a selection of 12 motorcycles for us to choose from (Honda Knighthawks and some Suzuki DR 200 Dual Sports). I immediately gravitated toward a silver Honda Nighthawk. David, being a dirtbike rider already, chose a Suzuki. 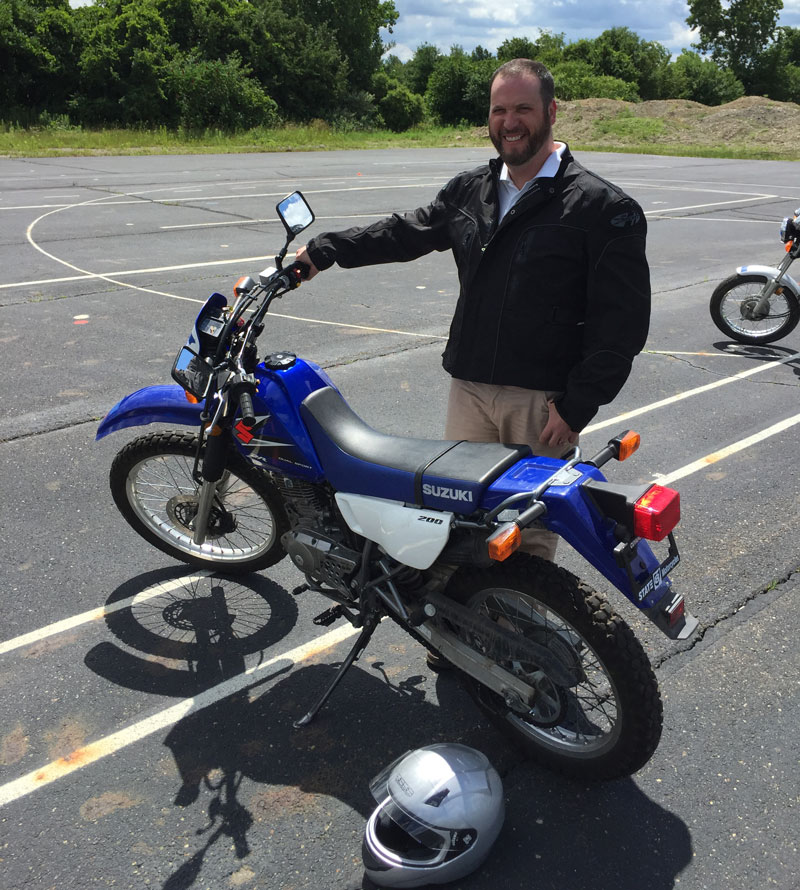 We geared up and were walked through the engine pre-start routine called FINE-C – Fuel, Ignition, Neutral, Engine Cut-Off Switch, Choke/Clutch. We then got to mount the motorcycles.

I swung my leg over the Honda, rocked the motorcycle upright and straightened the handlebars. The fuel sloshed, I put the kickstand up and I went through FINE-C – I was already hooked and the engine hadn’t even turned over yet!

We proceeded to go over some turning and leaning techniques as well as shifting in and out of neutral while stationary before we walked our motorcycles to the riding range. Once we were all down at the range we got to start our bikes, but we had to get a feel for balancing before we truly got to ride.

After a couple drills where we walked back and forth across the range while straddling the bikes, we got to shift into first and actually ride using the clutch friction zone. Who knew 3 mph could be so fun!

Over the course of the next six hours we learned how to effectively use that clutch friction zone, as well as shifting, braking, turning, proper leaning and the ever crucial, looking where we want the motorcycle to go.

Tim and Dick set up the range in countless different configurations using cones to mark turns, stopping areas and paths for us to ride through to teach us different skills we’d need to learn to ride properly.

After day one was in the books, most of us were feeling pretty comfortable on our bikes and with the basic skills we had just learned. We returned Sunday morning again bright and early to get right back on the motorcycles and finish learning basic skills and running drills we would circle back to during our riding assessment later that day.

During day two, we practiced drills shifting up to second and third gear and back down to first as we came to a stop. We rode curve drills, emergency stopping drills, swerving drills, lane changes and box drills using our clutch friction zone. We even went through some drills where we used all of these skills combined. I wasn’t perfect, but I was performing fairly well and had a good understanding of all the things I needed to do. I felt I was ready for the riding assessment.

Towards the middle of the day Sunday we had run through all we would learn in the Basic RiderCourse, and it was time to do the riding assessment. We lined up alphabetically and would ride the different drills one at a time. We were allowed a 20-point deduction before we would fail and have to retest. I was in the middle of the pack, but David, with his last name beginning with B, was the lead off man. 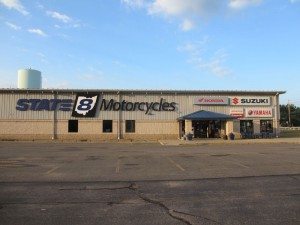 We had to start by using our clutch friction zone in first gear and ride the box drill navigating a full left turn and a full right turn without going outside the box lines or putting our foot down, and then straighten out accelerating to second gear and maneuver the swerve drill to the right without hitting any cones, straighten out again to brake and downshift into first before coming to a complete stop.

If you did it well enough, you moved on to the next drill. If not, this was a section you could try twice.

David was first up, and he navigated the box drill and the swerve pretty solidly and Tim and Dick agreed. He moved on to the next drill’s starting point to wait for the rest of us to finish the first drill.

It came time for my turn on the box drill, which I had been nailing in the practice runs, and I started out great, but had to put my foot down for a split second on my right hand turn before I straightened out and rode the swerve drill just fine. Even with the foot foul, I only got a minor deduction and the rest was good, so Tim and Dick gave me the thumbs up and I headed for the next drill.

In total, only a couple riders had to try the first drill more than once for either not going fast enough or for going outside the lines or cones. The second drill was the emergency stop or quick stop. 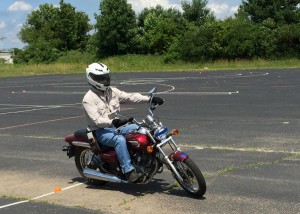 Dick Swartz doing a riding demonstration for the class.

For this drill we had to accelerate into second gear going straight and once we reached a set of cones at the other side of the range, brake to a stop as quickly as possible and downshift into first gear simultaneously without skidding the tires.

You lost points if you didn’t go fast enough or anticipated the stop whatsoever, because the idea of this drill was that something unexpectedly happened in front of you, and you had to
stop quickly.

David again went first and seemed to do a fine job making a quick stop. I felt comfortable with this one as well and got through it with no issues. Scoring-wise, this drill was a critical one. You were measured on whether or not you covered your brake and clutch as you approached the stop zone, (you weren’t supposed to) if you kept your head straight and looking forward, how far it took you to stop the bike and so on.

There was a good amount you could do right or wrong, but most of the class did well. 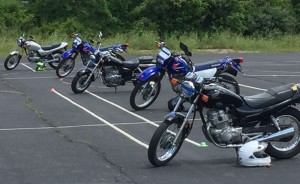 On the third and final drill, which was navigating a curve, we had to start at one corner of the range and shift into second gear as we sped up to around 18 mph approaching the curve. The start of the curve was marked with cones and we had to brake enough before the curve so that we could apply the throttle throughout the turn.

We also had to make sure we looked ahead to where we wanted the bike to go and stayed within the lines. After making the turn we had to downshift to first and come to a stop at the ending cones. 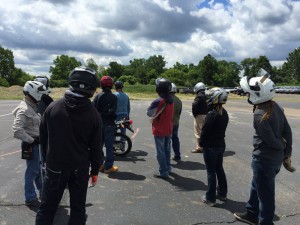 Tim and Dick explain a riding drill to the class of 10.

After the riding assessment was all said and done, the entire class passed. We did some final classroom housekeeping and were given our endorsements to get our motorcycle licenses. With David and I now able to ride a motorcycle and Brendan and Robin already motorcycle riders, the MPN team is primed to test ride some motorcycles!