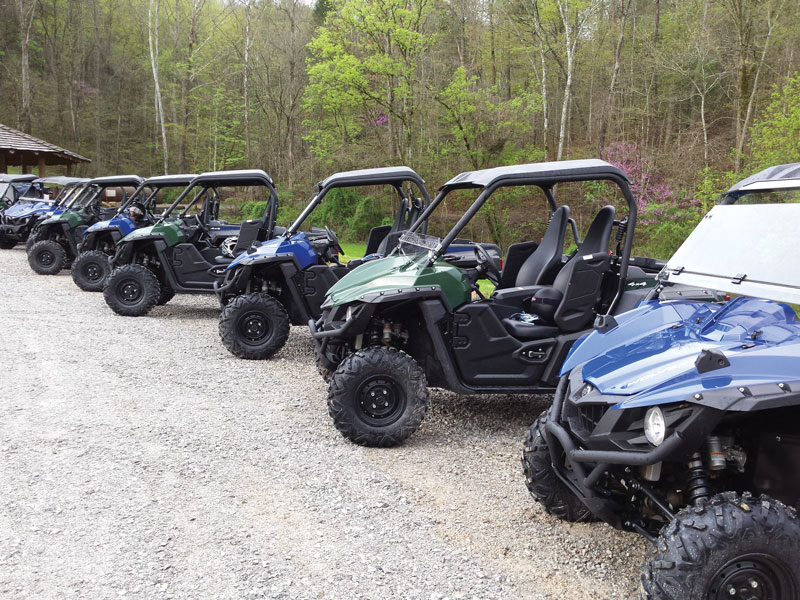 We Put Yamaha’s Wolverine R-Spec Through Its Paces

This was the first chance for anyone outside of Yamaha to drive one of these much anticipated recreational UTVs.

[dropcap]L[/dropcap]ast month, Yamaha hosted a Wolverine R-Spec press ride for invited media at the Disneyland of OHV riding trails – Brimstone Recreation area in Huntsville, Tenn. It was an easy testing facility choice as Brimstone manages more than 19,000 acres of OHV trails. This was also the first chance for anyone outside of Yamaha to drive one of these much anticipated recreational UTVs. We’ve read and studied all of the features and specs of the new machine since it was first unveiled in March, and it was time to put it to the test in the real world with a group of riders who were most likely to destroy one!

The R-Spec features the highest ground clearance in its class with KYB gas-charged piggyback shocks, which are really in a class by itself (but more on that in a bit). It also features a new, more powerful DOHC 708cc EFI engine, full-length and width bellypan and On-Command four-wheel-drive system allowing riders to choose between 2-wheel drive, 4-wheel limited slip, or 4-wheel full differential lock, which enabled us to claw our way through the mud, boulders and steep uphills of Brimstone.

Yamaha has positioned the Wolverine as a recreational UTV that can do work as well as play. What that essentially means is that it will fit the needs of riders who like to ride aggressively (trail riders) but also those who like comfort and to stroll along to their destination (outdoorsmen). We did a little of both, and despite a small hiccup with the diff-lock, which was more than likely driver error, the R-Spec seemed invincible on the trails. Could we find a trail that was too much for it? Even the sections that would normally make you cringe going over them, the huge travel soaked up the bumps effortlessly. 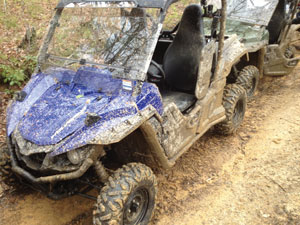 The Wolverine R-Spec’s On-Command 4wd system got a workout at Brimstone as did the rider.

As we rode with a number of outdoors journalists who had very little experience with trail riding, it was impressive how easy and comfortable the R-Spec was for everyone to drive. Maybe it was the Electric Power Steering (EPS) system that was more like power assist than all out power steering that made it so easy? Although, it is really the combination of all the features that will make SxS customers love this machine. The suspension seemed to have endless travel, and on the occasion when we did encounter a large boulder or log that bottom out the chassis, it never hit hard or felt as jarring as one would expect. The bellypan also absorbed a lot of the harshness, especially when climbing the deeply rutted hills that were axle deep and all we could do was turn on the diff-lock and punch it.

The same trails would be great fun on an ATV, but a far different experience, and frankly much more of a workout than we were prepared for. While the EPS was light and gave us great feel, one thing we don’t think will be light for the Wolverine is sales. The Wolverine R-Spec is just now being shipped to dealers as we go to press, and we’ve heard there is great response to it so far.