Just about every dealer has a Facebook business page, but I rarely see dealers offer Twitter as a social media channel. If you have Facebook, you might as well work both popular channels to expand your social media reach.

Just about every dealer has a Facebook business page, but I rarely see dealers offer Twitter as a social media channel. If you have Facebook, you might as well work both popular channels to expand your social media reach. We recently offered to set up our clients with Twitter for free and got zero responses. None. 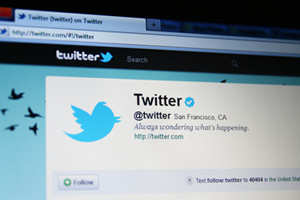 When I talk about Twitter to my clients, they usually say that they don’t use or “get” Twitter. The goal of this article is to motivate you to get on board with Twitter today! Many other powersports dealers have Twitter set up as a channel, so why not you? You don’t have to get it; you just need to do it. The bottom line is the more social media channels available for communication the better.

Here’s the reality — over the past five years, Twitter has grown to garner:

That is a lot of people in a short space of time that have been convinced by Twitter power. There is a huge audience out there just waiting for you (and I can tell you many powersports dealers are already tweeting regularly).

I, too, wonder what people are doing with their time, but it is absolutely to your advantage that people are so addicted to social media.
Next, let’s look at the Twitter demographics which are an ideal fit for powersports:

Hopefully, those powerful numbers have convinced you it’s time to tweet. But what’s your strategy? Twitter can help you:

• Interact and support your customer base
• Monitor what people are saying about your dealership
• Create buzz around upcoming promotions and events
• Generate leads. Yes, it’s trackable to prove ROI

I believe many dealers avoid Twitter because the lingo is really confusing; but once you understand it, it really is simple, so don’t be intimidated by this new technology. Here’s what you need to know.

The “#” symbol, called a hashtag on Twitter, is used to mark keywords or topics in a Tweet. For example: #powersports is a hashtag that will show all tweets from people discussing related topics for powersports. Here’s an example: “Visit us to test ride an ATV! #powersports.”

Retweet Topics of Interest! Many times you will come across a Tweet that you want to share with others. Twitter’s Retweet feature is similar to “forwarding” in email, allowing you to quickly share that Tweet. Just click “Retweet” to start sharing.
Use the @reply. People say lots of things on Twitter, and sometimes you want to say something back: this is what the “reply” feature is for on Twitter. Any Tweet that is a reply to you will show up in your @Mentions tab on your homepage. Simply click the “Reply” link under a tweet, or type an “@” before someone’s Twitter handle to get started.

Once you master the basics, you are sure to love Twitter so much you’ll be ready for TweetDeck. TweetDeck, available as a desktop or mobile app, allows you to watch the stream of tweets from the people you are following, which keeps you in the loop on what is happening in the powersports world. Using TweetDeck is a great way to watch multiple keywords on one screen. TweetDeck is best understood by viewing it for yourself: go to www.tweetdeck.com.

Social Media is already part of your business marketing plan with the use of Facebook, so think of Twitter as the next necessary step. Many customers will follow you if put a Twitter icon on your website, and you don’t have to invest a great deal of time managing it.
Your daily approach should be to Tweet on relevant and interesting topics that you know your followers will enjoy — using the same best practices as Facebook. In the end, your followers will grow and so will your business. Don’t over think it, just do it.

Need help getting set up on Twitter? For the month of October only, we will help any powersports dealer set up their Twitter account. Why are we doing this? Because we believe in Twitter, and we know you guys need a push. Contact me, and you’ll be tweeting away in no time.

Peggy Olson is the founder of Duo Web solutions, a company specializing in online marketing, social media and online reputation services for powersports dealers. Peggy can be reached at [email protected].