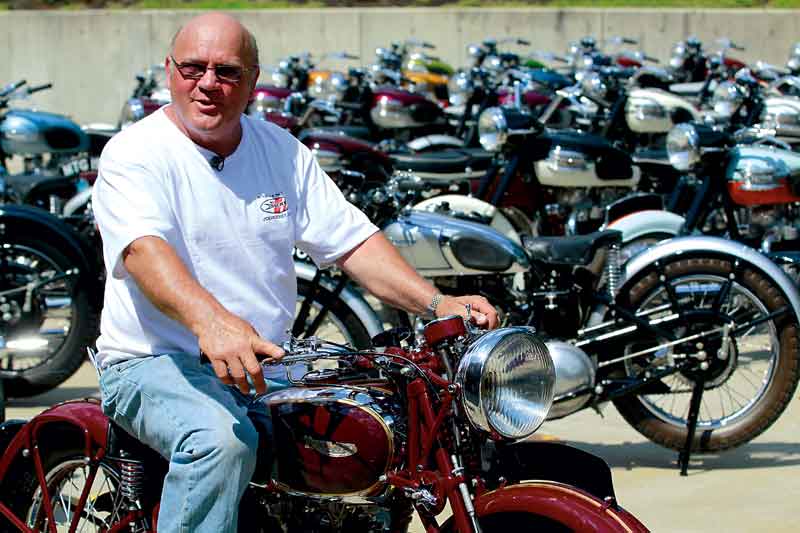 If you know Bobby Sullivan or have ever seen his Triumph collection at the Sullivans Inc. headquarters just outside of Boston, you know he is one of the biggest Triumph enthusiasts out there.

If you know Bobby Sullivan or have ever seen his Triumph collection at the Sullivans Inc. headquarters just outside of Boston, you know he is one of the biggest Triumph enthusiasts out there. His love for Triumph motorcycles stems from his early racing days at dirt track and flat track events.

Bobby started Sullivans by noticing a need for air filters for those Triumphs and sourcing the parts. It didn’t take long before friends and competitors were asking Bobby to get them parts, and Sullivans Inc. was born.

Founded in 1972, Sullivans somewhere along the line transitioned from air filters into the on-body product distributor it has become today.

“The company has grown throughout the years and taken a few different paths,” says Brandon McDowell, national sales manager for Sullivans. “What has happened is Sullivans really focused in on a niche. Our success became evident when maintaining our focus around on-body products such as helmets, jackets, gloves and other soft goods.” 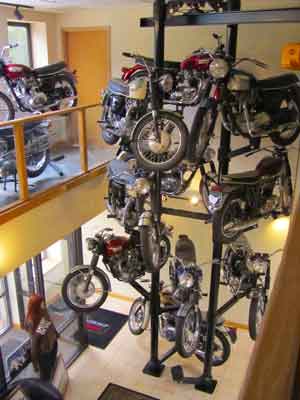 Bobby Sullivan is one of the biggest Triumph fans you’ll ever meet. In the Hanson, MA warehouse he has a classic Triumph refurbishing garage. Bobby has more than 100 bikes in there. This is his “Triumph Tree.”

Sullivans’ earlier years as a helmet distributor led the company to pick up HJC Helmets, one of Sullivans best brands, and to this day, the only helmet brand it carries.

“One of the biggest things that ever happened to Sullivans was back in 1985 when it picked up the HJC line and they’ve had it ever since,” says Steve Blakeney, marketing director, Joe Rocket.

Sullivans’ move to carry HJC Helmets has been a key part of the business, and HJC has been the number one global brand of helmets since 2005.

“Helmets are a key part of our business and the only helmets that we sell are HJC helmets,” McDowell says.

“We have had a number of opportunities to pick up other helmet lines, but that would pull focus away from what has brought us here.”

Bobby and the owners of the two other distributors for HJC are in many ways the founders of HJC here in the U.S.

“HJC came over to the U.S. as a domestic Korean brand and built up its line in collaboration with its distributors,” Blakeney says. “HJC’s product development is a direct result of what our road reps are hearing from the retailers who are hearing from the consumers and we start developing our models to reflect that. The retailers tell us what consumers are looking for and we tell HJC and they get it done.”

Sullivans started distributing HJC in 1985. The helmet company has been a No. 1 brand for years.

Aside from HJC, Sullivans’ ace in the hole is the Joe Rocket brand. Joe Rocket has led Sullivans to completely new heights of success over the years. Sullivans for the longest time was purely a distributor, but Joe Rocket changed all of that.

“In 1992 Joe Rocket was born,” McDowell says. “At that time it was distributed by a couple different distributors, but ultimately Sullivans purchased Joe Rocket in 2009 for the United States. Sullivans became not only the distributor for the brand, but the manufacturer, which was a pretty big change.”

One of the main reasons for that move was to cut out the middleman. The overseas manufacturer, Joe Rocket ownership in the U.S., Sullivans, and the retailer each took a cut before product worked its way over to the consumer.

“We lopped off an entire section of that so it goes straight from manufacturer to Sullivans to the retailer, and that’s a significant percentage,” Blakeney says. “It has allowed us to keep our prices for a lot of our staple models – Atomic and Phoenix jackets – at relatively the same price for the last decade, which is unheard of in any industry. That was one of the key decisions and it’s worked out quite well.”

Today, Sullivans has become even more streamlined due to direct contact with its manufacturing and in-house designers.

“It cuts out a lot of fat,” he says. “If we need a new Atomic jacket we just start doing it. We don’t have to discuss it and ask the Joe Rocket people to stop designing other things to get back to this core piece. We don’t have to convince anybody of anything, we just do what we need.”

As a result, the Joe Rocket product line has gone more to a core line of products such as the Atomic, Phoenix and Velocity jackets.

Today, Sullivans has two other warehouses besides the Hanson, Mass. facility – one in Reno, Nev. and the other in Alabama. That growth coincided with that of the Joe Rocket and HJC brands, as well as other related brands the company brought into the portfolio.

Being able to produce these products for any rider regardless of what they ride is the trick. Sullivans places emphasis on product features and pricing, which is also reflected in its marketing.

“Joe Rocket advertising uses a lifestyle shot because it’s better to have the product on a person rather than just static,” Blakeney says. “The ad is also dominated by the features list and the price because that’s what the person is ultimately buying.”

Customers today are faced with so many different apparel options that it is crucial that these consumers can separate your products from others.

“We try to be the experts when it comes to those products,” McDowell says. “That’s why you have to differentiate yourself.”

One of the things that sets Sullivans apart from others in the industry is how it does business, and that starts with its people and its pedigree.

“Bobby Sullivan is in the office every single day,” McDowell says. “He’s on the phone with dealers and reps, he’s in the back packing boxes and he is well attuned to what’s going on in the company, and that is another attribute to our success – having leadership close to the pulse of the business and industry.”

That attitude trickles down to everyone at Sullivans. The company is made up of a real tight-knit group of people who live, eat, sleep and breathe powersports, and the company treats its dealers the same way.

“Trying to be the experts in this field is what we strive for,” McDowell notes. “We’re constantly going through training on our new products coming up, but keeping an eye on the competition and other industries to discover where the next deciding point is going to be and making sure that we’re ahead of the curve.”

The marketplace is ever-changing and the industry has been through some tough times, but it’s a testament that Sullivans is still here and staying focused on the on-body goods.

“I don’t see us deviating away from that,” McDowell concludes.

Sullivans Inc.: A Backbone of Brands