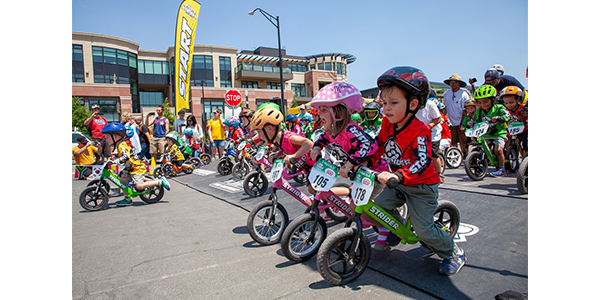 Strider Cup races are held across the globe, with over 30 races taking place in 2018 in countries such as Japan, the United Kingdom, China, Russia and Ecuador.

As the dust settles from the past Strider Cup race season, Strider Bikes has announced the U.S. cities hosting the 2019 Strider Cup races for children six years old and younger on Strider Balance Bikes. Strider has added Los Angeles and Minneapolis, in addition to returning to Boulder, Colorado and Charlotte, North Carolina.

One race venue that stands out is the Los Angeles race, being held at LA Live in the shadow of the Staples Center. LA Live has served home to the Lakers, Clippers, Kings, the ESPY’s, Grammys, Emmys, American Music Awards and now toddler, two-wheeling tornadoes.

Strider Cup races are held across the globe, with over 30 races taking place in 2018 in countries such as Japan, the United Kingdom, China, Russia and Ecuador. The Strider Cup series is powered by the groundbreaking design of Strider Bikes, which empowers toddlers and young children to safely enjoy the mobility and independence of two-wheel biking at an earlier age than any prior generation.

While each Strider Cup race fosters camaraderie and supports a community of passionate, outdoor-loving families, the Oct. 5, race at the NASCAR Hall of Fame stands apart from other races as it is the Strider Cup World Championship. This event attracts families from around the world to ride, play and celebrate the freedom and adventure of riding on two wheels. The 2018 Strider Cup World Championship held in Boulder welcomed hundreds of attendees from 14 countries and 26 states.

Dubbed by many as the “cutest race in the world,” the Strider Cup series offers Strider riders ages six and under a chance to put their balance bike skills to the test in a friendly, encouraging environment.
A typical race scene involves toddlers, some only 16 months of age, kicking their legs to propel their bikes along a 650-foot plus journey over ramps, around obstacles and through tunnels.

Racers delight in a podium ceremony afterward, where the fastest tykes earn trophies and all racers take home medals.

Maxxis’ Miller, Chaney 1st and 2nd in King of the Hammers UTV
Connect with us