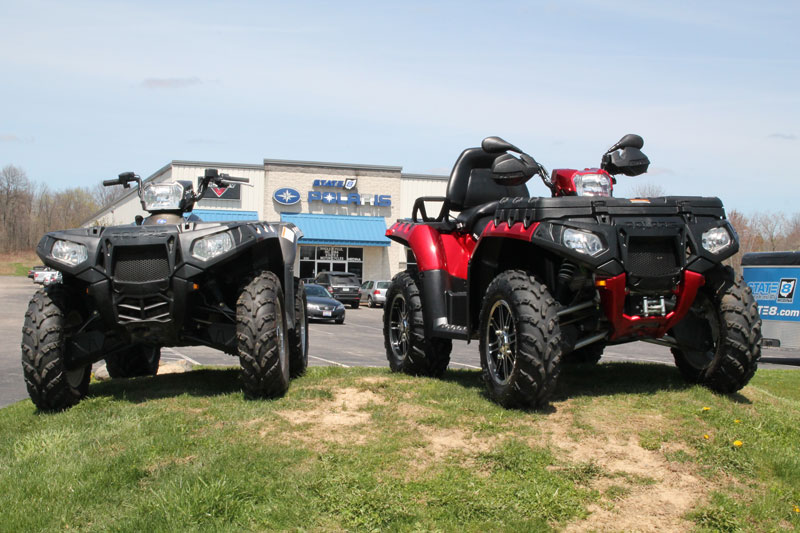 If you’re going to be a powersports dealer, it’s good to know how to sell used bikes. That is exactly what brothers Paul and Kirk Compton (and their father Gar) took to heart their first 10 years in the industry.

This Sales-Driven, Family Business Has Come Into Its Own

[dropcap]I[/dropcap]f you’re going to be a powersports dealer, it’s good to know how to sell used bikes. That is exactly what brothers Paul and Kirk Compton (and their father Gar) took to heart their first 10 years in the industry.

Kirk had been working in the industry since the mid-’80s and later enlisted his brother and father to help him find used bikes to buy and sell. Paul didn’t know much about motorcycles, but he was a fast learner and good at negotiating deals, and Gar (a retired banker) kept an eye on the finances.

“We started selling retail about 20 years ago, says Paul Compton, partner of State 8 Motorcycles in Medina. “We sold only used bikes for about 3-4 years which we bought right out of the classified section in the newspaper. This was back in the day of pagers and pay phones,” he says about their inauspicious start in the motorcycle industry.

By 1995, the Comptons opened a retail operation on old State Route 8 in Cuyahoga Falls, Ohio, selling their pre-owned motorcycles. They decided to call the place State 8 Motorcycles and shortly after set up their first franchise with Suzuki and then Yamaha, and eventually added Kawasaki and Honda, too.

When the Harley dealership was sold as a package deal with the Polaris store, the new owner didn’t really want the Polaris franchise so it died. By the end of 2005, the Comptons purchased the Victory and Polaris franchise. “We weren’t sure if this place was going to fly or not,” says Paul. “We had always talked about opening a second store and this just came along. The same builder built both of our stores, so there were a lot of similarities.”

The high ceilings and exposed beams seem to fit the area and the product mix with its architecture. Many older dealerships have low ceilings and not as much open space. 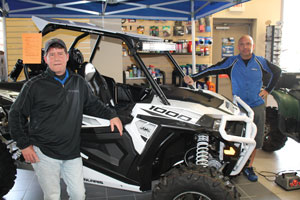 “We have a nice open floor plan so we were fortunate to get this space. We started off just leasing the building. And when we leased, we only had space up to where the service department is now. The back storage area was not built yet.

State 8’s two locations are very different animals. The Falls store is close to Akron and a much larger store that sells a lot of sport bikes and cruisers, as well as gear and accessories and everything in between. The customer base tends to be more Gen Y than Baby Boomers, which are more of the customers they get in the rural Medina location. While the Falls store focuses on many types of customers and is a large multi-line powersports retailer, the Medina location is more focused on Polaris and Victory, as well as Vespa, which is just fine by Compton who has been tasked to run the dealership.

“Many of my customers are buying a $14-15,000 SxS, and often times they buy $7,000 worth of accessories, too. Or they buy a $20,000 RZR and a bunch of accessories. I found that people here have either some land or they own land maybe in Southern Ohio and they keep a unit here to take with them when they go down. Or they own several properties; it’s just a different customer base.” 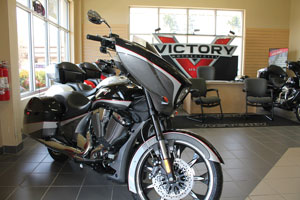 State 8 Medina’s nearest competitor sells product that is more like their Falls store, so they are prohibited by state law from selling the same new brands. “But we sell a lot of pre-owned units,” says Compton. “And used bikes are a big part of what we sell – making up 50 percent of our sales.”

Over the years, Compton says they have gained a lot of knowledge and experience with pre-owned units, and they know if bought right, the units are half sold. “My goal if someone comes in here, maybe I don’t have a new Honda or Yamaha, but there’s something here that will fit the bill. I have trikes, I have BMWs, Moto Guzzis, Harleys and I have Ducatis; I just don’t have them brand new. And if a customer is looking for something in particular, we get a name and number and do our best to find it. If they are looking for something new, I always refer them to our other store.”

With so many years of buying and selling pre-owned units, State 8 has built up a solid network of sources that continue to supply their stores with the used units they need. Compton says they have to have a constant flow of inventory coming in because they sell so many. “I’ll sell maybe 50 used bikes in a month,” he says. “So I have to find 50 to replace those bikes. I carry maybe 100 used bikes here. So it’s very fluid. We are moving them all the time.” 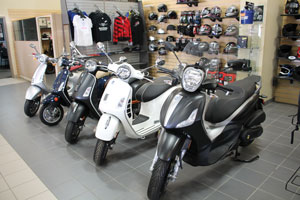 Polaris just started coming into their own right about the time when State 8 bought the franchise. In the ‘90s, Polaris’ off-road models were more or less based on its snowmobiles and it really wasn’t the best product, according to Compton. “Right when we got our store, Polaris revamped its whole line. I mean, they were making two-stroke 4x4s,” he laughs. “They started coming into their own with a much better lineup, and then in 2008 they came out with the RZR and that really took off. From then on it has been good,” he says, noting that he sells more SxSs than ATVs today.

“ATVs are a different animal used because of the nature of what people do on them,” Compton notes. “Most people beat the you know what out of them. I have 15-year-old motorcycles here, and when people walk in and ask to see our used bikes, they only have maybe 4,000 miles on them. But an ATV is used a lot more in this area. People are mudding and partying on them or they’re plowing their driveway in the winter time. It’s hard to find a mint condition 5-year-old quad. But a motorcycle is a different story. They’re usually kept indoors and ridden only on sunny days. So I’ll sell more of those than used ATVs.”

Compton recently added Vespa to the mix because he wanted a new brand that didn’t compete with anyone, and he didn’t want to have to add on more dedicated space. He’s hoping to do that with some other brands down the road.

“In the beginning, Vespa required dealers to build boutique stores, which would have required a big investment. But now they are even throwing them into some car dealerships,” says Compton.

“I have customers who have Harleys and a scooter. They won’t tell their Harley friends but they’ll tell me that they have more fun on the scooter. They can whip it out of the garage and run down to the store without any fuss. And they can store whatever they buy under the seat or in a storage compartment.”

The next challenge for State 8 Medina, according to Compton, is building up some of the other areas. The company has selling pre-owned units down pretty well, but getting to that next level with a dedicated apparel department and accessories is the next step.

Compton acknowledges that some of what has made them strong is the diversity of units they carry. Whether a customer wants a $2,500 used motorcycle or a $20,000 Polaris RZR, Victory cruiser, or Vespa, State 8 Medina has something for everyone who walks in the door.