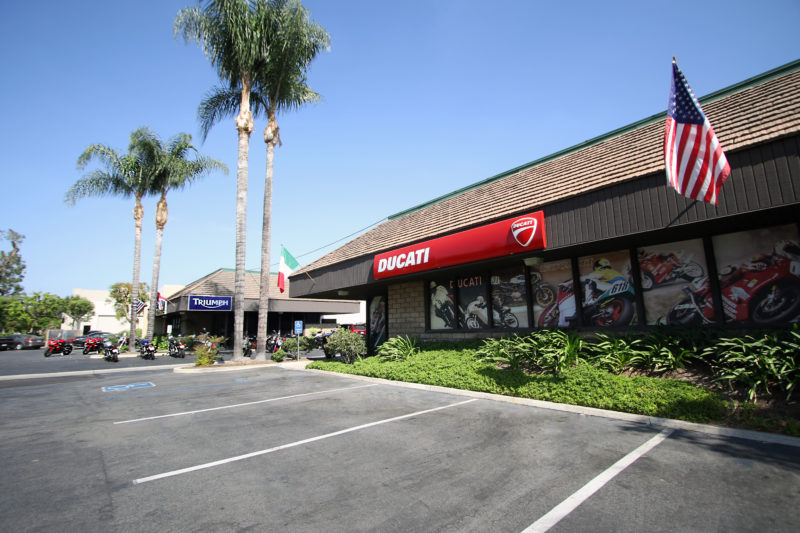 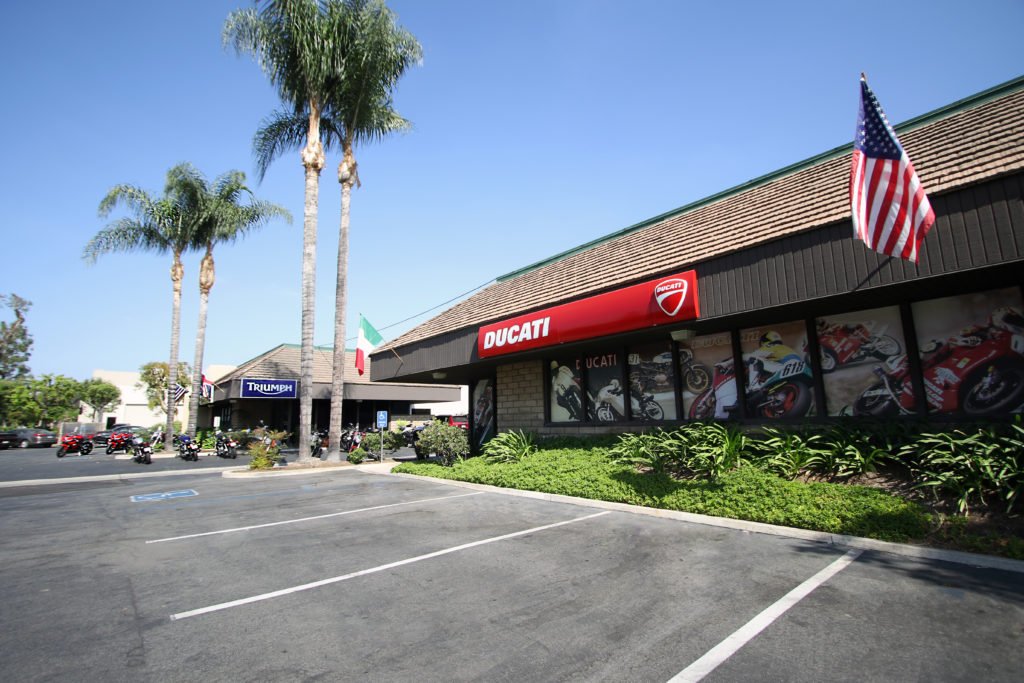 [dropcap]S[/dropcap]outhern California is a hotbed of motorcycling. It’s a place where even wimps who hate rain and cold weather can ride all-year round. It’s also a place where there are motorcycle dealerships around every corner, and distinguishing your establishment from the den of the caveman down the road takes some doing. Tom Hicks and his merry crew have done just that, and in the process have sold more Triumphs than any other dealership in the USA for nine years straight, along with an awful lot of other bikes. 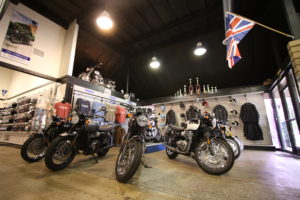 Tom Hicks, the owner of Southern California Motorcycles, (popularly known as So Cal) attributes his success to finding and creating a niche for himself in the retail market and using intelligent, but nonstop, marketing. “The important thing is an understanding that you can’t wait for customers to come in the door. You have to get out and touch people. I built my business on handing out a half-page flyer.”

Starting out as the president of a local motorcycle club, Hicks soon found that he had wrenching skills that others were willing to pay for. His ability with a wrench got him a job with American Honda in 1980. His people skills (another of Tom’s strong points) moved him into Honda’s Customer Relations department. From there he went to Motorcycle Engineering and Product Research. In his leisure time, he set seven world motorcycle endurance records. 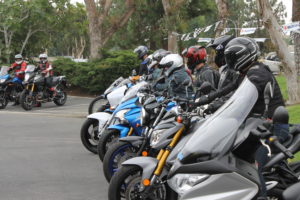 In the meantime, John Bloor was rebuilding the Triumph brand in England. In 1994, after the resurgent Triumph company had established a beachhead in the United States, Tom went to work for the company’s American subsidiary as  the sales manager for the western states, setting up the company’s dealer network for nine states.

Tom was also very involved with Triumph’s marketing and press relations, which, among other things, awarded him the privilege of teaching Pamela Anderson how to ride a Triumph Thunderbird for the movie “Barb Wire.” It also gave him the opportunity to put a lot of miles on all the Triumph models.

Tom’s next career move, in 1997, was to general manager of Race Tech. He led Race Tech into the street-bike market, offering components for various streetbikes including Triumphs. Finally, on April 4, 2000, Tom opened Southern California Triumph in Brea, California, south of Los Angeles– and found something he wanted to stick with.

Tom not only likes selling motorcycles, he is good at it. Within 16 months, Southern California Triumph became the number one Triumph dealer in the nation. In 2015, Triumph announced that Southern California Motorcycles had been the number one dealer in the U.S. nine times in a row, and was the Number One North American Triumph Dealer of all-time. 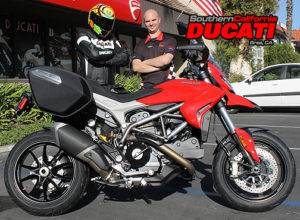 Deciding that if he could do so well selling Triumphs, he could do well selling other brands. Tom added Ducati in 2003 – and quickly became one of the top-selling Ducati dealers. Ducati was followed by Victory in 2005, a pre-owned department in 2010, Royal Enfield in 2011, and most recently Suzuki and Slingshot. The dealership is now known as Southern California Motorcycles.

Tom’s experience in the motorcycle industry has helped him develop a sense of how a dealership should operate. He points out that you don’t get into selling motorcycles unless you are an enthusiast, but you don’t keep your doors open unless you are also a businessman. “In order to meet the payroll, you have to sell bikes,” he says. “You have to stay ahead of the curve. You have to be proactive.”

Hicks has learned that the best way to entice the wary customer across the threshold is to stage events. “Traditional ads cost too much money for the effect they have. I put on an event at the dealership almost every month. I have a presence at every local event – I set up a booth with some bikes. We are not selling the bikes, we are selling the dealership.

“The way I look at it, we have an outside show and an inside show,” Tom continues. “The outside show starts every time someone clicks on our website or sees our booth at a show. We want to be seen as professional, approachable and friendly.”

The shop website is an integral part of the outside show. It is a little complex, as it has to be with all those different brands, but is easy to navigate. It features YouTube videos of the shop, local sensation teen racer Courtney Crone, helmet overviews, social rides and Ducati demo days. The shop posts new videos every two weeks or so, giving customers a reason to check the site on a regular basis.

Another feature is podcasts of Riding So Cal, a radio show (hosted by Tom Hicks) that ricochets around the motorcycle universe with mad abandon, discussing motorcycle insurance one week and Steve McQueen the next. So Cal Motorcycles’ many events are posted on the site, as is a separate newsletter for each brand that So Cal sells.

The inside show starts when the potential customer drives up to the dealership. Tom explains: “Our signage is key to that first impression. I want them to be impressed by us as they drive in and when they park. One thing customers notice – but don’t say much about – is how clean and organized a dealership is. We have a full-time person who cleans. People will never say anything to you, but they will talk to their friends if a bike shop is dirty and disorganized. This is especially true of women customers – if you want women to like your dealership, you have to have clean bathrooms.”

“Another point is how our employees look and act. I send my techs to training all over the world. Our sales and customer service people go to every manufacturer’s training session offered. It is vitally important that our sales people are on the same page, so we have a daily sales meeting. We role play, overcome problems and improve our level of service.” Tom will not be at AIME Expo, but points out that dealers and their staff can benefit from all the workshops and trade education offered there. “You can never learn too much,” he says.

Each brand has a separate showroom devoted to that marque, allowing the one-manufacturer enthusiast to concentrate on that brand without having to navigate through motorcycles he or she is not interested in. “We don’t do a lot of aftermarket goodies except for Arai and SHOEI helmets,” Hicks says. “Our philosophy is to stock everything anyone could want from each OEM.”

Business is great, and Hicks is thinking about expanding his lineup, but cautions that another economic downturn is inevitable in the next few years. He feels he and his staff is ready for whatever happens. “If business is slow, do things! We are not in the transportation industry – we are in the entertainment industry. It’s all about emotions. If you understand people’s emotions, you can be successful, no matter what.

“We are in the perfect place between a mom and pop shop and a supermarket. We still offer individual service, but we have enough on display that our customers can think, ‘I never need to go anywhere else again.’”