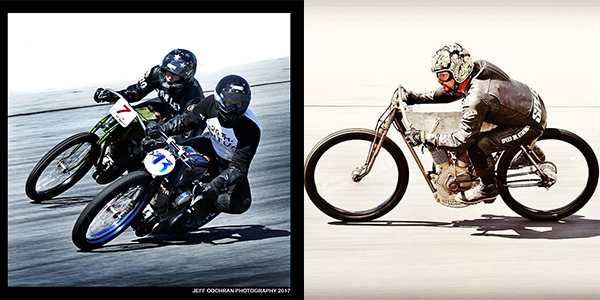 Billy Lane’s Sons of Speed boardtrack motorcycle race is back for a third running during the 25th anniversary of Daytona Beach Biketoberfest. On Saturday, October 21, at 3:15 p.m., thirteen daredevil motorcycle racers will take to the banked track at New Smyrna Speedway in Daytona Beach.

“We’re coming off the second SOS race, which took place at Sturgis this year,” said Billy Lane, renowned bike builder and founder of Sons of Speed. “That was a lot of fun, but nothing beats the banked track at New Smyrna – this is where riders let it all hang out.”

Inspired by early twentieth-century board-track racers, the Sons of Speed race hearkens back to a stripped down, wide-open approach to motorcycle riding. Held at New Smyrna Speedway’s half-mile, banked racetrack, the third SOS race will feature thirteen riders in several different heats, and winners of the heats will advance to a championship round. Each racer will sit astride hand-built racing chassis holding pre-1925 1,000cc American V-Twin engines, and most racers will customize their machines by fabricating handlebars, exhaust, fenders, footpegs and fuel/oil tanks.

And SOS isn’t the only excitement going down on Saturday – in the New Smyrna Speedway parking lot, on the same day, the inaugural Old Speed Show will run from 9 a.m. to 2 p.m.