Editor-at-Large Robin Hartfiel is our tabloid reporter when it comes to finding out who is on the move in the powersports industry. Robin’s many years of experience in the market and hundreds of industry contacts means he usually knows what is happening before anyone else. 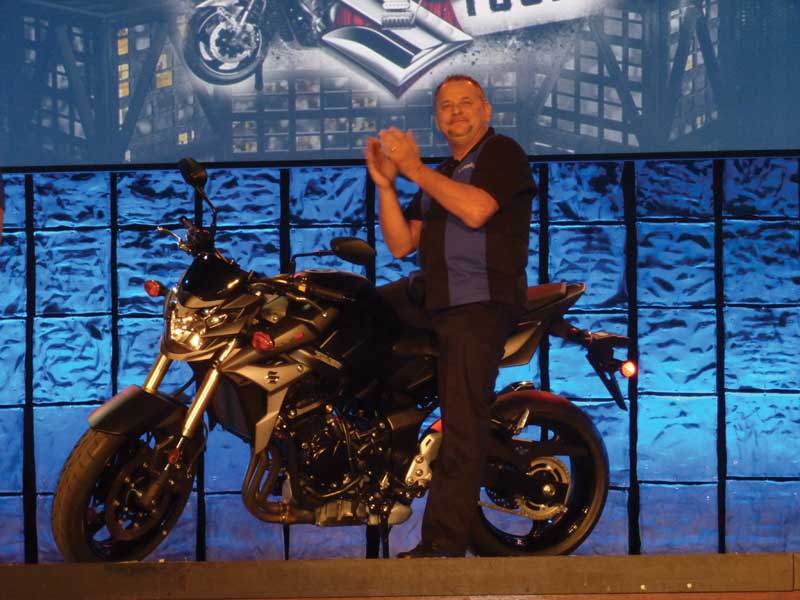 [dropcap]W[/dropcap]hen Suzuki’s Larry Vandiver retired from his role as head of motorcycle, ATV & scooter operations effective February 3, Rod Lopusnak became the new director, operations head, motorcycle/ATV sales operations and will lead the company’s motorcycle, ATV and scooter sales and marketing efforts. In addition to his 16-year career at Suzuki, Rod is a life-long enthusiast. He worked every aspect of a powersports dealership, starting by sweeping floors in his grandfather’s dealership, then at the parts counter, in service and sales, and eventually as general manager of several dealerships in New Jersey.

At Suzuki, Lopusnak held eight different leadership positions, and has built a strong rapport with Suzuki dealers, starting as a district sales manager, and including ATV operations manager andr national sales manager. Lopusnak is well versed in new product development, and was instrumental in launching the QuadSport Z400, KingQuad line and Boulevard cruisers. “Rod is known for his passion for the powersports industry, his decisive leadership and commitment to the voice of the dealers,” said Vandiver. “No one is better suited or more qualified to lead Suzuki and Suzuki dealers to succeed.”

Western Power Sports welcomes industry veteran Greg Berg to the WPS family. Greg has more than 20 years of industry experience, including running his own motocross products business Berg Racing USA from 1994-2004. He then took a job in product development at 661/Tag/Sunline from 2004-2012. Most recently, Greg had been working at Matrix Racing Products. Greg will be specializing in MX hard parts product development for WPS and FLY Racing.

On the street bike side, MV Agusta USA has strengthened its sales team with the addition of Jim McKenna. In his new role as national sales and network development director, McKenna will oversee commercial operations, including dealer relationship management, building and managing the U.S. sales operation and overseeing the dealer appointment process. “MV Agusta is a great and storied brand; and this is the project of a lifetime,” says McKenna. “I am extremely pleased to be part of the leadership team actively working to re-launch this iconic motorcycle company here in the USA.”

Slick stuff from Lucas Oil: Tom Fredrickson has been named COO. Since joining the oil company in 2002, Fredrickson has acted as general manager and chief administration officer, but his new title adds production, marketing, sales and R&D responsibilities. “Tom Fredrickson has been our GM for the past 14 years,” says company Founder, President and CEO Forrest Lucas. “Tom is a member of our senior management team with Bob Patison and myself, and his elevation to COO is richly deserved.”

Word has filtered out from K&N Engineering that Tom McGann is the new CEO. McGann has more than 30 years of performance-driven consumer brand experience, most recently as president/CEO of Spyder Active Sports, a ski apparel company in Boulder, Colo. However, he has a powersports industry background as president/CEO of Motorsports Aftermarket Group (MAG). During his tenure with MAG, Tom and Doug Hood acquired a number of industry leading brands, including Vance & Hines, Renthal, Performance Machine and Mustang Seats. “I’m very excited for the opportunity to lead K&N, a truly iconic brand,” says McGann. “The K&N management team is highly experienced, capable and has the scope to roll out multiple new initiatives.”

In a related move, Doug Hood was named chief financial officer of K&N Engineering. Doug joined the company in January 2014 serving as VP of mergers & acquisitions. Prior to joining K&N, Doug served as CFO Spyder Active Sports with Tom McGann. However, powersports people may know Hood from his gig before Spyder: he was senior VP of corporate development for MAG.

In still more news from K&N, Jesse Spungin is now chief marketing and sales officer. Jesse joined K&N in January 2014 as CMO. “K&N consumers, wholesale and retail customers will be best served by integrating our marketing and sales strategies and implementation,” according to K&N. However, unlike Hood and McGann, he is not a MAG alumni… Prior to K&N, Spungin was VP/General Manager at ConAgra Foods where he lead a variety of brands, including Orville Redenbacher’s, Chef Boyardee, Healthy Choice Soups and Rosarita Beans. With the reorganization and consolidation of sales and marketing functions at K&N, Jon Holder has left the company to pursue other opportunities.

As Yamaha moves its ATV/SxS marketing and product planning functions to Georgia to better align with the factory, the company has added a couple key players to the team. Both Scott Newby and Sarah Tway will work out of Yamaha’s Kennesaw, Ga. office. Newby is the new Yamaha ATV & SxS group public relations supervisor and he brings both dealership and PR experience to the role. After working eight years at a dealership in Duluth, Ga., Newby went to work as the motorcycle sales and marketing rep for tire giant Maxxis International. However, Yamaha dealers will probably know Scott as a Yamaha district manager. He covered Kentucky and parts of Ohio, Indiana and Tennessee for five years before spending the past two years in Western Pa.

Sarah Tway literally grew up in a Yamaha dealership – her parents own a single-line Yamaha dealership in Auburn, AL. Sarah worked every department in that dealership from parts to sales and service. She began working at Yamaha in June 2012 in the customer relations department in Kennesaw where she assisted customers and dealers on various support levels and implemented an internal reference site for the consumer support group service department. Sarah has been serving as the ATV/SxS group marketing coordinator since April 2014.

Dan Stern has sold House of Thunder Harley-Davidson. “Shirley and I have accomplished everything we have set out to do since we opened a Harley dealership in Hollister, Calif. back in 2000,” says Stern. The dealership scored in the top 92 percent worldwide in 2007, 2009, 2010, 2011 and 2013 and was named “The Best Run Harley-Davidson Dealership in the USA” in 2006. “We’ve always said we weren’t interested in being the largest, just the best run and most profitable,” he adds. “We are off to a new adventure – whatever that may be. This doesn’t mean we’re done with motorcycles – far from it … there are already two new projects in the works.”