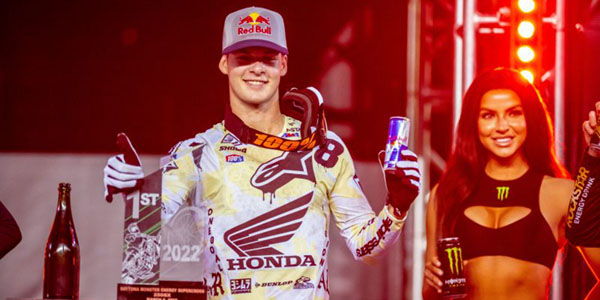 The ninth round of the 2022 AMA Supercross series was also the 52nd Daytona Supercross at Daytona International Speedway, where Team Honda HRC’s Jett Lawrence — in his first racing appearance at the World Center of Racing — took a 250SX East heat-race win before charging to a dominant main-event victory. In the main event, Lawrence took over the lead by turn 2 and quickly established a decent gap. The young Australian rode flawlessly to the checkers with a winning margin of over 14 seconds, taking sole possession of the points lead and the red plate. It was the fifth 250SX win of his career, the second in the three East Region rounds held so far this year and the fourth in his last six indoor races going back to last season.

In the 450SX class, Chase Sexton and Ken Roczen both earned third-place finishes in their respective heat races before Sexton secured the same result in the main event — the seventh premier-class podium of his young career — while Roczen finished seventh. Sexton enjoyed a decent main-event start aboard his CRF450R and gained valuable positions early on as a result of a Jason Anderson/Malcolm Stewart collision. For the first six laps, Sexton pursued the leading Cooper Webb, and although the 22-year-old lost a spot to eventual-winner Eli Tomac with 11 and a half minutes on the clock, he continued to ride the rough track with poise and control, taking the checkered flag in third place. Sexton now sits fifth in the title chase. Meanwhile, Roczen enjoyed a decent main-event start and ran as high as fifth early on before slipping to seventh place.