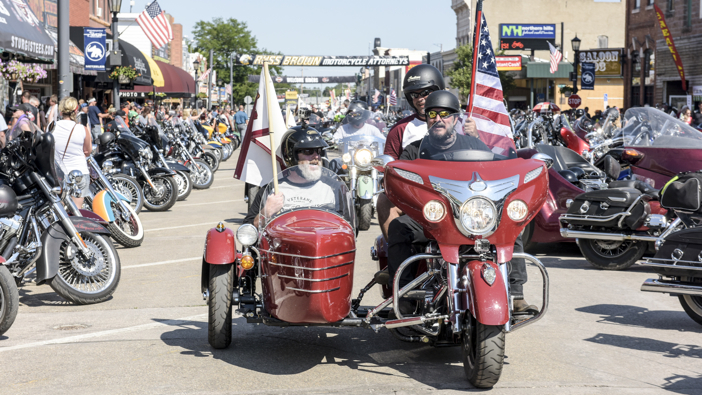 Starting in Los Angeles on July 30, the nine-day ride to Sturgis, SD will provide 20 veterans a chance to use motorcycle therapy as a way to decompress from the challenges of post-war life.

Full Vision Productions has announced that the second annual Veterans Charity Ride to Sturgis (VCR) will be hosted in summer 2016 and a new nomination program, “Hero’s Ride of a Lifetime,” has been added. Starting in Los Angeles on July 30, the nine-day ride to Sturgis, SD will provide 20 veterans a chance to use motorcycle therapy as a way to decompress from the challenges of post-war life.

“Giving veterans an outlet for their stress, and creating a way for them to find emotional balance, is critical,” said ride founder Dave Frey. “As a veteran myself, I’ve used long motorcycle rides for years as a mechanism to decompress. It occurred to me that others would benefit from the power of motorcycle therapy. VCR provides a group of veterans with the benefits of riding, plus a camaraderie and brotherhood that veterans often have difficulty finding on their own.”

The challenges for veterans are well documented. Post-traumatic stress disorder (PTSD) and difficulties with re-assimilation to civilian life are common. Iraq and Afghanistan veterans – many who are still young individuals – are facing a major crisis, with an estimated 20 percent of those veterans having PTSD and/or depression according to a 2014 survey. Motorcycle therapy is one of several effective therapies for veterans seeking relaxation, peace of mind and enjoyment.

VCR 2016 will give 15 ambulatory and five amputee/disabled veterans of various military branches – the majority of whom are post-9/11 vets – the opportunity to work toward overcoming their post-war challenges on the open road. Riding from Los Angeles to Sturgis, the veterans travel through the most scenic back roads of the western United States on the latest Indian Motorcycle models, some with Champion sidecars and custom trikes. They experience the great outdoors and the beauty this country has to offer, using motorcycles as a mechanism for healing. Along the ride route, the group will stop in small towns to meet with other veterans, supporters and riders, and participate in various adventures, including off-road excursions, and street rallies. Upon arrival in Sturgis, the group is treated to a special “Hero’s Welcome” and have a week-long “ultimate rider” experience, taking part in the world-famous Sturgis Motorcycle Rally and further solidifying a brother/sisterhood that was formed on the open roads of the Wild West.

In addition to the veterans chosen by the sponsoring team from various organization, the new program “Hero’s Ride of a Lifetime,” enables the public to nominate two deserving veterans to join the ride.  People are asked to visit VeteransCharityRide.org/heros-ride to nominate their favorite post-9/11 veteran and describe why he or she is deserving of this amazing experience. Two heroes will be chosen to join the group – one rider (motorcycle license and experience required) and one amputee/disabled veteran (motorcycle license not necessary), who will ride in a donated Champion Sidecar. The online nomination program will run from March 4 through April 15. The two chosen heroes will be announced on Memorial Day, May 30th, on VeteransCharityRide.org.