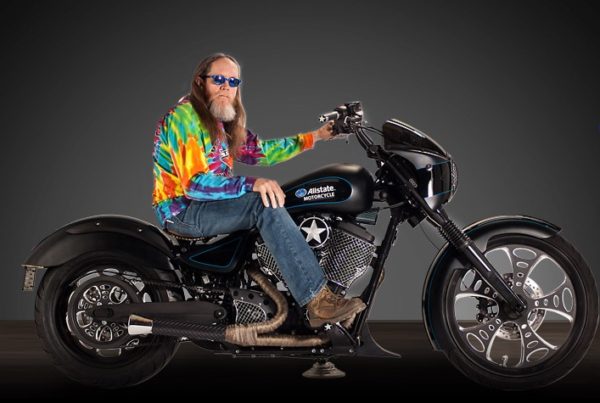 Dear Ma, I hope you’re well up there in Heaven. We are doing fine in Big D. Ya know, life is a struggle, it really is. I absolutely LOVE the motorcycle industry and I guess that makes the struggle bearable for me.

Sometimes I think about some of the decisions I’ve made over the years and I wonder, “What if?” For instance, what if I had never started my bar & grill, Strokers IceHouse, would my motorcycle business, Strokers Dallas, be successful or would it have gone by the wayside like so many other motorcycle shops have over the last 20 years?

My thought process was this: If I only have a motorcycle shop, then people will come in if they are looking for a bike, or maybe they need some parts or maybe service on their bike. Not many people are coming into a motorcycle shop just to hang around, or if they are coming in just to hang around they aren’t spending any dough! BUT, my original thinking was that if I had a bar & grill on the same property as my motorcycle shop, it will bring more people on the property, and then some of them would make their way into the bike shop to spend
some money. So, theoretically I could be making money on both ends.

Ma, what I have figured out after all my years in this business (and my years in the paint business) is that employees are the most important part of a successful business. They are also the biggest headache of any business. I have some great employees that work really hard and I thank God for those people. Without them I would be in a world of hurt. But those good employees are few and far between. Most people you hire these days are only looking for a paycheck.

It seems to me that lots of the young people, say 30 or younger, have a sense of entitlement. I don’t get it. They are so dependent on social media that it’s hard to get them off their stupid cell phones. I once had an employee that was on his cell phone constantly. He was always checking and posting on social media even during working hours. At first I was nice about it, but after several weeks I started to get stern with the young man. That didn’t work either. So I called him in my office and made an official report – that didn’t work either.

One day I saw him on his cell phone and I had enough. I asked him if he was on lunch, he said no. I asked him if he was having an emergency, he said no. So I asked him to give me his cell phone and he could pick it up after he clocked out. He refused to give it to me. I told him that his other option was to go put it in his car, he refused. I informed him that he either ditch the cell phone during business hours or he no longer had a job, he still refused. He claimed that he had to have it for emergencies. NOPE.

I knew he couldn’t be trusted with it and I was done giving him warnings. He still refused to give it up so I had no choice but to terminate the young man. He didn’t like it and I didn’t like it either, but at the end of the day, that’s the decision I had to make as an employer. The other employees took note of the situation and I have not had any more problems with cell phones lately!

Bottom line: business is tough, and to survive I must make good decisions. All day long I put out fires and I make hundreds of “quick” decisions. I just hope and pray that I get more of them right than wrong. So far so good, Ma!

Anyway, I gotta go for now. I have meeting with an aftermarket parts distributer that’s trying to get some of my business. Problem is, he was supposed to be here at 2 o’clock and it’s now 4:30 pm. I can almost guarantee you that this cat will be younger than 30 years old. Hold on a second, I’ll let you know after the meeting. Guess what, the salesperson was 28. Yes, I asked! He apologized and said that he woke up late and that his entire day was off by a few hours.

I asked why he didn’t call to tell me and he said he figured I was here all day and that it would be alright. I smiled and shook his hand and pointed him to the door. He looked shocked and I told him that I didn’t do business with somebody who was so unprofessional and couldn’t be counted on. I imagine his boss will be calling me tomorrow morning, hopefully he’s more mature!

Love ya, Ma!
Your boy, Rick

Advertisement
In this article:Can ya dig it?, employees, Millennials, Personnel, Sales, Strokers Dallas

‘What If’ Scenarios Playing Out In My Head