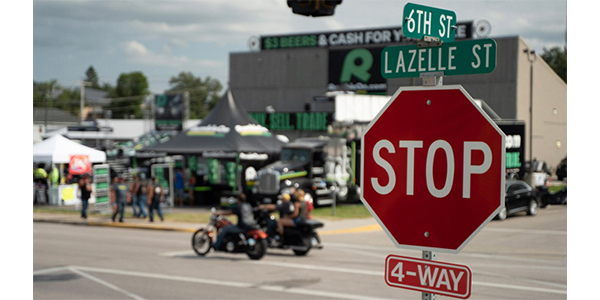 It might not have rained that much at the 79th Annual Sturgis Rally, held near the Black Hills of South Dakota, but that doesn’t mean RumbleOn didn’t make the sales pour in.

It might not have rained that much at the 79th Annual Sturgis Rally, held near the Black Hills of South Dakota, but that doesn’t mean RumbleOn didn’t make the sales pour in. With triple the amount of motorcycle sales over last year’s event, the company announced that it has surpassed 300,000 cash offers, a 300% increase since it reported 100,000 in October of 2018.

“It was less than a year ago that we broke a hundred thousand cash offers – today we have more than tripled that number. This marks a huge milestone for RumbleOn and highlights just how quickly the company has grown and disrupted the industry,” said Marshall Chesrown, president and chief executive officer at RumbleOn. “Like our previous success stories this year at Daytona Bike Week and the Republic of Texas Rally, RumbleOn continues to push the envelope and create uniquely inviting spaces, all while giving potential customers the opportunity to trade in or purchase a new motorcycle.”

Partnering with marquee brands like Dairy Queen, Voodoo Bikeworks, BON & VIV and Grounded, RumbleOn completely took over the corner of 6th and Lazelle Street to the delight of over half a million event attendees. With over a hundred motorcycles on the lot, great food, cheap beer and multiple games for cash prizes, this year’s Sturgis team shattered the records set in 2018 – over 25,000 visitors (a 329% increase), 18% longer interaction times, and triple the merchandise sales.

“Sturgis is one of those events that sets us apart from the competition because from the ground up, our marketing activation is designed around our customers having a good time, not being pressured with high-intensity sales tactics or overpriced entertainment,” said Andrew Peska, event marketing manager at RumbleOn.

To top it all off, RumbleOn even gave anyone who stopped by a chance to win a brand new custom RumbleOn Motorcycle. The winner will be announced later this year.