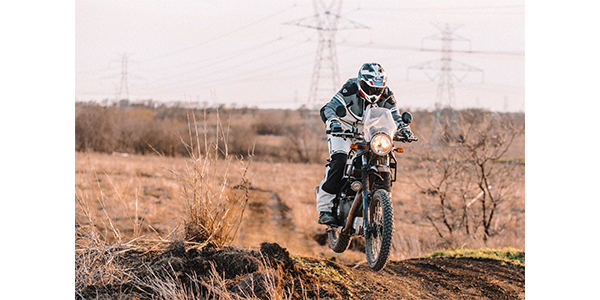 Compared to the massive pavilions and runway models from hometown heroes like Ducati and the Aprilia/Moto Guzzi/Vespa team, the low key unveiling of the little Himalayan was on a pile of dirt… literally.

Royal Enfield first introduced the Himalayan at the EICMA show back in 2016. Compared to the massive pavilions and runway models from hometown heroes like Ducati and the Aprilia/Moto Guzzi/Vespa team, the low key unveiling of the little Himalayan was on a pile of dirt… literally.

However, the unveiling by Eicher Group CEO Siddhartha Lal and Pradeep Mathew, project leader for the new bike, proved to be a surprising show stopper. Their presentation of “the bike that conquers nothing” drew a laugh from the global journalists, but they were crowded 10 deep to see it.

It seems the concept of an unassuming middle weight and ultimately versatile motorcycle resonated with the audience in Europe.

Fast forward to 2018, and as this issue was press; U.S. dealers were taking delivery of their shipments of the 411cc “non-extreme machine,” as Royal Enfield North America president Rod Copes put it.

“In this era of extremely focused and niche marketed motorcycles, the Himalayan is definitely a throwback to an earlier era,” said Copes, the ex-Harley-Davidson executive.

Despite his expertise in the heavyweight cruiser market, Copes was told to throw away The Motor Company playbook and approach Royal Enfield as a blank canvas.

“Siddhartha Lal specifically told me, ‘you can’t use the existing motorcycle marketing game plan. We want to be different… reinvent the market.’”

Mission accomplished with the Himalayan.

“We are the only motorcycle company focused solely on the middleweight segment,” Copes said. “We believe this space is severely underserved. The Himalayan will join our other motorcycles in providing an experience that is fun, accessible and affordable – back to what motorcycling used to be in the early days. We call this the ‘Return to Pure Motorcycling.’”

Project manager Mathew joined Copes and the journalists at TexPlex in Midlothian, Texas, and reiterated that the bike was not purposely built to fit into a specific market niche for American consumer demographic gap… quite the opposite. Take the 31.5” seat height and ergonomics for example.

“The point was to allow the average Asian person to be able to put his or her feet flat on the ground,” Mathew said.

He also reiterated the ergonomic sync between foot pegs, handlebar and seat height; what makes it comfortable for all day riding while still making it agile enough to hop curbs and negotiate around-town traffic in India.

“We never intended to make this motorcycle available in the U.S.,” Mathew said. “Rod had to beg Mr. Lal for it.”

The fact that the oversized pannier mounts double as sari guards further demonstrated this bike was not intended for the average American cruiser customer.

“In India, we don’t segment motorcycles into niches,” Mathew said. “Instead, all two-wheelers need to be capable of doing everything… touring, commuting, urban and even light off-road. Unlike the U.S., we don’t strive for higher horsepower or faster 0-60 times, we want fuel economy, durability and greater range.”

The four gallon tank and 70 MPG provides a range well over 250 miles.

The Himalayan was targeted at the home market, from the name to the EFI mapping curve. Not a bad strategy considering the fact that India has surpassed China as the number one powered-two wheeler market in the world. More than 48,000 units a day are sold in India. This helped make Royal Enfield the fastest growing motorcycle brand in the world.

“There is a growing market for middleweights, both globally and in the U.S.,” said Michael Roark, Vice President of sales and dealer development. “Royal Enfield takes riders back to a time when middle-weight riding was what we wanted. We’re committed to bringing the fun and authentic riding experience that the boomers and generation Xers grew up with to a new generation of future enthusiasts – millennials. Royal Enfield North America is looking for and is excited to talk to both traditional and unconventional dealer partners.”

While they are looking for “unconventional” dealers, Royal Enfield North America offers traditional support including flooring from Wells Fargo and retail finance from ThunderRoad Financial. Add in a healthy dealer margin and generous terms to support demo bikes and Royal Enfield dealers can not only reach new customers, but make money doing it.

“Every dealership is different, but ideally, we would like for them to devote 500 square feet, display three to five bikes and have a demo unit,” Roark said.

He had a model dealership set up in Texas to show some of the range of PG&A from the newest division of Royal Enfield.

“The United States motorcycle market is top-heavy… 75 percent of bikes are heavyweight cruisers and 15–20 percent  are middleweights with a handful of lightweight bikes,” said Copes. “However the new customers are looking for less… less complexity, smaller displacement and more affordable machines. We’ve got five to 10 years to fundamentally change the way we do business. I believe the middleweight segment is the perfect starting point.”

All this talk about meeting needs for an emerging global market and no mention of horsepower, performance or price? Definitely not the usual play for introducing a new bike for the American marketplace. So to is Royal Enfield’s approach to
the market.

“We weren’t even supposed to get this bike, so there are no unreasonable expectations,” said Copes. “The $4,499 price point is a rational way to reach new, middleweight customers… Royal Enfield is in this for the long haul. Our CEO looks at the time in decades, not in quarters. He is looking 10 to 20 years out.”

It is this long-term view that recognizes the value of the U.S. marketplace for not only the Himalayan but bikes still on the drawing board.

“It’s that important that we are the leaders in the middleweight segment in the United States because we are such an influential market around the world,” Copes said. “The bottom line is the motorcycle market is evolving. So we as leaders need to evolve our strategies as well.”