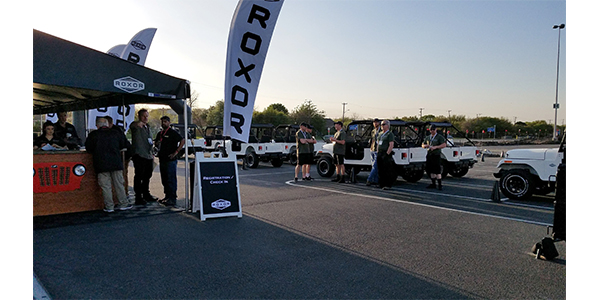 While the dealers were holed up in a local hotel banquet room going over the value proposition along with the features and benefits of the new vehicle, about a dozen automotive and moto media were staked out at the Knibbe Ranch outside of town for a first spin and introduction to the machines. 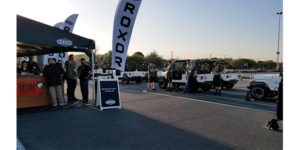 Everything is bigger in Texas, and such was the case for Mahindra’s first dealer meeting and media launch of the category-shifting UTV – ROXOR.
MPN was on hand in San Antonio’s Alamodome a little bit early for the Final Four basketball tournament in March, but fortunately, there was a fresh fleet of ROXORs to be tested in a makeshift parking lot obstacle course.
While the dealers were holed up in a local hotel banquet room going over the value proposition along with the features and benefits of the new vehicle, about a dozen automotive and moto media were staked out at the Knibbe Ranch outside of town for a first spin and introduction to the machines.
“We had phenomenal attendance with most of the 280 dealers we have signed to date making the trip to Texas,” said Luc de Gaspe Beaubien, vice-president, sales & service. “This is a true testament to the enthusiasm that is behind this new product. Dealers are hungry for something new and different, and ROXOR delivers on that need,” he concluded. Beaubien projects the company will easily reach its goal of 300 dealers by end of Q1.
The meeting was designed to introduce the new dealer body to the Mahindra Automotive North America management team and conduct product seminars and test drives, while also presenting the future plans for the ROXOR line.
Ron Seidner, the GM from Bert’s Mega Mall in Covina, California, said that he thinks the ROXOR will appeal to a different customer than they have now. “We are excited to sell it. It’ll bring in maybe the old Jeep guy or whoever we don’t already reach with a RZR.” Ben Powning from Michael’s Cycle Works, another dealer from Carson City, Nevada, said that he thought the company’s history was interesting and was optimistic about the future growth for ROXOR.
Unlike the traditional belt-driven vehicles long accepted in the Side-x-Side category, ROXOR offers a simple, industrial-strength approach, featuring a steel body on a boxed-steel frame, a heavy-duty Mahindra turbo-diesel four-cylinder engine and an automotive style five-speed manual transmission.
For Jeep guys, the giant UTV looks very much like a cross between a CJ-3 and CJ-5. How can they make a vehicle that looks so much like a Jeep? Mahindra has been a licensed manufacturer of the Willys platform since 1947 and still makes a similar vehicle called Thar (pronounced Tar) in India for their domestic market. The ROXOR is based loosely on the Thar, sharing some factory tooling and components. But this vehicle is made exclusively for the North American market.
Some of the media referred to the ROXOR as a “tank” because of the stiffer ride and heavy-duty feel to the vehicle. However, most were impressed with what MANA (Mahindra Automotive North America) has done in a short period and believe it will fill a niche market in between traditional powersports and automotive off-road for a variety of customers. In fact, there will be a whole line of accessories to follow. And then there will be other iterations of the ROXOR down the road.
We’ll stay tuned and keep you abreast of their progress. With the financial resources and significant investment in the Detroit Metro area, look for much more to come from this newcomer to Michigan.