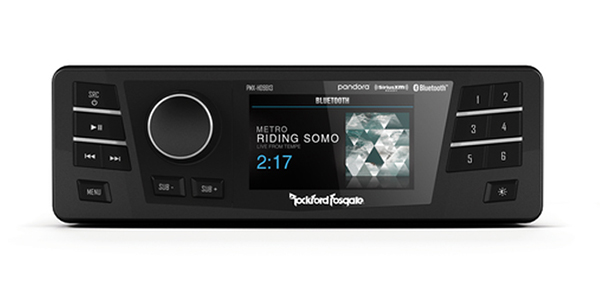 Rockford Fosgate announced the latest edition to their line of motorcycle audio products. The PMX-HD9813 source unit is designed as a factory replacement for 2006-2013 Harley-Davidson Street Glide, 1998-2013 Road Glide and 1998-2013 Electra Glide motorcycles.

“We set out to deliver a replacement radio with class leading features and factory fit and finish, that is weatherproof, easy to install and allowed the rider to keep all the functionality of their factory handlebar controls,” explained Jake Braaten, Rockford vice president of new product development and engineering. “With this new radio I believe we did all of that and gave Harley-Davidson owners the added benefits of an ultra-bright display that they can see even in direct sunlight as well as controls that are adjustable even when wearing gloves.”

In addition to streaming audio from a smartphone, the PMX-HD9813 also features an AM/FM Tuner with programmable pre-sets, a seven-band graphic equalizer and delivers 50 watts x four of power to the speakers. Installation is also made simple by using the factory mounting points and factory connectors.

Detailed product information can be found on the company’s website and the radios will be on display at the upcoming 2019 Sturgis Motorcycle Rally August 2 through 11 in Sturgis, SD.