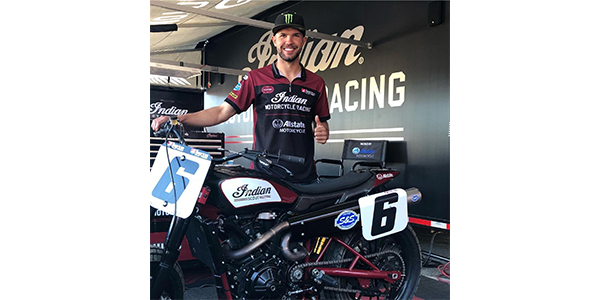 Road 2 Recovery Foundation is asking for donations to help X Games Flat Track racer, Brad “The Bullet” Baker after he suffered a spinal injury during practice.

Road 2 Recovery Foundation is asking for donations to help X Games Flat Track racer, Brad “The Bullet” Baker after an injury during practice.

On Sunday, July 22, Baker high-sided over the handlebars and suffered a spinal cord injury. He was immediately transported by EMS to a local hospital in Minneapolis where he underwent surgery to repair the multiple fractures to his T6, T7, and T8 vertebra. These fractures released bone fragments that were putting pressure on his spinal cord causing paralysis from the middle of his back down. His surgeons fused his T3 through T10 together, placed a drain in his back to remove a hematoma, and addressed his bilateral broken seventh ribs.

The good news is that his spinal cord was not severed and the surgery to repair his vertebra and release the pressure on his cord went well. On Tuesday, July 25, his doctors were able to remove the drain.

As of now Baker has not regained movement of his lower body. He states that he has some tingling and burning sensation in his feet and can feel some vibrations in his knees. Baker is already starting in-patient therapy at the hospital and is looking into in-patient therapy hospitals closer to his home in Washington State.

Being the 2013 Grand National Champion and third youngest to become a champion in the history of the sport; Baker is no stranger to hard work and the dedication that will be needed in the upcoming months.

He does have insurance that will cover some of his hospital expenses but not all and he will have years of physical therapy ahead of him. If you are able to donate to Baker’s R2R cause, click HERE.