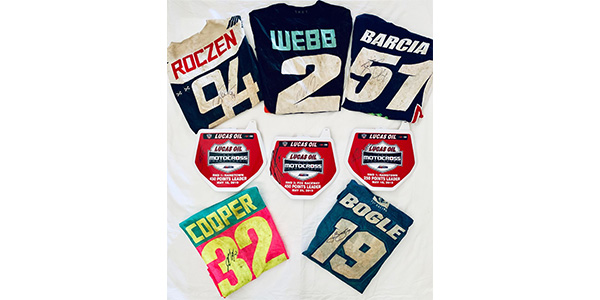 A stacked eBay auction featuring an array of exclusive memorabilia items from this past season is now live, with more than 40 items to bid on.

In partnership with MX Sports Pro Racing, the Road 2 Recovery Foundation (R2R) is offering racing super fans a chance to bid on a part of American motocross history. A stacked eBay auction featuring an array of exclusive memorabilia items from this past season is now live, with more than 40 items to bid on, including autographed jerseys and number plates from the 2019 Lucas Oil Pro Motocross Championship.

The auction commenced on Sept. 9, and will continue for a full seven days, concluding on Monday, Sept. 16, at 12 p.m. ET / 9 a.m. PT. For anyone that considers themselves to be a super fan of the sport, this is an opportunity they won’t want to miss out on!

Special items available for bidding include a race-worn, autographed Ken Roczen jerseyfrom the GEICO Motorcycle Budds Creek National, with the proceeds going to the Jonathan Mayzak Memorial Fund, as well as limited edition R2R logo jerseys worn at the Circle K RedBud National, each signed by some of the series’ top riders. Additionally, signed red number plates from all 12 rounds are available, featuring autographs from the point leader in both the 450 Class and 250 Class following each respective National.

The auction is part of the special partnership between MX Sports Pro Racing and R2R, and wouldn’t be possible without the support of the series, riders and gear companies. The causes that will benefit from this auction are R2R, Blake Savage and the Jonathan Mayzak Memorial Fund. Each item references which cause the proceeds will benefit.

R2R would like to give a special thanks to Team Honda HRC’s Ken Roczen and all of the teams, riders, and companies who generously donated to this charitable auction, which is garnered to help raise funds for great causes throughout the industry.

Vance & Hines: Creating a Surge of Horsepower at Sturgis