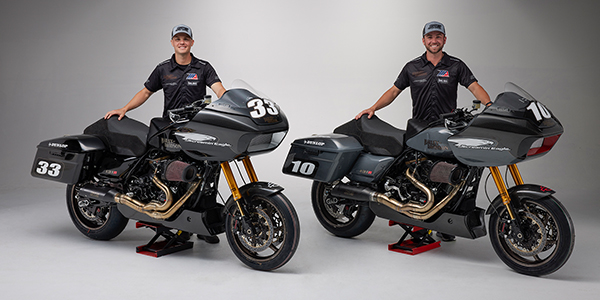 The Harley-Davidson Screamin’ Eagle factory racing team will field multi-talented racer Travis Wyman as a second entry in its MotoAmerica King of the Baggers road racing series. Travis Wyman will race a factory-prepared Harley-Davidson Road Glide Special powered by a modified Screamin’ Eagle Milwaukee-Eight 131 Performance Crate Engine. He joins his brother, Kyle Wyman, on the two-rider team for the King of the Baggers race June 11-13, at Road America near Elkhart Lake, Wis.

In addition to its factory team effort, Harley-Davidson is offering a nearly $30,000 cash contingency program for qualified Harley-Davidson racers competing in the King of the Baggers series.

“We are ready to turn up the heat in MotoAmerica at our home track of Road America by adding Travis to the Screamin’ Eagle factory team,” said Jochen Zeitz, chairman, president, and CEO Harley-Davidson. “The King of the Baggers series is bringing big excitement for fans and we’re pleased to add to the show by expanding our team to two top riders representing Harley-Davidson and Screamin’ Eagle.”

The three-round MotoAmerica King of the Baggers series is for race-prepared, American V-Twin touring motorcycles equipped with a fairing and saddlebags. In the series debut on May 2, at Michelin Raceway Road Atlanta, Kyle Wyman placed second on the Harley-Davidson Screamin’ Eagle factory Road Glide Special motorcycle.

Round two of the King of the Baggers series is June 11-13, at Road America near Elkhart Lake, Wis. The series continues July 9-11, at WeatherTech Raceway Laguna Seca, CA.