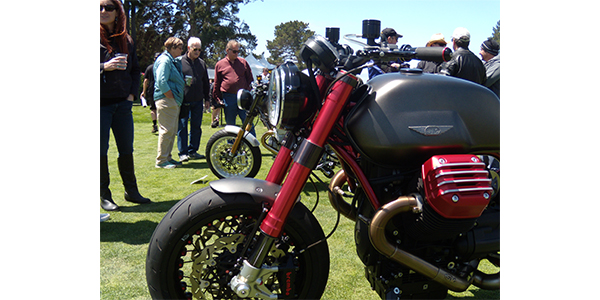 The Quail Motorcycle Gathering in Carmel, CA, just celebrated its 11th year, with more than 3,000 attendees exclaiming over the 350 spectacular motorcycles on display.

The Quail Motorcycle Gathering in Carmel, CA, just celebrated its 11th year, with more than 3,000 attendees exclaiming over the 350 spectacular motorcycles on display. The Gathering, held on the putting green of an upscale golf course, was ringed with tents of retailers marketing to the crowd.

Honda, Indian and Ducati all brought new bikes to display, and Ducati offered demo rides. Harley-Davidson brought its prototype LiveWire electric motorcycle and encouraged attendees to sit on it and twist the throttle. There were also many retailers on site with general interest merchandise or services for sale. Sales appeared to be brisk.

In addition to those exhibitors, several of the vintage clubs had displays as did quite a few retailers who have a special focus on the vintage market, such as Hagerty Insurance.

These exhibitors are only some of the numerous businesses large and small catering to the profitable vintage market. They range from the machine shop retiree who makes and sells a few parts to million-dollar wholesalers. Those who own old bikes are often looking to upgrade them with modern components, and will look to vintage-themed businesses like those at Quail to get their bikes looking and running great.

Multiple Sides of the Market

“When you are targeting a vintage market, you are selling to multiple demographics,” Jeff Berry of Revival Cycles said. The company is a hand-built motorcycle workshop in Austin, TX, which offers a full range of services for vintage, rare and performance motorcycles.

“There are people in their 60s and 70s who want to restore and ride a bike they had when they were a youngster, or one that they wanted badly when they were young but couldn’t get for one reason or another. It’s a kind of a hobby.

“Then there is the younger generation, who are looking to get out of cars,” Berry continued. “Other people want to craft an artistic statement — something that speaks to them. Many crave a hands-on experience. They are interested in crafting something.

“We are bringing vintage bikes into the 21st century,” Berry said. “People come to Revival because this business shares their enthusiasm.”

The company’s website, revivalcycles.com, features incredible photos of their custom builds, including their popular birdcage BMW, as well as a video series.

Another Quail exhibitor, Revival Parts (no connection to Revival Cycles), manages four businesses that cater to specific segments of the vintage community, with each of these businesses sought out by a different demographic. Randakk’s Cycle Shakk supplies owners of older Gold Wings with carburetor rebuild kits and other parts to keep their tourers running. Mike’s XS is a mecca for owners of older Yamahas. Z1 Enterprises sells parts for older Kawasakis and other Japanese motorcycles of the 1970s. Dime City is a supply house for people building cafe racers, customs and brat bikes.

“Our customers range from age 20 to 70,” Russ White, Dime City’s general manager, said, but the company’s clientele tend to be mostly younger people, many of whom are price conscious. These customers are often building a two-wheeled personal statement that can also be used as a daily rider. Mike’s XS and Z1 Enterprises are often contacted by older people, some of whom are trying to keep a beloved bike running and others who are planning to enter a restoration in a concours competition. To these people, quality and authenticity are much more important than price.

Revival Parts courts the patrons of Dime City and internet-savvy customers of the other businesses via social media posts and email blasts that inform consumers of new parts availability, educational videos, events and interesting custom motorcycle builds. Since many Dime City customers are either vintage racers or vintage racing fans, Dime City also supports the Antique and Historic Racing Motorcycle Association (AHRMA) and posts racing news and videos on its website.

Z1 Parts makes hard-to-find components for 1970s Kawasakis, and also stocks a limited range of Honda and Suzuki parts. Adriana Arroyo, the office manager and head of customer service, said that the majority of enthusiasts, some from as far away as South Africa and Japan, find the company through searching for a specific part online; other customers call Z1 Parts through word-of-mouth referrals.

“Our customers appreciate the phone line,” Arroyo said. “Many are from an older age group and are not comfortable with computers. They like personal contact and the human touch. We try to help with suggestions and look up parts numbers for people who call. We also price match our products. Our customers are thankful for the help and grateful that we carry what they need.”

A variety of gear was introduced and spotlighted at the Quail Motorcycle Gathering, including a denim armored one-piece driving suit, new airbag vests and airbag jackets, as well as saddles and pillions.

The stylish women’s motorcycle gear of Atwyld was displayed, much of which has an old-school look. Anya Violet, one of the three founders of the business (with Jaime Dempsey and Corinne Mayer), explained that a lot of people gravitate to a vintage look, even if they have no interest in owning old two wheelers.

“People like a vintage look constructed of modern materials and modern safety components. It’s what sells for us,” Violet said. The other element of Atwyld’s success is a sense that the company genuinely cares about its customers and is willing to go the extra mile for them. “These guys have absolutely awesome customer service!” commented a shopper.

The Quail Motorcycle Gathering has grown every year. Clearly, there are a lot of powersports enthusiasts who appreciate old bikes and enjoy items that relate to them. The many businesses that find present-day success in the past do so by tapping into this enthusiasm.

MSF Collaborates with Military on Rider Mentorship Program
Connect with us