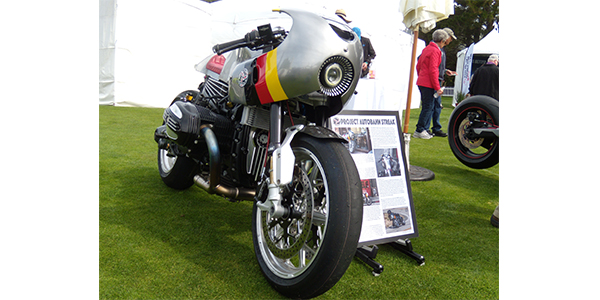 This year, Quail’s 10th anniversary, over 3,000 enthusiasts showed up to ogle 350 show motorcycles.

The Quail Motorcycle Gathering is the Pebble Beach of motorcycle shows. It takes place on the putting green of an upscale golf resort in Carmel Valley, near California’s Central Coast. The show awards are crystal, the chef-prepared lunch is served on decorative china and music is provided by live bands. Despite the hefty entry fee, the place is always packed.

This year, Quail’s 10th anniversary, over 3,000 enthusiasts showed up to ogle 350 show motorcycles.

“Indian has had a pavilion at the Quail Show for several years now. It’s being part of history and being part of a gathering of enthusiasts,” said Rey Sotelo, general manager of Hollister Indian. “We also sell bikes and apparel, and always do well. Seriously, most vintage bikes are show bikes, and many people here need an everyday rider. Why not ride a piece of nostalgia, like a new Indian?”

The show venue is ringed by pavilions for commercial displays and many OEMs join in the celebration. Piaggio appeared with some eye-catching Moto Guzzi customs and the new Aprilias.

Ducati not only had a major presence celebrating the 25th anniversary of the Monster, but Jason Chinnock, CEO of Ducati North America, and Nick McCabe, Ducati regional business manager, were both present and thoroughly enjoying themselves.

“We are enthusiasts, and love all bikes, old and new,” Chinnock said. “Old bikes have a different soul and require time to tinker. I went on the Quail ride yesterday, which is full of classic bikes, and we ended up talking about modern bikes. Ducati, after all, has a rich heritage, and the Monster was a category-changing motorcycle. It established the naked bike category and the concept of an urban sport bike for city riding.”

Other OEMs present were Royal Enfield, Zero (who brought demo bikes) and Honda, presenting its 2018 all-new Gold Wing to a lot of interested attendees.

“The Quail is an excellent opportunity to showcase and market our Honda brand,” said Jon Seidel, assistant manager of powersports communications (Motorcycle division) for American Honda. “We are here to celebrate the history of the Honda Gold Wing, starting with the landmark 1975 Gold Wing. Today, we displayed over 40 years and all six generations of our flagship machine. We have an opportunity here to talk to consumers and enthusiasts, and we have always found there is a lot of interest here at the Quail. This event has grown and expanded in the 10 years that it has been in existence, and it is a great place to get in front of our customers and Honda enthusiasts.”

The 11th edition of Quail will be held in May 2019. For more information, visit signatureevents.peninsula.com/en/Motorcycle/Motorcycle.html.

Quail Motorcycle Gathering 2018: Your Customers Went, Where Were You?