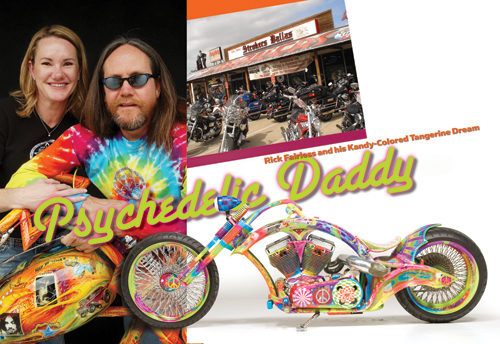 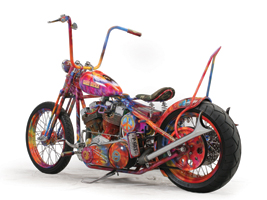 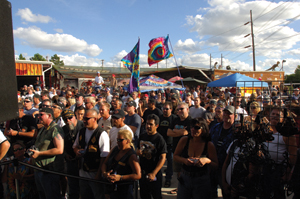 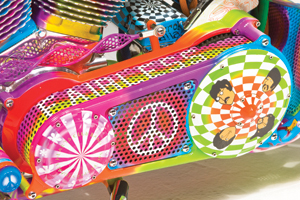 A Harley is a great motorcycle, but it’s like a Chevrolet. It’s nothing special,” Rick Fairless said on his podcast, Rick & Joe’s Dum Ass Club. “You are driving a John Deere tractor. You can’t outrun me on foot with your [effing] Harley.”

Fairless is not a man to pull punches. He is the owner of Strokers Dallas custom motorcycle shop along with Strokers Ice House, a popular bar and a tattoo parlor. And, yes, his dealership sells Victory motorcycles. The effervescent Fairless loves to extol the brand’s virtues while body-bagging their competition.

Spend a few minutes trolling reality television, and you can quickly learn that Fairless’ forthrightness is genetic. His shop has been the subject of two reality series: Texas Hardtails on the Speed Channel and Ma’s Roadhouse on TruTV. Both are based around the activities at Strokers Dallas and take you through a series of misadventures involving the staff, which includes the attractive women who work at Strokers Ice House. His mother, Sharon, was a significant figure in Texas Hardtails, and she’s the outright star of Ma’s Roadhouse.

For the most part, the show doesn’t raise the bar set for reality television.  Rick’s staff consists of family — which is one of the many things he loves about the job, incidentally. On the show, the dealership crew solves difficult dilemmas such as a tie between two bikini-clad contestants at the Jell-o wrestling event held in front of the store. Rick casts himself as the foil, an anachronistic throwback caught up in the business of making motorcycles while keeping his crazy family together. Amidst all this madness, the straight-talking, no-punches-pulled Sharon comes off as the real deal.

“Everybody knows someone like my mom,” Fairless said. “She’s a woman who speaks her mind. If she’s thinking it, she’s going to say it.”

She’s the manager at Strokers Ice House, and she treats her customers with less respect than Rick affords Harley-Davidson. In a scene from Ma’s Roadhouse, Sharon berates a customer mercilessly until the man threatens to take his business elsewhere. She tells him to walk right down the street and leave. When Rick raises his voice a bit, suggesting she treat customers better, she responds that she just plain doesn’t like the guy. And the customer defends her, despite the insults she heaped on him. Such affection for those who cut through the crap and tell it like it is is entertaining and somehow not surprising. And with her gravelly voice and sharp edge, Sharon is completely believable.

Her trip to Strokers began when Rick was born. She was all of 16 years old. She had Randy, her second son, a year later. With nothing more than an absentee husband and a few bucks in her pocket, the young woman raised the two boys in Irving, Texas.

She didn’t tolerate shenanigans and kept Randy and Rick in school and, for the most part, in line. The boys often visited an uncle that owned a 650-acre ranch in east Texas and developed the motorcycle bug. The uncle owned a Honda 350 as well as a Trail 70. Rick and Randy were too small for the 350, but the 70 fit them perfectly.

“We had a track where we would start at a certain spot and take a stopwatch and see who could go the fastest,” Rick said. “If my brother beat me, I’d say, ‘You didn’t go all the way to the front gate! I bet you turned around at the big tree!’”

Motorcycles became a center point of the two boy’s lives, particularly for Rick. He owned a little Suzuki 50 and, in high school, drove a Honda 100 that he dressed up with Preston Petty tank and fenders.

In high school, Rick spent his time as most kids of the era did — getting into a little trouble, getting by in school and having a good time. According to Rick, a turning point in his life came when he was 19 years old.

What he decided was that it was time to make something of himself. He took a job working for his uncle at the Roach Paint Company. He started as the stock boy and put his nose to the grindstone.

“I want to be somebody,” Rick said of the time. “I want be able to take a pretty girl out to supper, and I want to drive a new truck. The things that I wanted in my life back then is I wanted a new Harley-Davidson, I wanted to own my own home, and I wanted a new pickup truck. That’s what I worked for, was to get those things.”

Rick executed his plan and worked hard. He climbed the ladder to become an order puller, truck driver and eventually the manager at the Irving store. He showed up every day, put it out there and did well. When the Roach Paint Company was bought out by Glidden, Rick found himself with more opportunities. He became one of Glidden’s top salespeople.

Randy had also done well for himself, graduating from the University of Houston law school and becoming a partner in a very successful law firm in Houston.

This was the mid-1990s, and Rick was ready for a new challenge. He was urged to open a paint store but decided to follow his passion and go into the motorcycle industry. In 1996, he opened Easyriders Dallas, a franchised custom motorcycle shop. The shop ran with his distinctive style and did well. Two years later, he opened a bar next door.

When the Easyriders franchise plan came to an end in 2002, Rick renamed his motorcycle shop Strokers Dallas and kept on growing. His custom bikes started getting him noticed. In 2005, he was invited to participate in the Discovery Channel’s Biker Build Off. Shortly after that, Texas Hardtails debuted on the Speed Channel. The media attention hasn’t slacked off much since. Fairless appears regularly in everything from the enthusiast press to The Dallas Morning News and also did a drivetime radio show, The Texas Hardtails Scooter Show, on Dallas Live 105.3.

Spend some time with his bikes, and the attention he received is not surprising. With psychedelic colors and exaggerated lines, Rick Fairless custom motorcycles are hard to miss.

Pam is his most iconic bike, a neon-tinted pinwheel lollipop of a motorcycle with a curvaceous backbone frame wrapped around a peace-sign and flower-emblazoned V-Twin. Subtlety is not Rick’s strong suit.

The look, Rick says, stems from his childhood. “When I was a kid, everybody wore tie-dye T-shirts and Beatles boots. Tie-dye reminds me of being young in the ‘60s and ‘70s.”

“It’s like an old blanket or a pair of boots that just feels good when you wear ‘em.”

The thing that becomes clear after a few minutes of study of the Rick Fairless way is that dedication is part of the program. He likes to say that he has never called in sick a single day in his life.

“Get up early, work hard, and good things will happen,” is another favorite saying of Rick’s. His business ethics, unlike his bike designs, are old school and stone simple. Show up. Work hard. Treat the customer right.

Those basic ethics are the undertone to the savvy way he’s marketed his business. Rick is on television, radio, magazines and splashed all over the Internet. His customs draw your attention, his bar pulls in thousands of people, and his bike shows and bikini bike wash events catch those cow-eyed sorts the rest of the net misses. You simply can’t be in this industry and miss Rick Fairless.

He’s engineered this profile with smart marketing. This kind of thing doesn’t just happen. But he’s also done what most good salesman do — sell and promote the hell out of the assets he has at hand in a completely honest and straight-up manner. Here’s my product. I want you to buy it.

Just like his mother, Fairless is a straight shooter. He wants you to come buy his bikes, his beer and his tattoos. He expects you to have a good time doing it and works 14 hours a day to see that you do. And he happens to have a persona that plays in the media. He’s smart enough to know that, but that doesn’t mean the profile is a play.

“Somebody told me a few years ago, ‘Rick, man, you are the smartest guy in the motorcycle industry. You got that long hair and the beard and the Chuck Taylors and the tie-dye shirts and all that stuff. Man, the old hippie thing is a great marketing scheme.’”

“I said, well, I’d like to take credit for the marketing scheme, but I wasn’t really that smart. That’s just who I am. You know, I have long hair and a beard and I like Chuck Taylors. That’s what I wore in high school, and I wore tie-dye my whole life. I’m just an old hippie kind of guy.”