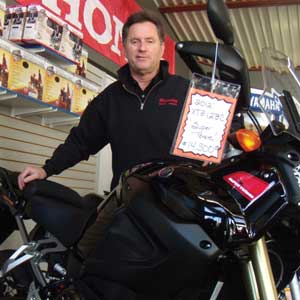 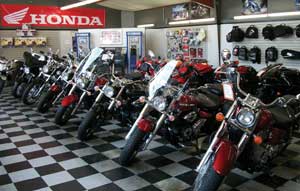 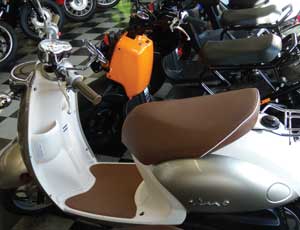 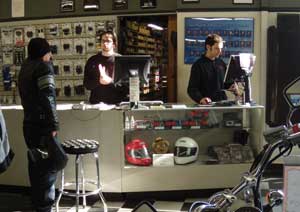 Berkeley Honda Yamaha, located near San Francisco , Calif., has parlayed a combination of off-road racing expertise and uncommon customer service into a long-term success.
The dealership started operations in 1973 and moved to its present address, a former bar and dance hall, in 1987. At the same time, Scott Dunlavey, then National flat track racing No. 96 and a serious desert racing competitor, became a partner in the business. There’s been some changes through the years, but Scott and his partner Karl Triest are still there.

Scott kept racing after he became a partner in the dealership. He won the Pikes Peak International Hill Climb five times and still holds a couple of records. His best result in desert racing was third overall and first in the Over 30 class in the 2001 Baja 1000. However, as time went on, Scott began to concentrate on the wrenching and organizing end of the race team effort.

In 2003, a few days after the birth of daughter Alexia, he was headed to Baja again, this time as technical advisor for the movie Dust to Glory. The next year, he was contacted by Bruce Ogilvie, Honda’s off-road racing manager, to build bikes for the Best of the Desert series. Scott soon became an integral member of Honda Racing’s support team. Unfortunately, Ogilvie contracted cancer, a blow to Scott, as they had become good friends. Honda has now turned over its off-road effort to multi-time Baja winner Johnny Campbell, and Scott continues to work with the JCR (Johnny Campbell Racing) team, which now also competes in the International Six Days Enduro and Dakar Rally racing.

It has been said that the best way to make a small fortune racing is to start with a large fortune, but Scott’s racing efforts have actually turned into a good thing for Berkeley Honda Yamaha.

“It brings notoriety for the business, you can’t buy that publicity!” he explains. “I don’t build bikes to compete with the JCR bikes — I don’t step on my own toes — but there are a lot of different classes out there. Right now, I am building and maintaining 15 different bikes in noncompeting classes. I sell the bikes, the special racing parts and the labor to build a competitive machine. All they want is turn-key perfect. It’s a neat little niche.”

Racers are not the only people who want a Scott Dunlavey special: “I was recently contacted by a guy from Texas who wanted a play bike, but set up like a racer.”

As an extra service, people who buy a racebike from Berkeley Yamaha get a cell phone number to call if things go wrong. The phone is often answered by Juliana Dunlavey, Scott’s wife and an integral part of both Berkeley Honda Yamaha and JCR-Honda.

“She is very resourceful, speaks Portuguese and Spanish fluently, and helps immeasurably with all the paperwork,” Scott says.

Excellent publicity is an obvious spin-off from a successful racing effort, but something usually not expected from selling scooters, Berkeley Honda Yamaha’s second profit center. However, an extra-mile customer service effort has paid unforeseen dividends.

“It’s a University of Berkeley athletic team rite of passage to buy a scooter from Berkeley Honda Yamaha,” Scott says. “At the beginning of each school year, I service the scooter, and the kid appears with a nervous parent, pays up and takes off. I promise each parent I will do what I can to help the kid if something goes wrong — just like I do with the racers I prep.

“One time, a scooter was stolen. The cops found the bike, and the next thing I know there is a hysterical mother on the phone from Southern California. The tow yard wanted $1,900 before they would give the scooter back. I told her to have her daughter show up, put her in a pickup truck with Freddy, one of my best employees, and told him to first evaluate the scooter and then start bargaining.”

“Freddy looked the scooter over, saw that the only damage was to the ignition, and waded in with the tow yard. He got them down to $425 and brought the scooter back. The mother posted on Facebook to all her friends and wrote a letter to Honda, praising Berkeley Honda Yamaha. The daughter was a junior on the soccer team. Again, you cannot buy that kind of publicity.”

Berkeley Honda Yamaha’s gift for publicity was tested in the recent economic downturn.

“I knew the good times wouldn’t last. I’m old enough to remember the recession in the early ‘80s,” says Scott. “But September 2009 was a shock. Before, we were making money hand over fist, then nose dive. We weren’t overextended. We paid off the building we had instead of expanding. Instead of building a Taj Mahal, we bought a nearby warehouse, with a long-term tenant that pays most of the mortgage. We store customers’ bikes there and the JCR racing setup. A tour company from Holland stores its bikes there between trips.”

“My partner and I evaluated every aspect of our business,” Scott continued. “We bought one-ply toilet paper instead of two-ply. We cut down on accessories: things that people buy off the net. As a result, we only had to lay two people off.”

Berkeley Honda Yamaha’s business  started an up swing last year, which has continued this year.

“Things are more profitable,” says Scott. “I hate to say it, but the tsunami in Japan put more value in the product. The factories were down 90 days, and the warehouses were cleaned out. Then Honda was making some of its hot models in Thailand , and there were floods.”

“I’m also seeing a shift back to an old-school appreciation for service. People will pay for good service. People are getting tired of dumb looks. They want to talk to someone who really knows and appreciates the product, someone who will engage with and empathize with the customer. It’s the relationships and the people.”

Scott has a somewhat different take on Internet stores.

“It’s just a new form of competition. We fight back with knowledge and competitive pricing,” he says. “People want a good buying experience. They want to ask questions. We make an offer of assistance, and they get to take their purchase home that day. A motorcycle dealer is one of the last personal businesses.”