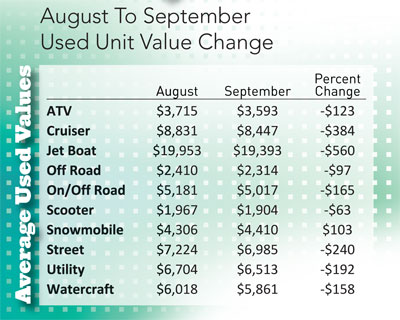 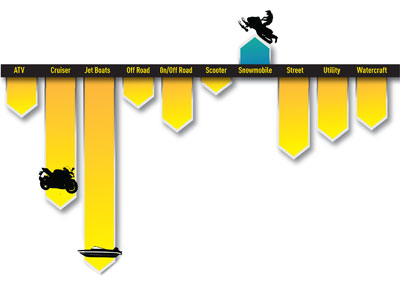 Prices in the powersports market have taken a serious and substantial downward turn this month. Normally we see prices for most of the powersports segments hit their peak in late June and early July, followed by a gradual decrease as fall draws near. Over the past few months we have seen this general trend hold up, but the most recent month-to-month changes have been more volatile than usual.

This month, values are down across the board, with the declines being larger than usual. The street bike, scooter and dual sport segments are down a little over 3 percent.  ATVs and utility vehicles, two segments that normally show increases at this time of year, are surprisingly down by 3.3 and 2.9 percent respectively.
Cruisers and off-road bikes are both down a little more than 4 percent. Even though they are not broken out separately, the domestic V-Twin market has taken a rather large hit in values this month. Prices are down by around 5 percent for most models, with only some of the smaller displacement “entry-level” bikes holding their value a little better.
Snowmobiles are up 2.4 percent from last month. Prices should continue to climb as dealers stock up on these units in anticipation of winter weather in many areas of the country.