“I am proud of the Polaris team and excited to see their dedication and hard work pay off as we returned the company to sustainable profitable growth in 2017. Indian Motorcycles massively outperformed the motorcycle industry, building on its existing momentum with a flood of product news and a very successful year on the race track. We accelerated North American demand for side-by-sides throughout the year led by strong retail sales of RANGER and Polaris GENERAL along with increased international sales growth in all regions outside North America. Additionally, we made significant investments and improvements in our people, processes, product innovation and quality, which led to notable execution improvements in our Off-Road Vehicle business, marked progress on the TAP integration, and a substantial upgrade of our quality control systems and infrastructure,” commented Scott Wine, Chairman and CEO of Polaris Industries.

Adjusted sales for the fourth quarter of 2017 was $1.430 billion, up 17 percent from the prior year period. The company reported Q4 net income of $31 million compared with net income of $63 million for the 2016 fourth quarter. The reported net income includes costs related to the wind down of Victory Motorcycles, Transamerican Auto Parts (TAP) integration costs, restructuring and realignment costs and impacts from U.S. tax reform. Adjusted net income for the quarter ended December 31, 2017, excluding these costs, was $95 million. 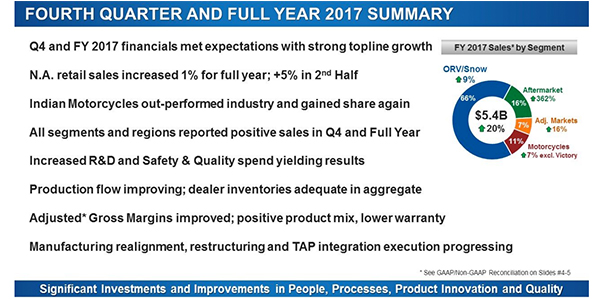 “Between strong demand and our intense focus on delivering high-quality products, in the fourth quarter we experienced some delays in getting certain model year 2018 Off-Road vehicles into showrooms, which ultimately affected our North American retail sales velocity. We are implementing corrective actions to ensure our dealers have the appropriate mix of inventory on hand as we approach the upcoming peak retail selling season,” commented Wine.

“Looking forward, I could not be more excited about the momentum we have built. Dealer inventory is approaching optimal levels, our delivery issues are being addressed, and our product innovation, which continues to resonate well with consumers, will receive an added boost from increased engineering spend. Furthermore, today we are unveiling our revised strategic framework, reaffirming our dedication to bolstering our market leadership position through a focus on superior productivity, safety, quality, and customer service. These updated goals and objectives emphasize top-line growth and margin expansion, which translates to greater than five percent compound annual sales growth and 15 percent compound annual net income growth over the next five years. The entire Polaris team is energized and committed to being the Best in Powersports Plus, growing adjacencies and global markets while simultaneously improving the safety and quality of our products. Ultimately we are striving to build a productivity powerhouse, driving accelerated earnings leverage and asset utilization, that delivers consistently increasing value for our stakeholders,” Wine concluded.

Polaris announced on April 24, 2017 that it was making changes to its network to consolidate production of like products and better leverage plant capacity. Changes include discontinuing manufacturing at its plant in Milford, Iowa, and transferring Milford production to existing Polaris facilities in Huntsville, Ala.; Roseau, Minn.; and Anaheim, Calif. Additionally, the company has transferred fabrication operations for its Pro Armor aftermarket products from its facility in Riverside, Calif., to its Transamerican Auto Parts facility in Chula Vista, Calif.

On January 9, 2017 the company announced its intention to wind down Victory Motorcycles operations. The company will record costs, anticipated to be in the range of $80 million to $90 million through 2018, associated with supporting Victory dealers in selling their remaining inventory, the disposal of factory inventory, tooling, and other physical assets, and the cancellation of various supplier arrangements. 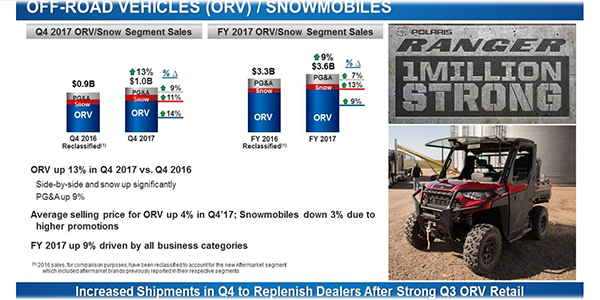 Snowmobile wholegood sales in the fourth quarter of 2017 increased 11 percent to $131 million, due to the timing of shipments. Polaris snowmobile retail sales were down low double digits percent during the fourth quarter due to low snowfall levels across the snowbelt regions in North America. 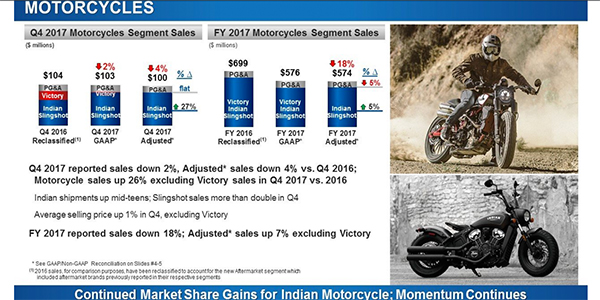 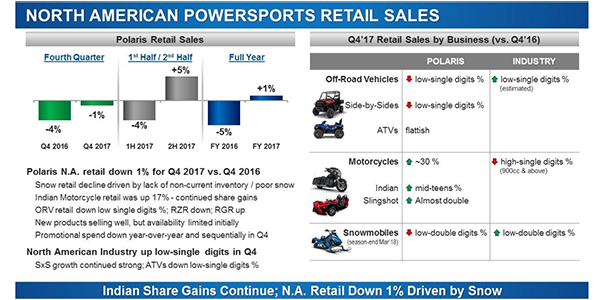 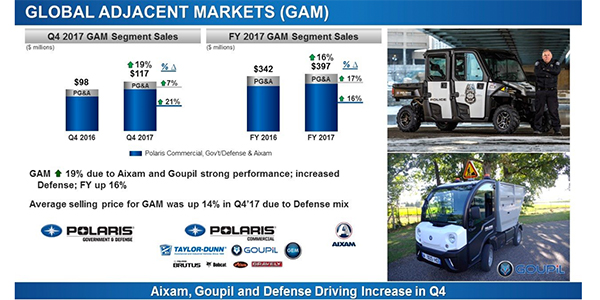 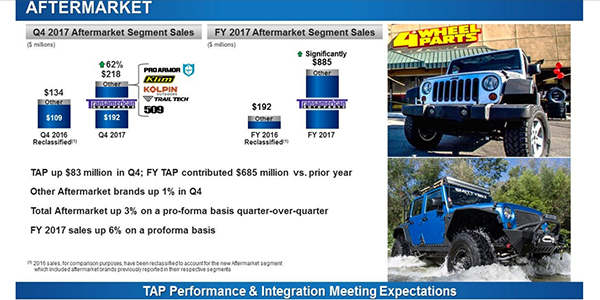 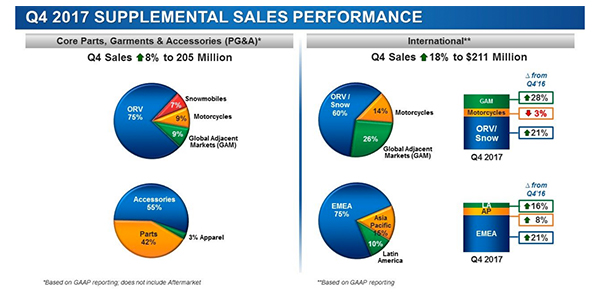 International sales to customers outside of North America, including PG&A, totaled $211 million for the fourth quarter of 2017, up 18 percent, from the same period in 2016. In the fourth quarter, sales in EMEA grew low-twenties percent, Asia Pacific increased high-single digits percent, and Latin America sales rose mid-teens percent. 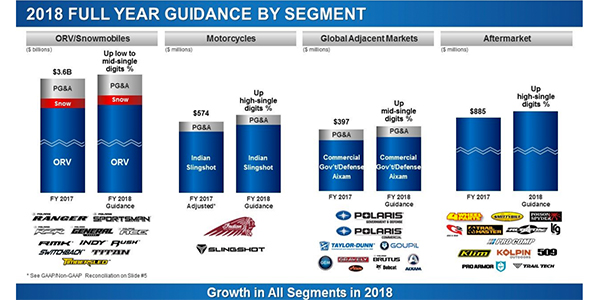 The 2018 full-year guidance takes into account the impact of the corporate tax adjustments included in the recently passed Tax Cuts and Jobs Act by the U.S. Congress. Full-year 2018 adjusted sales are anticipated to increase in the range of three percent to five percent over 2017 adjusted sales of $5.428 billion.