VARTA AGM powersports batteries has announced its co-sponsorship with the Jagged X Racing Team for the 2014 racing season. Jagged X Racing will be participating in five UTV competitions with the SCORE World Desert Championship series and six off-road races in the Best in the Desert series. 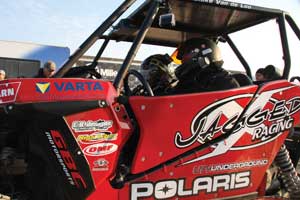 “We are excited to team up with VARTA powersports batteries. We are here to win races and need to have the most reliable battery available on the market,” said Bill Schueler, Jagged X Racing team owner. “The VARTA powersports battery is winning all the vibration, performance and torture tests we have thrown at it while racing in the desert.”

“We are proud and excited to be associated with this championship winning UTV racing team, and looking forward to a winning season,” said Doreen Lucht, VARTA powersports product manager.

The Suzuki GSX-R has always been about race-bred performance for the street. With its recent test at the Circuit Of The Americas (COTA) in Austin, Texas, Suzuki reinforced that message by showcasing 2014 Suzuki GSX-R1000 sportbikes alongside Suzuki GSX-R race bikes

that compete on national and international circuits. 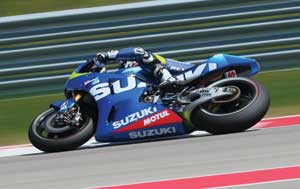 Following round two of the MotoGP race series held at COTA, April 13, Suzuki held a track test for the Yoshimura Suzuki Factory Racing team and its GSX-R1000 fleet competing in the AMA Pro Superbike series, as well as the Suzuki MotoGP racing team as it develops its all-new race bike for the elite international series. Built around an inline four-cylinder powerplant, like that in the Suzuki GSX-R, the new MotoGP race machine will help Suzuki promote its proven “Own The Racetrack” message worldwide.

The Suzuki MotoGP bike is scheduled to enter the 2015 race schedule. 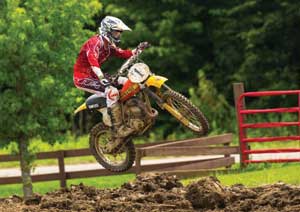 “It’s exciting to watch the vintage motocross series grow and improve," said AMA Motocross Operational Coordinator Alex Hunter. "Not only is online registration up and running, but we have Cernic’s Racing on board as a series sponsor, and several new venues are on the 2014 calendar."

Jeff Cernic, owner of Cernic’s Racing in Johnstown, Pa., is not only sponsoring the series, but he’s also a vintage racing enthusiast, with more than 100 vintage motorcycles of his own.

"It makes sense for Cernic’s Racing to be involved with the AMA Vintage Motocross National Championship Series with our long history of involvement in motocross," Cernic said.