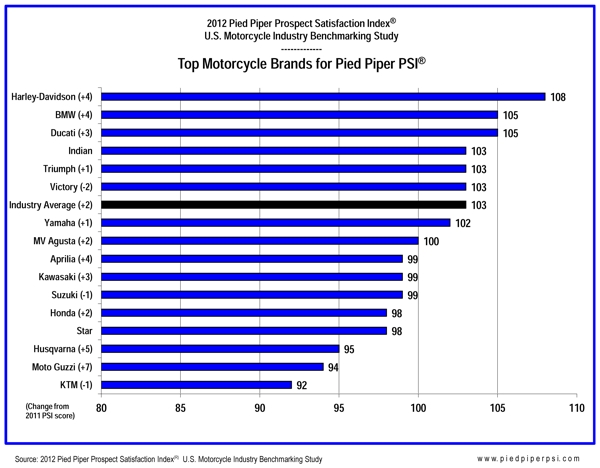 BMW and Ducati finished in a tie for second, followed by Triumph and the Victory and Indian brands from Polaris Industries, in a three-way tie for fourth. Industry-wide performance improved substantially from 2011 to 2012, with only three of sixteen motorcycle brands failing to achieve higher scores.

Harley-Davidson dealerships led all brands in 16 different sales activities such as offering test rides, obtaining contact information and asking for the sale. Brand performance varied considerably from brand to brand, with twelve different brands leading at least one sales process category. For example, Ducati, Husqvarna and Triumph dealerships were twice as likely to offer a brochure to shoppers than dealerships selling Suzuki, Honda or Kawasaki. Similarly, Harley-Davidson, BMW and Ducati dealerships were twice as likely to ask for contact information than dealerships selling Husqvarna, MV Augusta or Moto Guzzi.

“Today’s motorcycle salespeople have become much more effective at helping shoppers become buyers,” said Fran O’Hagan, President and CEO of Pied Piper Management Co., LLC. “For example, five years ago, a motorcycle salesperson would introduce him or herself to a prospect only six times out of ten. Today it is nine times out of ten.” Despite the progress, the study results also show that there is plenty of room for further improvement. Today motorcycle salespeople ask for contact information only 43% of the time, offer test rides only 16% of the time, and attempt to write-up the transaction only 29% of the time.