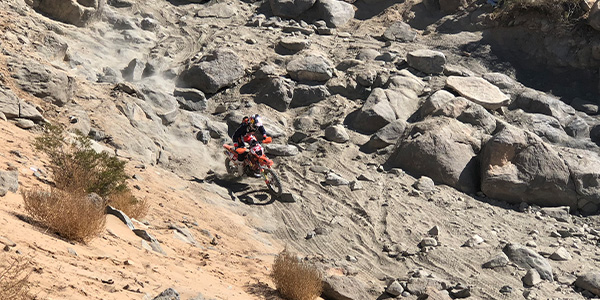 In 2017, amidst a down year for the overall industry, both Off-Highway and Dual-Sport/ADV Motorcycles were in the black with upticks of 2.5% and 10.4%, respectively, according to the latest Motorcycle Industry Council statistics.

Billed as the toughest extreme enduro race in the United States, the King of the Motos motorcycle competition kicked off the week-long King of the Hammers (KOH) event in Johnson Valley, California.

For the uninitiated, think Mad Max meets the Red Bull Romaniacs at Burning Man for the level of high-horsepower insanity the event.

Spread over two days, the three-challenge format, held in the first week of February, marked its seventh anniversary. And if the event is any indication of the health of the powersports industry, 2018 forecasts some very positive signs. The event featured a record number of entries in the motorcycle, UTV and 4×4 classes as well as a full vendor/sponsor midway. Big rigs, fifth-wheelers and Class A motorhomes were surrounded by every type of mechanized off-road machinery available. During pre-running, qualifying and the week of competition, “Hammertown” swells to more than 40,000 people, making the makeshift city on Means Dry Lake the second most populated town in San Bernardino County.

But for motorcycle purists, King of the Motos features a special kind of insanity. The skeptics who thought last year’s event was too easy caused former Dirt Rider editor, Dakar Rally competitor, riding school instructor and all-around sadist, Jimmy Lewis to tweet: “#2018kom is all work and no play. We promise!” From the nighttime start up a nearly impossible mountain face to the toughest desert loops this side of Dakar, the King of the Motos course was challenging enough for everyone.

“This time I think I’ve done it. I made it just tough enough,” said Lewis. And, in the loosely translated words of two-time Dakar winner Fabrizio Meoni, “Only one rider should finish the race then die after crossing the finish line.” Okay, so nobody died, but Lewis believes that extreme enduros should be really tough.

As if the course wasn’t tough enough, a premium was placed on navigational skills and a hidden waypoint caught out many of the top racers, including the winner and only one credited with completing the race, Cody Webb, who led the two-day/three “moto” event – in fact, he was the only rider to finish the entire 140-mile afternoon leg on the second day.

After chasing Webb up the mountain Saturday night and running with him for the first day leg, Rockstar Energy Husqvarna’s Colton Haaker was credited with second. Max Gerston rounded out the top three. Even though David Kamo found the waypoint that Webb and Haaker had missed, he was dropped to fifth.

For more details on King of the Motos and the UTV class at King of the Hammers, go to https://ultra4racing.com.

Off-Road Market a Bright Spot for Industry in 2017

With the off-road segment being one of the only bright spots for the industry in 2017, what this year will hold for dealers of these vehicles is looking up as well. In 2017, amidst a down year for the overall industry, both Off-Highway and Dual-Sport/ADV Motorcycles were in the black with upticks of 2.5% and 10.4%, respectively, according to the latest Motorcycle Industry Council statistics. But with the ups come some sobering issues that must be addressed. 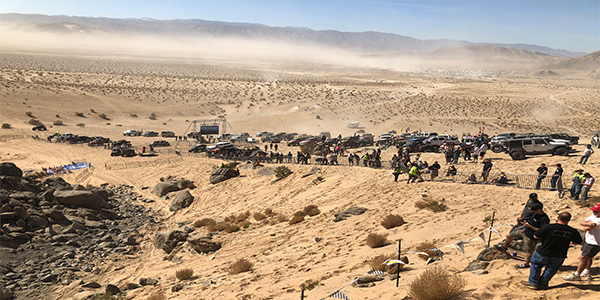 While the current administration has loosened some of the restrictions on access to public lands for OHVs, there is no guarantee these will last into the next president’s administration. Land access advocates believe enthusiasts and the industry should remain vigilant to protect the rights of recreational off-road riding for future generations. In fact, the MIC recently met with the Department of Agriculture and U.S. Forest Service officials to discuss the importance of outdoor recreation on Forest Service lands.

“Working as part of the Outdoor Recreation Industry Roundtable, we are better able to garner the attention of high-level land management agency officials and harness the power of a collective industry that generates $887 billion in economic impact and supports 7.6 million jobs across the country,” said Kathy Van Kleeck, senior vice president, government relations for the MIC. The MIC argues that national forests are vital to the industry and that it is a local and national economic engine.

Advertisement
In this article:King of the Motos, MIC, Off-Road, Outdoor Market

Off-Road Update: King of the Motos/King of the Hammers Conquers Competitors