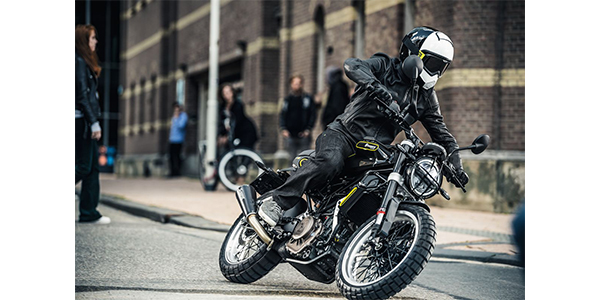 “It’s intended as a suburban bike. For example, if someone lives down a half-mile gravel driveway, they can get to work easily on the Svartpilen.”

One of the bright spots in the current motorcycle scene is the popularity of urban assault vehicles. The cafe racer look and its offshoots, bobbers and brat bikes, has been around for some time now, and the style has proved its staying power.

As a result, lightweight, powerful motorcycles with excellent handling to meet the demands of urban riders are appearing in the lineup of many of the OEMs. New entries in this category are Husqvarna’s Vitpilen and Svartpilen, single-cylinder machines with ultramodern styling.

“We started with the cafe racer look, but wanted to design something that was very modern and futuristic,” said Blaine Schuttler, managing director for Husqvarna North America.

Although Husqvarna is now known for its competitive enduro machinery and well-regarded motocross and supermoto offerings, in the days of yore, the company not only had a full line of road-going motorcycles, but competed in Grand Prix road racing events.

This company, based in Sweden for most of its existence, built its first motorcycle in 1903 and started racing seriously after World War I. Between 1931 and 1935, the company built winning Grand Prix bikes. Starting in the 1960s, Husqvarna’s lightweight two strokes cleaned up in motocross and Baja 1000 events. Today, the company is partnered with KTM and producing motorcycles in Austria, while continuing its winning ways in the dirt. One of the fastest growing motorcycle companies, Husqvarna has doubled sales in three years, with one-third of its production going to North America.

Going full circle, Husqvarna is now on the road again.

The 401 Svartpilen (Swedish for “black arrow”) and Vitpilen (“white arrow”) made their debut in prototype form at the 2014 EICMA (Milan) motorcycle show and caused a big stir. Then potential buyers waited … and waited … and waited.

The wait is now over and customers will see the bikes on the showroom floor. The 701, a larger version of both bikes powered by the same engine slotted into the KTM Duke 690, debuted at the 2017 Milan show.

“The Vitpilen takes its cues from the latest fashion and trends,” Schuttler said. “It is a unique riding experience, very narrow and light. There’s not much behind you, and there’s a high power-to-weight ratio. When you are in the saddle, the bike disappears beneath you, and you feel like you are flying along.”

The Svartpilen is inspired by Husqvarna’s Scrambler. The bike sports a more rugged look than the Vitpilen, down to the Pirelli Scorpion dual sport tires. It also has a more upright riding position, an advantage when splitting lanes and maneuvering through rush hour traffic.

Schuttler explained that the bike is intended as an urban “Mad Max” machine, good for weekend exploration on gravel roads and dirt roads and commuting on torn-up pavement.

“It’s intended as a suburban bike. For example, if someone lives down a half-mile gravel driveway, they can get to work easily on the Svartpilen.”

The target consumer for all four bikes is a new or returning rider, possibly with an off-road background.

The bikes were designed for a 20-something or 30-something who is interested in the latest fashion and trends, but who doesn’t have an unlimited budget. Power-to-weight ratio is more important to an urban rider than top speed, although both of the smaller bikes will do the ton easily.

Interestingly, a lot of the comment generated by the bikes has been published in non-motorcyling media, showing that the bikes have appeal outside the motorcycle community. Both Men’s Journal and the LA Times published very positive reports about the Vitpilen and Svartpilen.

Men’s Journal said, “…what distinguishes the modern Huskies from almost anything now available — is the design theme of ‘reduced to the essence,’ as Reinhold Zens, Husqvarna’s managing director, put it. “It has what a modern bike must have, but remains uncomplicated. There’s not much in the way of competitors.”

LA Times rode both the 401 Vitpilen and Svartpilen and commented, “…these unadorned motorcycles weigh 330 pounds, unfueled, and are very user-friendly.”

Schuttler is aware that most Husqvarna dealers are in rural or suburban areas, far from the urban centers where the Vitpilen and Svartpilen target consumer lives.

“We are planning on expanding to the top 40 U.S. and Canadian markets,” Schuttler said.

Prospective and current dealers will be supported with a marketing plan intended to increase sales and also to expand into the lifestyle market with clothing and accessories, with the slogan, “Real Street.”
The company now has a three- to five-year plan to implement its expansion.

“There will be additional Svartpilen and Vitpilen motorcycles,” Schuttler said. “We are planning on
a dedicated line of accessories, along with the garments.”

Schuttler points out that, as the Baby Boomers leave the motorcycling scene and new riders come in, the large, heavy cruisers and touring machines that were popular 15 years ago are increasingly seen as “Dad’s bike” or “Grandpa’s bike.”

“New riders don’t connect with that Sturgis image,” Schuttler said. “Trends have changed, and what is now popular is cafe racer style and the scrambler look. What is important to riders today is having fun with it.”

OEM Update: Husqvarna on the Road