With iconic brands such as Ducati and Triumph, NODT owner, 24-year-old Carl Peshoff and operations manager Kevin Butler have been making their mark in Ohio’s vast motorcycling scene. 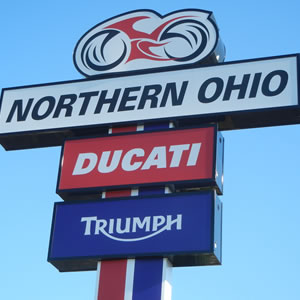 When Northern Ohio Ducati Triumph opened its doors to the public on January 8, 2011, few would have bet on an upstart dealership under the direction of one of the youngest leaders in the country, opening in the middle of a brutal Midwest winter, in such uncertain times for the industry. But sales are up over previous ownership, and the service department is backlogged.

With iconic brands such as Ducati and Triumph, NODT owner, 24-year-old Carl Peshoff and operations manager Kevin Butler have been making their mark in Ohio’s vast motorcycling scene.

Crooked River, the previous owner, had Ducati and also MV briefly, but that didn’t pan out too well for them, says Peshoff. “The owner was at a point where he wanted out of the industry, and I was at the point where I wanted in. But before I made the move, I wanted to make sure I had Triumph on board as well. Unfortunately in Ohio, Ducati alone is just not enough. So I pursued another excellent line – Triumph.”

Peshoff would become the youngest dealer that both Triumph and Ducati have ever had. “I started working in the industry when I was 18, so I’ve been doing it for a while, but when I go to dealer conferences, many people still think I’m a parts guy,” he laughs.

Peshoff says he was approved as a Triumph dealer months before purchasing Ducati from Crooked River. “Very long story short, Triumph simply said, ‘We’re on board!’ and that it didn’t matter if it took three weeks, three years or whatever – they wanted me as a dealer in the Akron area. They were seeking out a spot in the area, and it just so happened that the timing was right and they were patient enough to wait.”

After he purchased the dealership, Peshoff says it took him a year to find the right location. “We finally opened Jan. 8 of this year with both Triumph and Ducati.”

It’s been a great year for NODT so far, says Peshoff. “It has been off the charts for Ducati sales for the territory, and Triumph sales have been very strong as well. We’ve had an overwhelming response so far.”

Peshoff and Butler say their experience with Crooked River, known for its Ducati service, was valuable, but they have also made strides to reach the Triumph guys.

“We’ve gained a lot of Triumph service customers, not just the new bike customers,” says Peshoff. “Also with Ducati, our area has spread by probably two-fold since we’ve opened. Our sales have doubled this year compared to the last few years with the previous ownership.”

NODT has attracted customers from all over the region, and not just because they are the new game in town. Butler says that their success can be attributed to a combination of factors. “There haven’t really been any Ducati dealers who have closed except the one in Dayton, and we’ve gotten a few from them. It’s amazing how many new riders we get. You wouldn’t think new riders would gravitate toward Ducati as their first bike, but they have, and we’ve had a number of new riders go with a Triumph as well.”

NODT’s services and products cover pretty much everything from A to Z. A big drawing point is that they are one of the only OE dealers in the area with a dyno. “There are a couple of tuning shops with one,” says Peshoff. “So we have some competition from them, but we’re unique enough that we can do everything from new sales to service, parts and accessories to custom tuning and race engines and even vintage restorations.”

Butler says they are currently restoring a Triton, which is a Triumph engine in a Norton featherbed frame. “If you are into café racers, you’ll see that name pop up quite a bit,” he says. Butler’s own bike, a 2007 Monster S2R1000, recently won best European café racer from a Café Racer event at AMA’s Vintage Days.

Carrying just Ducati and Triumph, NODT is able to do things a little differently. “We have a unique opportunity any time a new bike launches,” says Peshoff. “For example, with the Diavel launch, there were only so many dealers in Ohio where you could go see one. We promote and cater these events and make it a big deal. It’s simple but effective.”

On the parts and accessories side, NODT carries Arai and HJC as well as Rev’it! apparel. “We’re the biggest Rev’it! dealer within three or four states,” says Peshoff. “We have quite a big inventory of Rev’it! stock. It’s a very high-end product like Dianese. It does very well for us. Most of us wear at least one or two of their jackets. I might have seven,” Peshoff laughs.

NODT also carries Ducati-specific Dianese products. “There are some customers who always want to have the manufacturer gear, something that says either Triumph or Ducati. The point I make is that we can choose anything we want,” says Butler. “I have a Dianese-made Ducati jacket, but I probably wear the Rev’it! more often. Not to say that the others aren’t great jackets, but if we have someone who is on the fence, we can show them the Rev’it! Stuff, save them 15-20 percent and still offer superior merchandise.”

NODT has a very low-pressure sales mentality. “It’s not that we’re not aggressive trying to sell a bike,” says Peshoff. “But generally speaking, a customer who comes in to look at a bike is not an impulse buyer. They’ve already made up their mind that they want a bike. We try to further educate them to choose the right bike.”

Because his sales team doesn’t rely on commission, Peshoff says it allows them to be unbiased and offer better customer service. “It doesn’t matter to us if you purchase a 696, 796 or a $40,000 1098R. At the end of the day, it comes down to which bike is right for you. The last thing I want is for someone to come back in three months and say ‘I like the bike, but I should’ve bought something else.’”
It seems this young team of passionate enthusiasts is making easy work of their new endeavor.