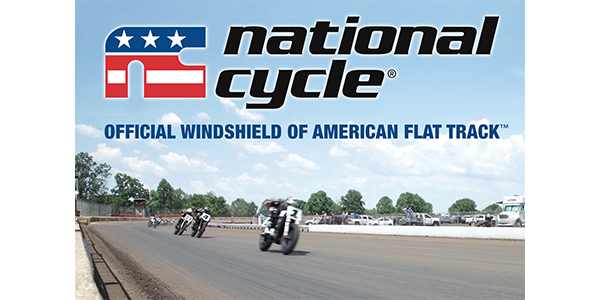 Founded in 1937, the Illinois-based company is the largest manufacturer of powersports windshields in the world. Indicative of the technology and innovation behind National Cycle products, the company holds more patents for design and production than any of its competitors.

Made to increase the rider’s enjoyment on the road, American Flat Track fans and motorcyclists from around the world enjoy National Cycle’s wide range of Quantum hard coated polycarbonate windshields.

“National Cycle is consistently recognized as an industry leader in the development of windshield technology,” said Michael Lock, CEO of American Flat Track. “As our audience continues to expand to include motorcyclists from all backgrounds and disciplines, it is important for fans of the sport that recognized industry leaders such as National Cycle be included in AFT’s family of partners.”

In 2018, National Cycle served as a sponsor to AFT Twins presented by Vance & Hines champion Jared Mees and heavily supported his campaign to victory. After a successful season, National Cycle looks to step up its support of the sport by joining AFT’s family of partners.

“National Cycle has been a passionate fan and supporter of professional flat track racing for much of its 82-year history,” said Barry Willey, president and CEO of National Cycle. “After years of sponsoring riders – including current No. 1 Jared Mees – we are proud to partner as the Official Windshield of American Flat Track. We enjoy all aspects of motorcycling, and we are thrilled to see the diverse brands and styles of motorcycles AFT fans are riding.”

American Flat Track will kick off its highly-anticipated 2019 season with the “Bigger, Better, and Faster” DAYTONA TT presented by Russ Brown Motorcycle Attorneys roaring into action under the lights of the Daytona International Speedway on Thursday, March 14, 2019.