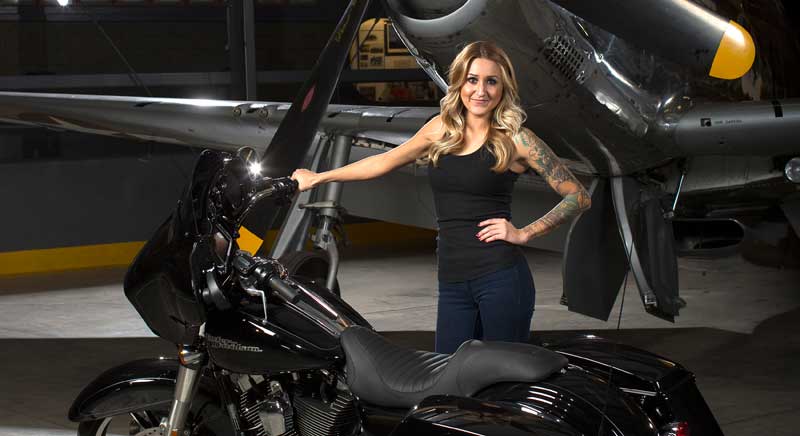 It isn’t every day that a company in the motorcycle industry celebrates its 35th anniversary, so when Mustang Seats hit this milestone this year, they really wanted to do something special.

Behind The Scenes For History In The Making

[dropcap]I[/dropcap]t isn’t every day that a company in the motorcycle industry celebrates its 35th anniversary, so when Mustang Seats hit this milestone this year, they really wanted to do something special. According to company folklore, the name comes from the legendary P-51 Mustang airplane, which naturally became the thematic element for the anniversary edition catalogs, advertising and soon to be revamped website. MPN got wind of what was up and was able to crash the party for a behind the scenes look at the making of 35 years worth of history!

In order to capture three and a half decades in high-flying style, Mustang turned to their friends in the industry for a little help wrangling a herd of custom bikes and a flock of vintage Mustang aircraft. Burly Brand, Performance Machine, Progressive Suspension, Roland Sands Design, Hot Bike Baggers magazine and Vance & Hines all stepped up. A complete squadron of bikes and the V&H race semi converged on the Planes Of Fame Air Museum in Chino, California, for the photo shoot.

Mustang brought in Nik Wogen from Design By AHAVA to shoot action photography and video of bikes in the hangars with the historic planes. This meant pressing the Burly Brand and Progressive Suspension types into doing some riding for the cameras (Progressive used the opportunity to shoot some stuff for their own 2015 catalog, including the cover). Mustang also hit up Mini Moto racer and former Miss Racer X Supercross Joey Sisco to be a stunt rider while Merissa Dale did double duty as a stylist and model. 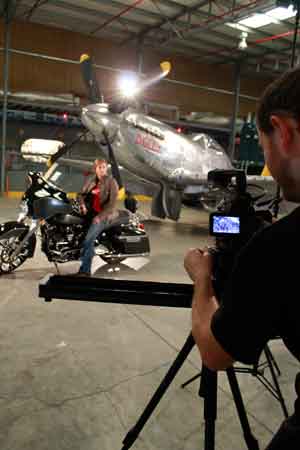 In addition to being home to several P-51Ds, the only surviving flying P-51A Mustang in the world – Mrs. Virginia – is based at Planes Of Fame, which made it the perfect venue for the photo shoot. As the mother of all Mustangs, Mrs, Virginia was also the perfect cover girl for Mustang’s 2015 full line dealer catalog.

[pullquote]“We owe a salute to the Planes Of Fame Air Museum for hosting our shoot,” says Mustang’s Business Development Director Marilyn Simmons. “They have one of the largest collections of flying warbirds in existence and are motorcycle riders themselves. In fact, Director Jerry Wilkins even does the annual Run For The Wall ride from Chino to the Vietnam Memorial in Washington DC on his Harley every year.”[/pullquote]

If you haven’t received your full line counter catalog yet, contact your Mustang rep. Consumer versions are also available as downloadable from Mustang’s website, mustangseats.com.

If you ever have a chance to ride around Southern California, do yourself a favor and drop in at the Planes Of Fame… there are even a couple of motorcycles stashed away in the hangars. You can see Mrs. Virginia, Spam Can and a couple other airworthy P-51 Mustangs in person or visit them here for a virtual tour: planesoffame.org.