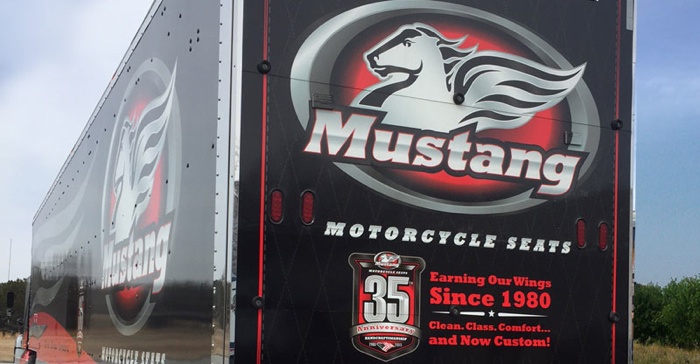 New products, a new look and a new catalog commemorating Mustang’s 35th anniversary milestone kick off a yearlong celebration from the seat manufacturer, all starting at Bike Week when the campaign officially takes off on March 6th in Daytona. 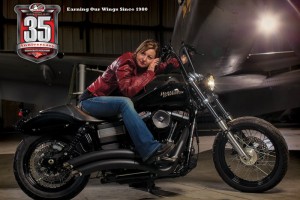 Mustang Motorcycle Products, LLC is ready to celebrate the launch of its 35th anniversary in style. The iconic “Pegasus” winged horse logo is set to soar to new heights in 2015. New products, a new look and a new catalog commemorating this milestone kick off a yearlong celebration from the seat manufacturer… all starting at Bike Week when the campaign officially takes off on March 6th in Daytona.

“Daytona is when the riding season takes off and it is the perfect venue to launch our anniversary campaign,” explains Mustang Marketing Director Marilyn Simmons. “Our name comes from the legendary P-51 Mustang airplane, so that became the theme for our high flying 35th Anniversary celebration. We are proud of the fact Mustang seats are still handcrafted in Three Rivers, Massachusetts, and we really wanted to spread our wings to commemorate this historical happening. Now is the time to get the message out to a new type of rider who might not know Mustang’s history or quality.” 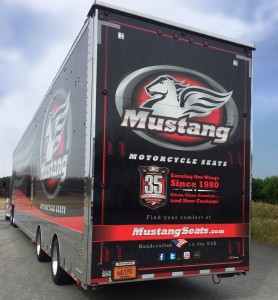 A two-pronged campaign will see Mustang’s big rig (complete with a 35th Anniversary Logo wrap) headquartered in its customary location at Daytona International Speedway, with a second front taking off at J&P Cycles Destination Daytona Superstore in neighboring Ormond Beach, Florida. “Stop by either Mustang display to see all the latest seats and pick up the 2015 catalogs hot off the presses,” says Simmons.

Daytona Bike Week will also see the first of the 5-For-35 seats awarded to the winner of the ongoing social media campaign. Even if you can’t ride to Daytona for Bike Week, you are still eligible to enter the contest as Mustang will be giving away a free seat to the top vote-getter during the run-up to five different rallies this year.