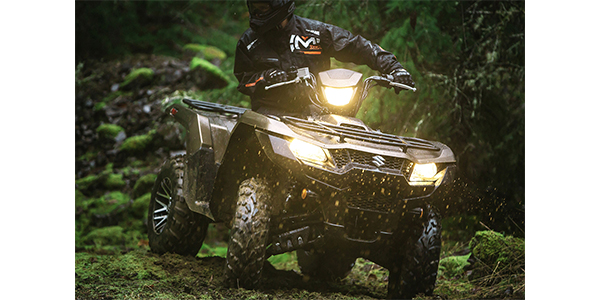 The Motorcycle Industry Council joined the Outdoor Recreation Roundtable in welcoming the final report on the first-ever government statistics recognizing the outdoor recreation industry as a significant contributor to the U.S. economy. The report also found motorcycling/ATVing to be one of the fastest-growing core outdoor recreation activities, growing 8 percent over the previous year.

“This report confirms what the MIC has always believed, that Americans truly love the fun and adventures that motorcycles and ATVs can bring to their lives, and they are looking to share their passion,” said Tim Buche, MIC president.

The Outdoor Recreation Satellite Account report, funded by the departments of the Interior, Agriculture and Commerce, was released by the Commerce’s Bureau of Economic Analysis. It notes that the outdoor recreation industry accounts for 2.2 percent of U.S. gross domestic product in 2016 and that outdoor recreation contributes more than $734 billion to total U.S. gross output, which is the total value of domestic goods and services produced by an industry.

This economic contribution level is greater than other key economic sectors, including the mining, utilities and chemical products manufacturing industries. In addition, with 4.55 million jobs, the outdoor recreation sector generates a level of employment similar to other major job creators in the United States, including hospitals, transportation and warehousing, and educational services.

Thursday’s release was the final revised report, following prototype statistics released in February. The updated report reflects comments and feedback solicited by BEA and submitted by organizations representing the powersports industry, as well as other groups in the outdoor recreation economy.

The release of the data is a milestone for the outdoor recreation industry, which has long called for its sector to be formally included in government economic analysis. ORR leaders organized a Capitol Hill briefing Thursday with key federal officials, including Commerce Secretary Wilbur Ross, Bureau of Economic Analysis Director Brian Moyer and a video message from Montana Sen. Steve Daines. Speakers discussed the significance of the final data and shared insights on the outdoor recreation economy’s impact on the United States.

“This report represents official federal government recognition of the outdoor recreation industry, including the powersports industry, as a significant force in the U.S. economy,” Buche said. “We need our nation’s leaders to do everything they can to keep the economic engine running at full throttle, including creating common-sense policies to expand public access, modernize infrastructure and remove barriers to effective public-private partnerships. We thank the teams at the Bureau of Economic Analysis and the Outdoor Recreation Satellite Account for their work in making today’s report possible.”

The BEA’s analysis also found outdoor recreation to have one of the nation’s strongest wage growth rates, at 4.3 percent. This rate surpasses the overall U.S. wage growth of 2.8 percent during the same period of 2015-2016.

“The contributions of powersports and other outdoor recreation industries to our nation’s GDP has more than pulled its weight. We’ve been a major engine behind the recent economic growth rate,” said Callie Hoyt, manager of federal affairs at the MIC. “Outdoor recreation deserves to be a priority at national and state levels because of its importance to the overall economy, especially in rural communities. The MIC, working with ORR, will keep pushing growth-oriented policies that will ensure the powersports and outdoor industries remain a strong GDP contributor and jobs generator for years to come.”

ORR strongly supports continuing and expanding the Outdoor Recreation Satellite Account. Senate legislation funding the Department of Commerce operations for fiscal year 2019, beginning Oct. 1, specifically includes on-going funding for ORSA and its expansion to generate state-level projections. ORR has called upon the House to follow the Senate’s lead on ORSA and thus implement the Congressional direction contained in the Outdoor Recreation Jobs and Economic Impact Act of 2016.

The full report issued by BEA can be found here.