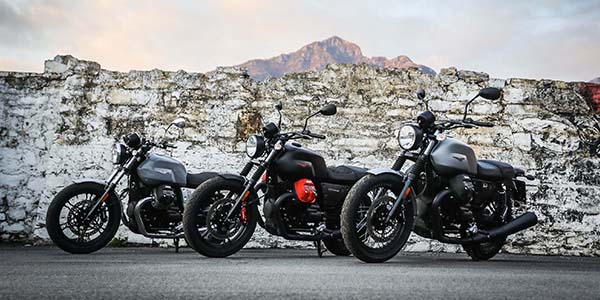 In 2021, after many years manufacturing on the shores of Lake Como in Northern Italy, Moto Guzzi will celebrate its 100th year anniversary.

In 2021, after many years manufacturing on the shores of Lake Como in Northern Italy, Moto Guzzi will celebrate its 100th year anniversary.

Unique among European manufacturers, the company doesn’t specialize in one particular type of motorcycle and attracts all kinds of customers, from those looking for racing and sport bikes to those wanting a touring motorcycle. If a rider wants a classic bike, a dual-sport bike or a cruiser, Moto Guzzi makes those as well.

The commonality among Moto Guzzi customers is that they are enthusiasts who are looking for something a little different. Moto Guzzi attracts customers who look for unique, extremely recognizable motorcycles with a strong heritage and classic styling. Underneath the classic look is state-of-the-art technology. Moto Guzzi customers appreciate the modern drivetrain, electronics and brakes wrapped in an old school package.

Moto Guzzi has had a lot of experience adapting itself to the market. The oldest European motorcycle manufacturer still standing, the company got its start after World War I, manufacturing a reliable, powerful four stoke and promoting it with racing successes. After World War II, the company met the then-overwhelming need for inexpensive, reliable transportation with small motorcycles that proved very popular. As conditions improved, the company returned to racing, notably with the futuristic V8 Grand Prix machine.

In the 1960s, Moto Guzzi won a competition to design a police motorcycle with an opposed, shaft driven V-twin motor. This bike formed the basis for the Ambassador and Eldorado tourers that won a loyal American following during the ’60s and ’70s. Most Moto Guzzis since that time have had shaft final drive. The Ambassador and Eldorado were followed by the V7 Sport and the LeMans sport bikes — worthy entries into the sport touring field. At present, Moto Guzzi manufactures a range of tourers (California and Eldorado), cruisers (Audace and MGX) and classically styled bikes (V9 and V7), selling them worldwide.

With Piaggio leadership and marketing power behind Moto Guzzi since 2004, the brand has been on a roll. In the last two years, Moto Guzzi has sold more motorcycles and increased its U.S. market share.

In 2007, Moto Guzzi announced the Stelvio, a heavyweight dual sport machine, which, like the touring Guzzis before it, attracted a loyal following. When the model was shelved in 2016 due to the expense of revising the engine to meet Euro4 standards, fans clamored for a replacement.

This past winter, Moto Guzzi announced the V85 TT (TT stands for Tutto Terreno, meaning “all terrain” in Italian), a midweight adventure bike which is unlike anything else on the market.

“The Adventure segment is one of the few with a positive trend and our brand-new V85 TT is ready to play an important role,” said a company spokesperson.

In March, Moto Guzzi brought journalists from the larger North American motorcycle media groups to Is Molas, Sardinia (an island off the coast of Italy), where they had the opportunity to experience the motorcycle in a scenic, rural area. Riders were able to test the V85 TT on and off-road. The resulting reviews have been overwhelmingly positive. One of the main themes expressed by the journalists involved was: “Moto Guzzi is definitely entering in a new era!”

The V85 TT’s 853 cc oil/air-cooled motor, with two valves per cylinder and a six-speed gearbox produces a claimed 80 bhp; 90% of its torque is available at 3,750 rpm. Guzzi engineers retained the iconic shaft drive, while aggressively reducing overall weight. Testers praised the build quality, the powerful, tractable engine, the comfortable riding position, both on and off-road, and the cornering ability of the motorcycle. Moto Guzzi is taking this good publicity and running with it.

As a first order of business, the company started a USA V85 TT National Tour in April. Each week saw the national marketing team at two of Moto Guzzi’s dealerships around the country. Customers, prospects and fans were able to experience and test ride the motorcycle, “while attending a beautiful Italian-style event,” in the words of a company spokesperson. The last stop was on July 3. In January 2019, Moto Guzzi launched a pre-booking website where customers were able to pre-order the motorcycle and the full accessories lineup. The V85 TT has just arrived into the U.S. market and the first batch is already sold out.

The attention given to the launch of the V85 TT does not mean Moto Guzzi has neglected the other models in its lineup. Extensive promotional activities are planned for the next year, and, according to the company, an announcement will be released shortly.

Moto Guzzi also shares the industry concern about the lower number of new riders. The company says it is one of their first priorities. Dealers have found that several Moto Guzzi models are an unintimidating step up from the Piaggio-built Vespa scooters that are often a new rider’s entry into the wonderful world of motorcycling. As usual, Moto Guzzi is doing things a little differently: Piaggio Group said that it is analyzing different industries and business models in an effort to bring innovation into the motorcycling industry. The company wants to simplify how customers can get in contact with its products and states some important news will come soon.

The strengths of the Moto Guzzi brand have always been its unique look and its flexible approach to the market. These strengths are helping the brand advance in the current changing — and challenging — motorcycle industry. As the spokesperson stated, “We want to keep growing, offering to our customers unique motorcycles and services that take into consideration the evolution of the market.”