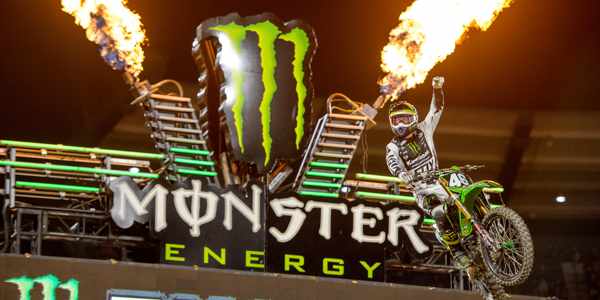 Monster Energy Pro Circuit Kawasaki’s Justin Hill claimed his third straight victory of the season, bringing Pro Circuit’s win record to 251. With the win, Hill took over the championship point’s lead and the coveted red plate. Teammate Austin Forkner was forced to retire from the race early after an opening lap crash.

Hill had all the cards stacked against him in Oakland, but he wasn’t going to let sickness or a treacherous track keep him from his third-straight win. He started the day with the fastest lap time in qualifying and then went on to take second in his heat race. In the main event, he avoided a second turn pileup and pushed his way to the front, leading wire-to-wire. It wasn’t without drama as he had gone down late in the race but had enough of a gap to keep the lead and go on to win.

“Tonight was crazy because the track was really rutted and if you lost focus for a second you could go off the track,” said Hill. “I was sick all week and didn’t ride. My team was great. They gave me the confidence I needed to get through this tough day.”