Some people are good at keeping a lot of balls in the air, and Michael Aron, proprietor of Mojotown Motorcycle Gear Shop in San Rafael, Calif., is one of them. He is not only managing his retail store, but also running an ad agency, named Mojotown Multi Media, promoting RaceFuelZ, an all natural recovery and endurance drink, and overseeing a nonprofit, the Mojotown Project, that connects nonprofit groups with marketing resources and the funds to obtain them. In his spare time, he does a little acting in films. 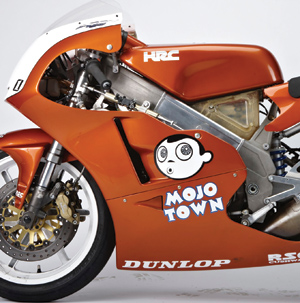 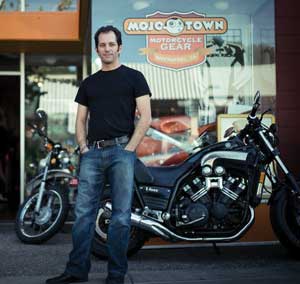 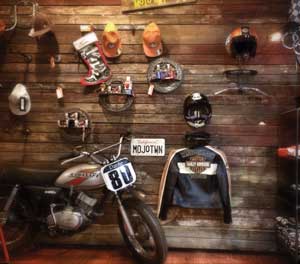 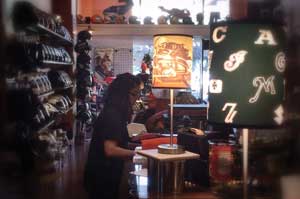 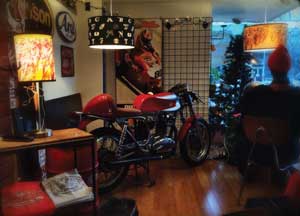 All this activity would stress many people, but Michael positively thrives on his juggling act. He explains that he grew up in Indianapolis and was inspired by the sights, smells and sounds of racing at the Speedway. Moving to California, he started racing motorcycles at Sonoma Raceway (also known as Sears Point) and working for the San Rafael Yamaha motorcycle dealership.

Michael had done quite a bit of design work, and, through his racing, met Larry and Eraldo Ferracci. A conversation at the racetrack led to him moving to Pennsylvania for a position as art director with the Fast by Ferracci team.

Michael moved back to California in 2000 and helped launch the Hotwire discount travel website that year. His Mojotown creative services agency had been started as a part time venture in 1998, and went to full time in 2001. The agency specializes in Web design and corporate identity for small to large business as well as motorsports marketing for companies.

The ad agency was (and is) doing well, but Michael has always been fascinated by the idea of opening his own dealership. Fast forward to 2009, when the idea of a parts and accessories store became a new focal point.

“Find a hole and fill it,” is an old retail slogan. In Michael’s case, the hole was the lack of a nearby place to buy tools, parts, helmets, boots and gloves. Michael was getting tired of having to travel to San Francisco to buy gear for his racing effort, and assumed that if he was being inconvenienced, that many motorcycle enthusiasts in the area were being inconvenienced, too.

Mojotown Motorcycle Gear store was launched five years ago at a location near a freeway. This location was not what Michael wanted on several levels, and he moved to his present premises about a year and a half ago.

The store is now on a major shopping street in an upscale area. One of the major incentives to rent the space was a large parking lot available to the customers. Parking is difficult in this area, as in most urban areas, with ever-present parking meter enforcement, and the parking lot takes stress out of the shopping experience. “The parking lot is trailer-friendly,” he notes. “We have race teams coming through to buy stuff, and they can drive in with their trailers.”

Another reason why Mojotown moved to the present location was the look of the store. “This place has high ceilings that give it a gallery feel. I wanted people to feel the motorcycle culture. I wanted a homey, comfortable feeling that would be different from most motorcycle stores.”

Mojotown sells boots, helmets, accessories, OEM and aftermarket parts, specialty tools, racing oil, clothing, and motorcycle related art, as well as used consignment motorcycles. If something is not in stock, it will be cheerfully ordered, with overnight delivery available for many items.

The selection of items the store offers is chosen with the intention to cater to all motorcycle enthusiasts and provide something for everyone. When Michael first went into business, he also offered service on motorcycles, but quickly discontinued it. “Service opens too many issues,” he says.

“I am surprised at the random lot that comes in the door. Our clientele has evolved slowly, but it is now about half street and half dirt riders. There are a few cruisers and Harley guys. With the new location, we get increased foot traffic, and a lot of street riders. We get a lot of kids, too – there is a used kids clothing place nearby, and when mom is shopping there, guess where the kid is!”

“This location gives me an outlet for reclaimed motorcycle art. Non-riders will walk past the store and see something in the window that will make a great gift for someone. This location is also more female-friendly, and I have sold more stuff to women in one year at the present location than in three years at the old place.”

The store is relatively small. Despite its artistic look, it is actually very carefully laid out to display the maximum amount of product that can be shown without making the space look crowded. Merchandise is displayed on different levels, there is a tiny try-on area with large mirrors and chairs, and art for sale is attractively arranged on the walls. “I try to run an efficient shop. Much of our stuff is available on order. If we see a demand, we start stocking the items. We want to be a miniaturized better version of the large accessory shops, with unique merchandise and more individuality.”

Advertising is mostly word of mouth. Mojotown sponsors racers and track days, and has a lot of support among the large local road racing and off road competition communities. Michael has, of course, designed his own website, which takes advantage of new technology to feature maximum understandable content in a minimal space. Featuring a constantly shifting home page, the idea is to engage the reader as much as possible.

The website has constantly updated racing news, photos and information on the consignment motorcycles, and alerts to the latest products from Mojotown’s suppliers. Cartoons (designed and sketched by Michael and completed by his artists) add a touch of humor. The shop’s Facebook page is also constantly updated. Michael and staff check email and the different on line rating sites on a regular basis, adding comments and contacting the few customers who have complaints. “We try very hard to take the highest road possible.” The result is excellent online ratings.

“Retail can be a nightmare, but I have deep relationships with the motorcycle culture on a pro level. I have a concept of mixing business with pleasure, and it is working. We are enthusiasts, and it is always fun to be here.”