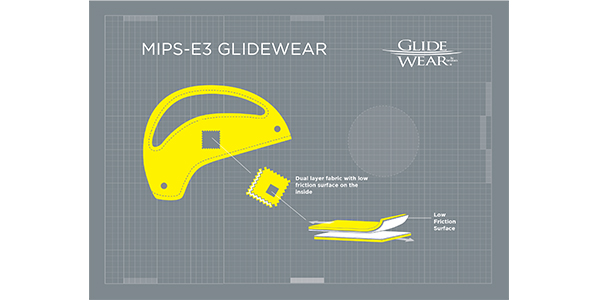 MIPS announced that the MIPS-E3 GlideWear liner has won the End Products category of the Show Stopper program for IFAI in Dallas.

MIPS, the world leading brain safety technology company, announced that the MIPS-E3 GlideWear liner has won the End Products category of the Show Stopper program for IFAI in Dallas.

Established in the world of neuroscience with over 20 years of research, the first MIPS-equipped helmet was released on the market in 2007. The brand reached four brands by 2011, and by 2015, MIPS had sold more than a million MIPS BPS (Brain Protection System) units to 28 helmet brands. The exponential increase in customers continues and MIPS now works with over 60 helmet brands across numerous disciplines. Up to and including 2017, the company has sold more than 5.4 million MIPS BPS units, which have been implemented in as many helmets in the snow, bike, equestrian and motorcycle segments.

The MIPS – E system is a fabric based low-friction solution positioned between the helmets comfort padding and the energy-absorbing liner. The fabric’s properties allow for a local relative motion of 10-15mm, which can reduce the rotational motion transferred to the brain in an accident.

“We at MIPS see this as great honor and are very happy that this solution will come in to the spotlight. Fabric based low friction layers are probably something we will see more of in the future, because of GlideWears great sliding ability’s and that it is an easy material to work with,” said Johan Thiel, CEO of MIPS.

MIC: Industry Unites to Prevent 100% Tariffs
Connect with us